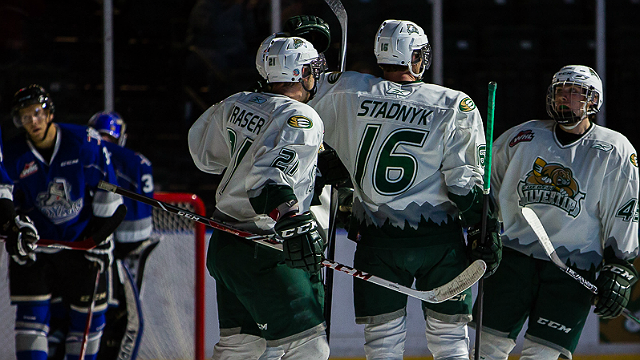 EVERETT, Wash. – Dawson Leedahl scored a goal and added an assist while 12 different players registered at least a point to help lead the Everett Silvertips over the Victoria Royals, 5-4 in the Silvertips’ preseason opener at XFINITY Arena on Friday.

The Silvertips, opening their annual preseason tournament, ripped off four unanswered goals before holding off a late charge by Victoria in the final ten minutes of regulation. Patrick Bajkov’s two-man advantage goal stood as the game-winner, and Austin Lotz stopped 39 shots for the win in net.

Both teams earned several good looks at the net in the first ten minutes and Lotz produced two marvelous saves, including a diving save to his right to foil Victoria’s bid for a 1-0 lead. The Royals eventually grabbed the lead with 59.8 seconds left in the first period on a wild carom off the backboards, and Matthew Phillips snuck a wrister by Lotz from between the circles.

On the next shift, with 44 seconds left, newcomer Connor Dewar set up Leedahl at the base of the right circle for a 1-1 tie on a wrist shot through traffic.

At 11:21 of the second period, Carson Stadnyk pushed the ‘Tips ahead 2-1 on a one-timer in the slot, set up by Leedahl’s feed from the left goal line with the shot trickling off Coleman Vollrath’s arm. Gunnar Wegleitner followed with a rebound at the left circle, over Vollrath’s blocker, for a 3-1 edge at 15:24 after Cole Chorney was stopped on the first attempt.

Then, Yan Khomenko – making his Silvertips preseason debut as a CHL import draftee – got on the board for a 4-1 lead with a backhanded wraparound attempt which banked off Vollrath, attempting to cover the left post.

Victoria stopped their bleeding with 10:47 left in regulation on a four-on-four goal, a rebounder potted by Keith Anderson for a 4-2 deficit after Lotz stopped the initial point shot. Then after a Silvertips penalty kill, and the game seemingly available for the full taking, the Royals stormed back to within a goal on Chaz Reddekopp’s shorthanded breakaway goal – on a two-man disadvantage – at 12:26.

However, the Silvertips restored their lead to two on the next power-play set-up at 13:04, when Bajkov was credited with the five-on-three goal which deflected off Vollrath’s back and into the net. Everett escaped a late penalty and six-on-four situation, but Regan Nagy stashed a backhander under the crossbar with 37.1 seconds to slice the deficit to 5-4.

Lotz still needed to produce two impressive saves in the final seconds to preserve the lead, and the Silvertips killed the clock with a Leedahl empty net attempt that just sailed wide at the final horn.

Vollrath took the loss on 24 saves.

The Silvertips Preseason Classic presented by Holiday Inn Downtown Everett continues tomorrow, starting at 11:30 a.m. with three consecutive games at XFINITY Arena. The Silvertips wrap up the day’s action with their next game, 7:00 p.m. against the Spokane Chiefs. Tickets and tournament packages are available at www.everettsilvertips.com or by visiting the box office, or Silvertips offices at XFINITY Arena during normal business hours. All preseason tickets are available by visiting the Silvertips website.