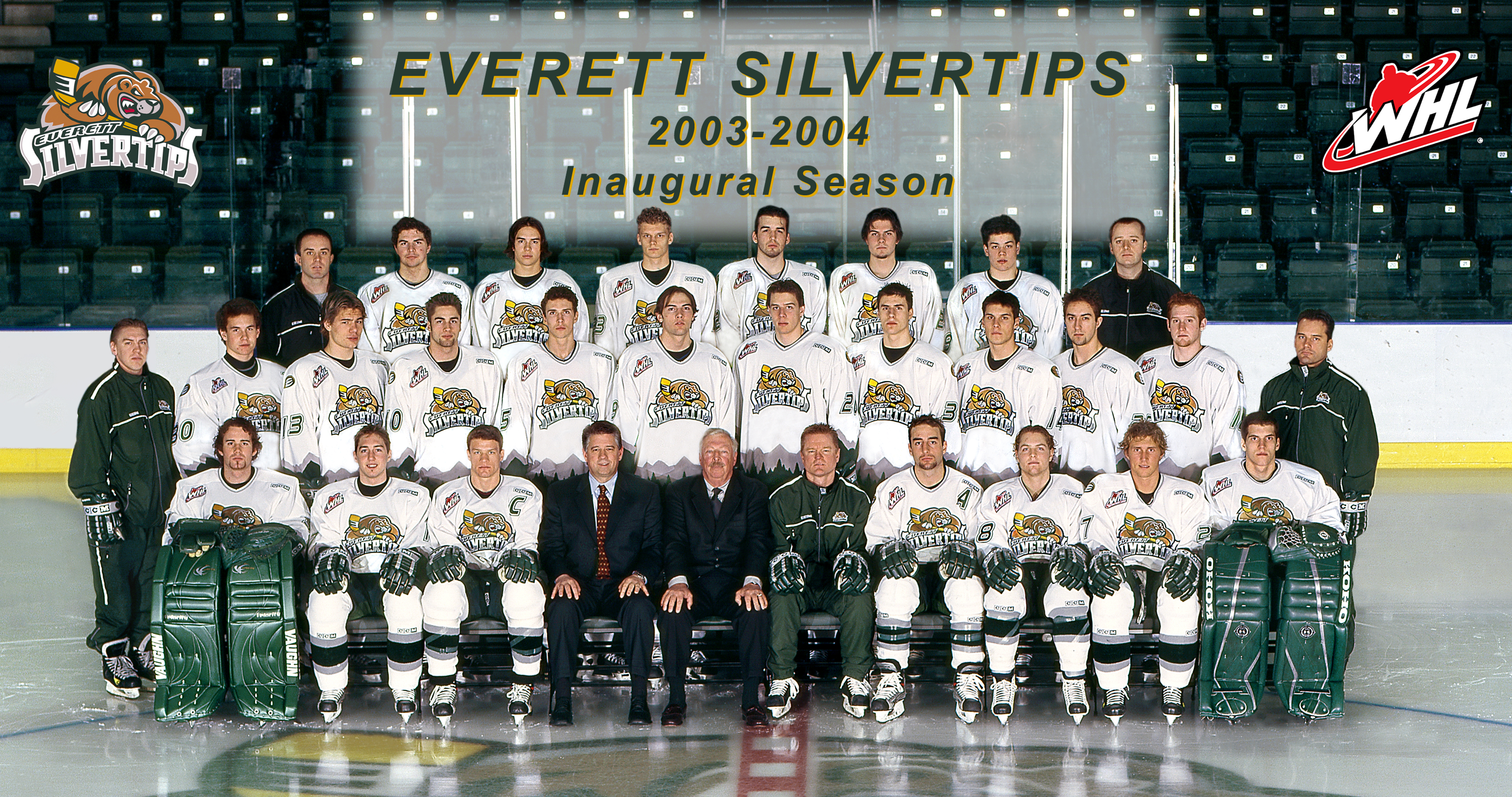 The Everett Silvertips inaugural season in 2003-2004 captured the hearts of the entire Everett and Snohomish County communities. In their first-ever season in the Western Hockey League, the Silvertips broke many expansion records in the regular season and enjoyed a playoff run that will never be forgotten by Silvertip fans as the Kevin Constantine-led hockey club scratched and clawed its way to the 2004 WHL Finals.

2003-2004 REGULAR SEASON LEADERS
John Dahl (25 goals, 19 assists) and Riley Armstrong (18 goals, 26 assists) finished the 2003-2004 season tied as the Silvertips’ leading scorers with 44 points each. Dahl led the hockey club with 25 goals and Armstrong led the Silvertips with 26 assists. Mitch Love (12 goals, 15 assists) led all Silvertips defensemen in scoring with 27 points and led the club in penalty minutes with 163. Forward Curtis Billsten (8 goals, 12 assists) led the Silvertips in plus/minus rating with a +14 and led the team in rookie scoring with 20 points.

Goaltender Jeff Harvey was solid between the pipes, posting a 24-15-5 record with a 1.97 goals-against average (2nd in WHL), .926 saves percentage (3rd in WHL) and 3 shutouts. Michael Wall, who was acquired in a trade with the Prince George Cougars in October, made a nice contribution with 12 victories, a 2.27 goals-against average (5th in WHL), .920 saves percentage (7th in WHL) and 2 shutouts.

THE 2004 WHL PLAYOFFS
The Everett Silvertips put together a fantastic run through the 2004 WHL Playoffs.  The Silvertips swept the Spokane Chiefs 4-0 in the first round and defeated their rivals north of the border, the Vancouver Giants, in six games (4-2) in the Western Conference Semifinals. The Silvertips then battled the defending WHL Champion Kelowna Rockets in the Western Conference Finals and found themselves down 3-1 in the series heading into a must-win Game 5 in Kelowna, BC. The comeback started on an overtime goal by Bryan Nathe in Game 5 that sent the series back to Everett for Game 6. The Everett Events Center was rocking for Game 6, and the Silvertips did not disappoint as John Dahl tallied the game-winning overtime goal to even the series at three games apiece and force a deciding Game 7 in Kelowna. On Tuesday, April 27, 2004 the Silvertips defeated the Kelowna Rockets 2-1 in overtime to win the Western Conference Championship and a trip to the 2004 WHL Finals. Jeff Schmidt tallied the biggest goal in franchise history in overtime and goaltender Jeff Harvey made 35 saves to help lead the ‘Tips to the record-breaking victory.  Everett faced off against the high-powered offense of the Medicine Hat Tigers in the WHL Finals. The Tigers won the Championship series in four games, but the Silvertips showed that Everett would be a force in the Western Hockey League for years to come.

2004 PLAYOFF SCORING LEADERS
The Silvertips were led in scoring by John Dahl (3 goals, 13 assists) in the 2004 WHL Playoffs with 16 points. Marc Desloges (7 goals, 5 assists) led the hockey club in goals with 7 and Dahl led the team in assists with 13. Ivan Baranka (3 goals, 5 assists), Bryan Nathe (2 goals, 6 assists) and Mitch Love (2 goals, 6 assists) led Silvertips defensemen with eight points each. Forward Mark Kress led the team with a +11 rating.  In goal, Jeff Harvey finished the postseason with 11 victories, a 1.86 goals-against average, .938 saves percentage and 3 shutouts to finish off his stellar WHL career.