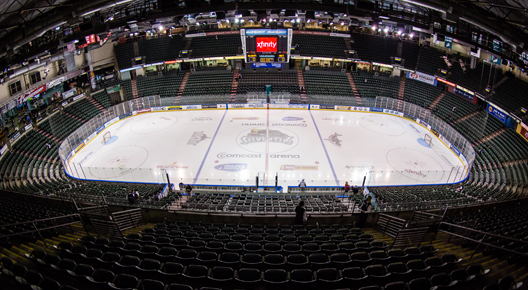 EVERETT – The Everett Silvertips have announced our 2014-15 promotional schedule including fundraisers, theme nights and giveaways for the upcoming WHL season.  In addition to many of the promotions Silvertips fans have come to know and love over the years, the team is also introducing a number of new theme nights including a “Fans’ Choice Promo” to add to the atmosphere inside Comcast Arena this season.

Everett’s 36-game home schedule begins with opening night on Friday, Oct. 3 vs. the Kelowna Rockets.  27 Silvertips home games will be played on Fridays, Saturdays and Sundays up through the home finale vs. the Victoria Royals on Saturday, March 21.

Headlining this year’s returning promotions is our annual “Pink the Rink” night vs. Seattle on Oct. 25.  In conjunction with Safeway and Providence Regional Medical Center, Pink the Rink has raised over $300,000 to fight breast cancer locally over the last five years.  Also returning this season are other popular community-oriented benefit nights including our “Fill the House” for Housing Hope on opening night, the annual Christmas House Holiday Drive highlighted on Dec. 13, Local Heroes Night on Jan. 17 and Navy Night on Feb. 20.

We’re encouraging fans to get involved and have some fun with our planned theme nights, including the return of “90’s Night” and our “Classy Hockey Game”.  We’ve also added a “Purple vs. Crimson Night” ahead of the big game pitting Washington vs. Washington State on Nov. 28, “Ugly Sweater Night” tying in with our holiday festivities on Dec. 13 and both a “Guys Night Out” on Oct. 10 and “Girls Night Out” on Oct. 24.

Also new for this season is a theme night that will be determined by a vote of Silvertips fans.  We’re accepting suggestions for our first-ever “Fans’ Choice Promo Night” to be held on Feb. 28 vs. Prince George.  Submit your ideas via social media by using the hashtag #FansChoicePromo when you interact with us on Twitter and Facebook and we’ll select finalists for a fan vote that will determine the theme for that game!  Don’t be afraid to get creative and keep the suggestions rolling in.

Single-game tickets for our two opening weekend home games (Oct. 3 vs. Kelowna and Oct. 4 vs. Portland) are available now online (www.ComcastArenaEverett.com), by phone (866-332-8499) or at the Comcast Arena box office.  Single-game seats for all over regular season home games go on sale on Thursday, August 28.

Visit everettsilvertips.com for news and updates on Silvertips training camp, the 2014 Holiday Inn Preseason Classic tournament and our 2014-15 home opener vs. Kelowna on October 3.  For more information, call the team office at 425-252-5100, “like” the Everett Silvertips Hockey Club on Facebook or follow @WHLSilvertips on Twitter.