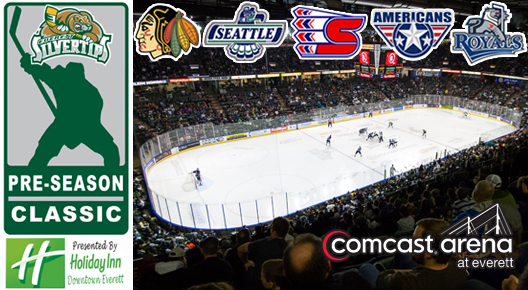 EVERETT – Teams around the Western Hockey League announced their 2014 preseason schedules Tuesday, with the Everett Silvertips releasing a seven-game exhibition schedule similar to the one the team has played in recent years.  The Silvertips will host the Holiday Inn Preseason Classic tournament at Comcast Arena for the 11th consecutive season, welcoming the WHL’s four other U.S. Division teams plus the Victoria Royals for the second year in a row.

Labor Day weekend finds the Silvertips once again hosting a total of nine games over three days during our annual Holiday Inn Preseason Classic tournament.  The ‘Tips will be in action each evening at 7:00 pm, facing the Victoria Royals Friday, the Spokane Chiefs Saturday and the Portland Winterhawks on Sunday.  The tournament also features the five visiting teams rotating through early games at 11:30 am and 3:00 pm each day from Friday through Sunday.

The following weekend, Everett continues its exhibition docket on the road with a pair of games in the Tri-City Americans’ annual preseason tournament at the Toyota Center.  The ‘Tips will face the Seattle Thunderbirds on Friday, September 5 and the Kootenay Ice on Saturday, September 6.

The Silvertips again play a home-and-home series with the rival Seattle Thunderbirds to complete the preseason schedule, hosting the T-Birds at Comcast Arena on Friday, September 12 and traveling to the ShoWare Center in Kent for their exhibition final on Saturday, September 13.

Silvertips preseason ticket packages are available now:  CLICK HERE for more information or to get yours.  Preseason packages include all nine games during the Holiday Inn Preseason Classic PLUS our last home preseason game against Seattle on Sep. 12 for just $60 per seat when you purchase by August 25!

Single game tickets for the 2014 preseason will be available starting Tuesday, August 5.  Seating for all exhibition games at Comcast Arena this year will be general admission, with no reserved seating available during the preseason.

Visit everettsilvertips.com throughout the offseason for news and updates on our summer appearances, the NHL Draft, CHL Import Draft and much more.  For more information, call the team office at 425-252-5100, “like” the Everett Silvertips Hockey Club on Facebook or follow @WHLSilvertips on Twitter.