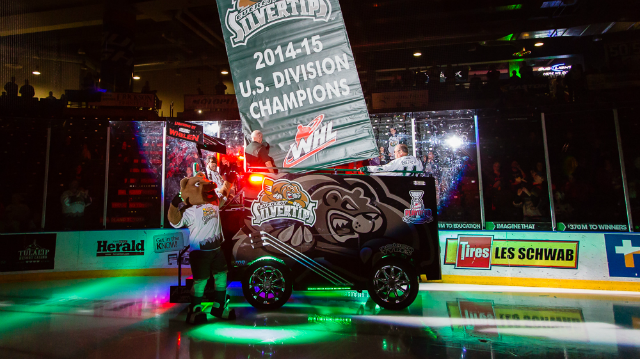 EVERETT, Wash – The Everett Silvertips (@WHLSilvertips) announced their Giveaway and Promotional Schedule for the 2015-16 season, their 13th in the Western Hockey League, opening Sept. 25 at Prince George and followed by the Silvertips’ home opener at XFINITY Arena on Oct. 10 against Spokane.

Highlighting the calendar is the Silvertips Annual “Pink the Rink” game against Seattle on Oct. 24 (7:05pm) presented by Providence Regional Medical Center and the Safeway Foundation, which will feature a new Silvertips pink theme jersey while using fundraising to support breast cancer prevention and awareness. Game worn jerseys will be available for purchase via silent auction following the game and each bidding winner receives a photo opportunity with their respective Silvertips player, on-ice as part of the jersey distribution. Silvertips signed pink pucks will be available at XFINITY Arena each game night for $20 and proceeds benefit Providence Comprehensive Breast Cancer. Pink the Rink glow sticks, courtesy Providence Comprehensive Breast Center and the Safeway Foundation will also be given away to the first 5,000 fans in attendance.

Further details will be announced soon and current information is available here.

The Silvertips home opener at XFINITY Arena, Oct. 10 vs. Spokane (7:05pm), is “Fill the House” night, benefiting Housing Hope and presented by BECU. The meeting is the first between the teams since last season’s first round series, won by the Silvertips in six games – and included a triple overtime victory (the longest game in Silvertips history). Ticket packages include a Silvertips “snapback” hat (while supplies last) and are available for $22 in the upper level and $25 in the lower level. Proceeds of ticket sales will benefit housing opportunities for emergencies and low-income families.

As part a season-long Silvertips Concert Series, Opening Night will feature a live performance from the music of “High Voltage.” More information and ticket packages for Opening Night are available by visiting here.

Several theme nights also involve creative opportunities for fans to get involved at XFINITY Arena this season, including “80’s Night” and “Office Party Night,” (Dec. 5), a Halloween Costume Contest the night prior to Halloween (Oct. 30), the return of the Purple vs. Crimson game (Nov. 25) as a salute to the Washington vs. Washington State rivalry, a special Christmas House and “Ugly Sweater Night” to coincide with the Silvertips return of the Teddy Bear Toss game (Dec. 19), and “Star Wars Night” (Jan. 31). “Country Night” (Jan. 16 vs. Seattle) features a postgame concert with country artists “Jones & Fischer,” who hail originally from Everett.

New to the theme night schedule this season are special events such as a New Year’s Day game (2:05 pm) against Kelowna, the “Throwback Classic” featuring classic jerseys worn by the Silvertips and celebrating the 50th season of the WHL. Another weekday matinee start at 2:05 pm (Jan. 18) features the only visit of the season by the Saskatoon Blades, an “Education Day” inviting local area schools for a “field trip” game which includes a salute to Dr. Martin Luther King Jr.

Also included on the calendar is a two-part mesh t-shirt giveaway series featuring Silvertips defenseman and NHL draftee Noah Juulsen (Nov. 7 vs. VAN) and goaltender Carter Hart (Feb. 13 vs. VIC), courtesy BECU and free to the first 500 kids (12 and under) in attendance. A three-part Silvertips Player Magnet giveaway on Dec. 4 (vs. PG), Jan. 31 (vs. SPO) and Feb. 28 (vs. TC) will be available to the first 1,500 fans in attendance courtesy Pratt Pest Management. A three-part Silvertips Glow Stick Giveaway will also be featured on Dec. 5 (vs. VAN), Jan. 30 (vs. SPO), and Feb. 20 (vs. SEA), free to fans in attendance courtesy Dwayne Lane’s Family of Auto Centers.

Fan Appreciation Night (Mar. 18 vs. VIC) will feature a postseason awards ceremony, in addition to a team photo giveaway.

Click here for details on the Silvertips promotional schedule.

Single-game tickets for all games at XFINITY Arena are on sale now and can be purchased online at www.xfinityarenaeverett.com, by phone at (866) 332-8499 or at the XFINITY Arena box office during normal business hours.