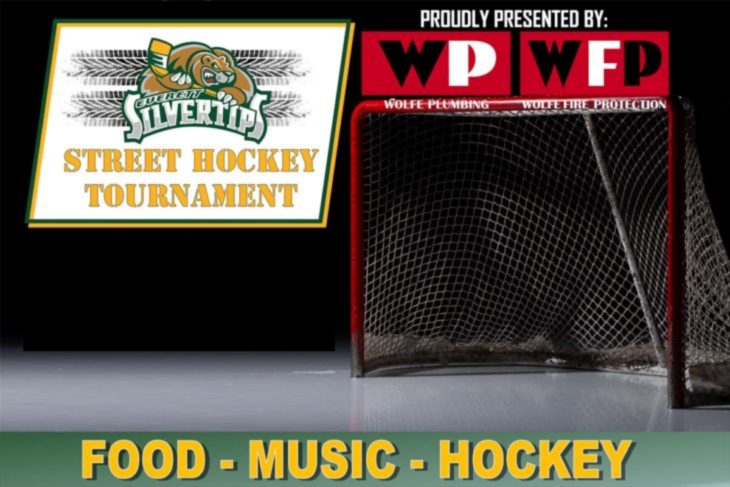 The Silvertips Street Hockey Tournament, proudly presented by Wolfe Plumbing & Wolfe Fire Protection, is back and coming to Angel of the Winds Arena in downtown Everett on Saturday, July 13th with the partnership of Wolfe Plumbing.

We’re excited to bring hockey to the heart of Everett…and we want you to be there by forming a team and taking on challengers from all around Silvertip Country!  The day-long tournament will take place on the main arena floor and in the secured parking lot of Angel of the Winds Arena.  Bring the family because we’ll have food, games, music and much more.

Each team will be comprised of five to eight players participating in 4-on-4 game play with four players & one goalie on the court at a time (adult rec division will use shooter tutors instead of goalies). The Silvertips will provide the nets, boards, and officials, while it is up to the teams to provide sticks, helmets (required for 16 & under) and USA Hockey approved goalie equipment.  We recommend athletic shoes, shin guards and gloves.

The competition will feature a round robin-style schedule, culminating in a single elimination playoff. Teams will be placed in the following divisions: 14U, Recreational Adult (15+) and Competitive Adult. To ensure good competition and a manageable schedule, we may place a cap on the number of teams in each age group.

Are you ready to battle for Silvertip Country street hockey supremacy?

CLICK HERE FOR PLAYER WAIVERS
DUE NO LATER THEN 30 MINUTES BEFORE FIRST GAME.