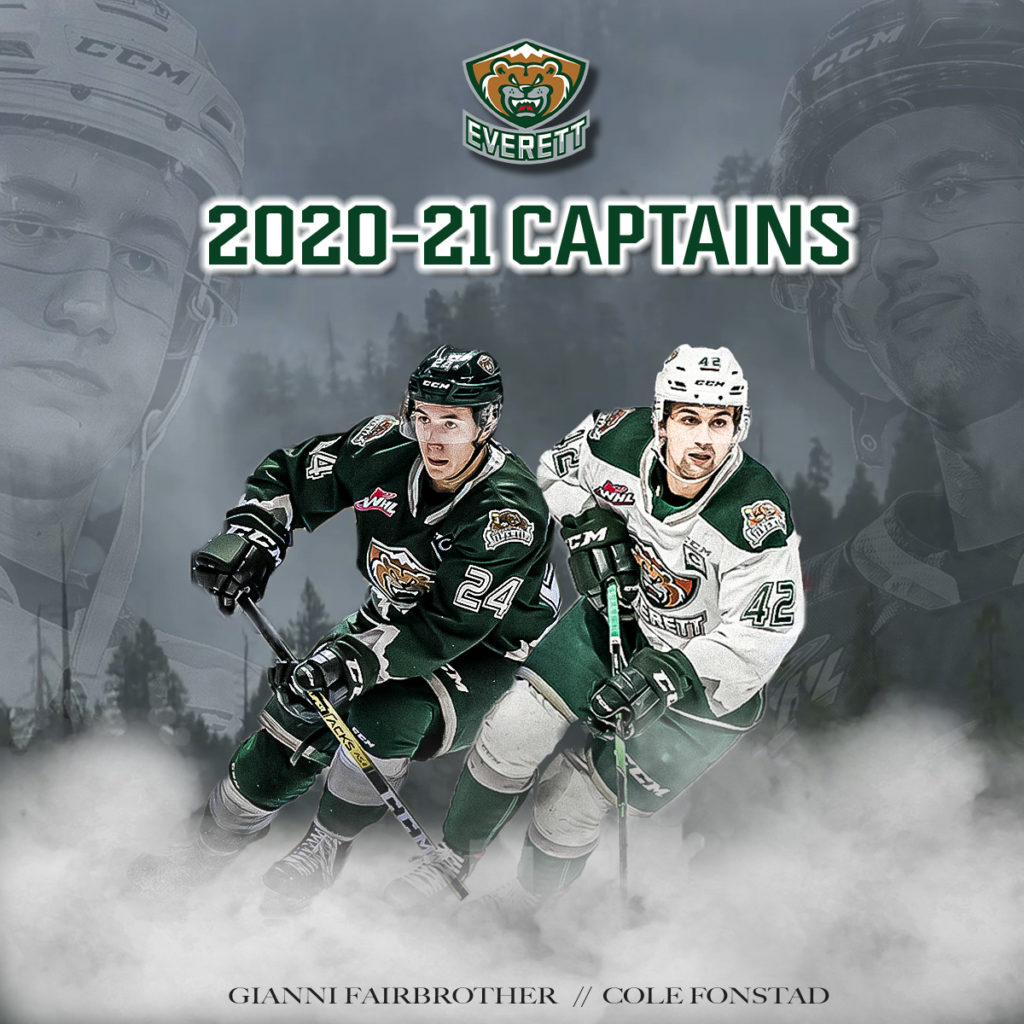 Succeeding Bryce Kindopp, the 17th captain in Silvertips history, both players will open their final WHL season as 2000-born players coming off a 46-win campaign in 2019-20, before the season was closed due to the coronavirus pandemic. The Silvertips are expected to announce their complete leadership group before the start of the season, Mar. 19. A full schedule will be announced soon.

“Gianni and Cole have demonstrated a tremendous sense of work ethic and abilities that validate their success in the Western Hockey League,” said Silvertips head coach Dennis Williams. “As they operate as an extension of our coaching staff, we’re confident both will uphold the core values of our group. Their unique qualities complement each other, they provide continuity from last year’s leadership group and make a great fit with mentoring our returning players and incoming first year Silvertips.”

“When you enter our dressing room and glance at the captain’s wall, it energizes you to deliver the same effort, consistency, and energy as those before you, and I’m excited for that opportunity,” said Fairbrother. “I looked up to Noah Juulsen, Kevin Davis, Matt Fonteyne, Connor Dewar, and Bryce Kindopp. To follow in their footsteps is a privilege. They taught me about the importance of making your teammates feel valued. We had a great group last year, and a lot of guys returning who have taken big steps with progress. I can’t wait to get started with this season along with a great teammate in Cole.”

“To be named co-Captain is a huge honor and an incredible opportunity to help lead our team through a pretty challenging period ahead,” said Fonstad. “I’ve always been inspired to serve as a leader and to do this with a great teammate in Gianni is an exciting chance to make an even greater positive impact. It didn’t take long for me to understand the culture that helps us thrive and feel like a fit here. We had a great year last year and have a lot of great teammates back in place.”

The North Vancouver, British Columbia native earned a career high 36 points (10g-26a) with a +23 rating in 2018-19, helping guide the Silvertips to the U.S. Division title for the third straight year. While he earned five assists in 33 games, his first WHL season, he returned from injury to earn a goal and three assists with a +7 rating in the 2018 WHL Playoffs, helping guide the Silvertips to the Western Conference title.

As a 15-year old defenseman, Fairbrother made his debut in the WHL Playoffs with the Silvertips and has amassed 10 multi point games.

“Gianni has evolved into a seasoned and battle-tested defenseman who brings a ferocious and relentless approach to the game,” said Williams. “He wears his heart on his sleeve, is a vocal leader in our dressing room, and commits to playing with intensity. He has learned well under our previous captains, brings a high compete level that has become infectious across our team, and we’re looking forward to that familiar approach in his role.”

Fonstad, 20, was last year named Silvertips co-Most Valuable Player with 65 points (13g-52a) in 51 games after being acquired from the Prince Albert Raiders on Oct. 13, 2019, also earning a +34 rating as assistant captain. He finished the season tied for 12th in WHL scoring with 74 points (15g-59a) with teammate Bryce Kindopp, was tied for third in league assists (59), was fourth in power play assists (25), and was second on the program in power play points (27).

He led the league with the longest assist streak of the season at 14 consecutive games when he notched 20 assists from Oct. 11 through Nov. 30 and posted 16 multi point games.

The native of Estevan, Saskatchewan helped guide the Raiders to the WHL title and berth in the Memorial Cup in 2018-19, ranking third on the program with 73 points (29g-44a), third in assists (44), second in power play assists (14), and fourth in power play points (19) in 67 games. His 73 points matched his career high previously set in 2017-18 with the Raiders when he also led the club with 52 assists, appearing in all 72 games.

En route to the WHL title, the 5-foot-10, 180-pound forward had a goal and an assist in the WHL Championship Series against Vancouver and earned a goal and a pair of assists in three Memorial Cup games. He earned an invite by Team Canada to the 2019 World Junior Summer Showcase, a step in the roster selection process for upcoming IIHF World Junior Championship.

“Cole has made a seamless transition from entering our program just over a year ago to becoming a respected leader in our group,” said Williams. “His talent makes everyone better with a solid foundation of commitment to coming to the rink every day. He’s an influential leader by example, consistent in his habits, and provides valuable experience from capturing the Ed Chynoweth Cup and playing in the Memorial Cup with Prince Albert two years ago. He fully understands what it takes to reach that level of excellence, a pivotal trait in reinforcing our culture.”

Fonstad has 11 points in 28 career postseason games and was originally selected by the Montreal Canadiens in the fifth round (128th overall) of the 2018 NHL Draft. Entering his final WHL season as an NHL free agent, he has notched 247 points (76g-171a), a +57 rating, and 15 game winning goals in 270 career WHL games.

On loan to the Estevan Bruins (SJHL) before the start of the WHL season, he has 10 points (5g-4a) in six games.