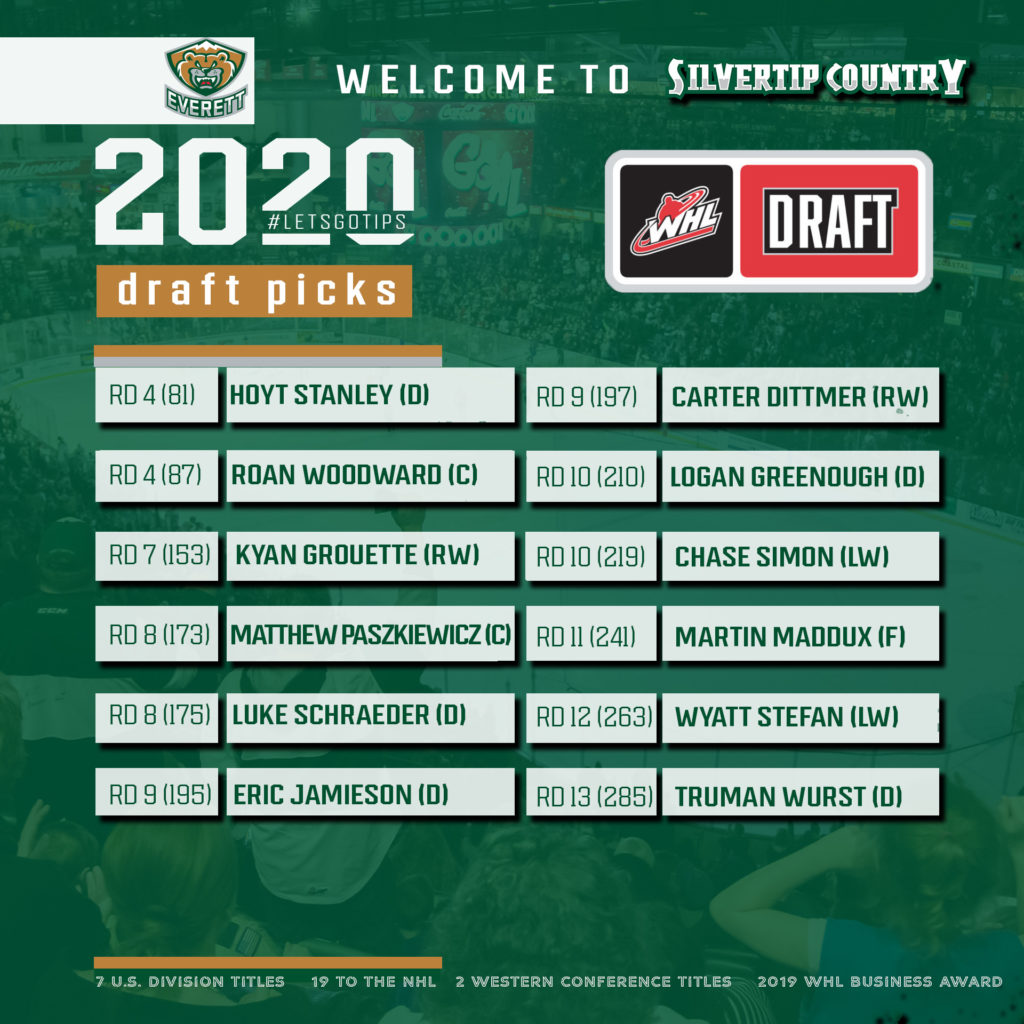 In total, the Silvertips selected seven forwards and five defensemen.

“As an organization we’ve continued to pursue a mission of gathering talent that excels with skill, speed, and hockey sense,” said Silvertips general manager Garry Davidson. “This year’s Silvertips draft class was no exception. We had to wait a little longer this year to get started, but we are very happy about the players we came away with today who have terrific potential of contributing soon. Our first two selections, Hoyt Stanley and Roan Woodward, have demonstrated exceptional qualities and we were thrilled they were still available.

Despite the unusual circumstances that cancelled playoffs and provincial camps, giving many scouts one last look at potential prospects, credit is due to our scouting staff, head scout Mike Fraser, and director of player personnel Alvin Backus. They were prepared for today, and put in a ton of hard work to ensure the boxes were checked.”

“This was a very unique draft for many reasons tied to the present day we’re in, and despite that variable, we’re very delighted with how today turned out for us,” said Fraser. “This year’s draft was deep with talent – and while that continues to be an ingredient that we prioritize, the extra challenge for us this year was to dig deep, put our mind to possible players available at the slots we had available, and do rigorous homework to make sure our lists were aligned similarly across our staff. Credit goes to everyone on our hockey staff who prepared for today, and it helped land a lot of players that we had our eyes on in the first place. We look forward to seeing them in downtown Everett.”

With their first selection in the draft coming in the fourth round (81st overall), the Silvertips selected defenseman Hoyt Stanley from the St. George’s School Bantam Prep (CSSBHL) program. The West Vancouver, British Columbia native led the club’s defensemen with 36 points (7g-29a) in 29 games, also adding two goals and an assist in three postseason games.

Six picks afterward the Silvertips selected center Roan Woodward in the fourth round from the North East Woflpack Bantam AA program (SBAAHL). The Nipawin, Saskatchewan native led the program and was fifth in league scoring with 100 points (42g-58a) in 31 games, also ranking tied for second in the league with 58 assists. He added four goals in a pair of playoff games.

DID YOU KNOW: Wyatt Stefan’s father, Patrik, competed in 455 career NHL games with Atlanta and Dallas, and was the first overall selection in the 1999 NHL Entry Draft by the Thrashers … Wyatt’s brother, James, skated in 49 games with the Portland Winterhawks (WHL) this season as a 2003-born winger, his rookie WHL campaign.