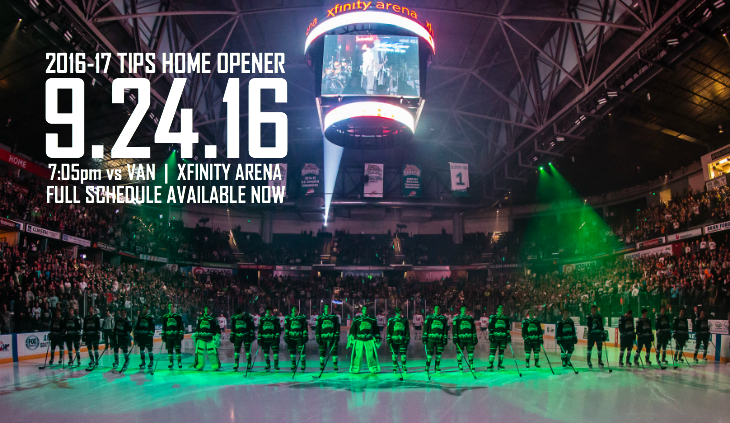 Download a full PDF version of the Silvertips 2016-17 schedule.

EVERETT, Wash. – The Everett Silvertips (@WHLSilvertips) announced today their 2016-17 regular season schedule for their 14th season in Snohomish County. The Silvertips will open the schedule with a “home-and-home” series against the Vancouver Giants, launching Friday, Sept. 23 in Langley, B.C. at 7:30 p.m. followed by the Silvertips home opener against the Giants, Saturday night at 7:05 p.m. at XFINITY Arena.

Priority seating and guaranteed home opener tickets are now available by placing a $50 deposit for Silvertips season ticket or mini-plan packages (available in full season, 22-game or 14-game plans) at www.everettsilvertips.com/season or by calling (425) 252-5100.

All Silvertips home games are at XFINITY Arena, scheduled for the following times:

The Silvertips home opener revives an XFINITY Arena opener between Everett and Vancouver, facing off for the third time (Silvertips are 1-1-0-0) under home schedule opening conditions in downtown Everett. Most recently on Sept. 26th, 2009, Shane Harper’s shootout-winning goal lifted the Silvertips to a 4-3 victory over the Giants in downtown Everett. The Silvertips are 6-5-1-1 in home openers, all-time and defeated the Spokane Chiefs, 5-4 in sudden death overtime last season to open the regular season home schedule at XFINITY Arena.