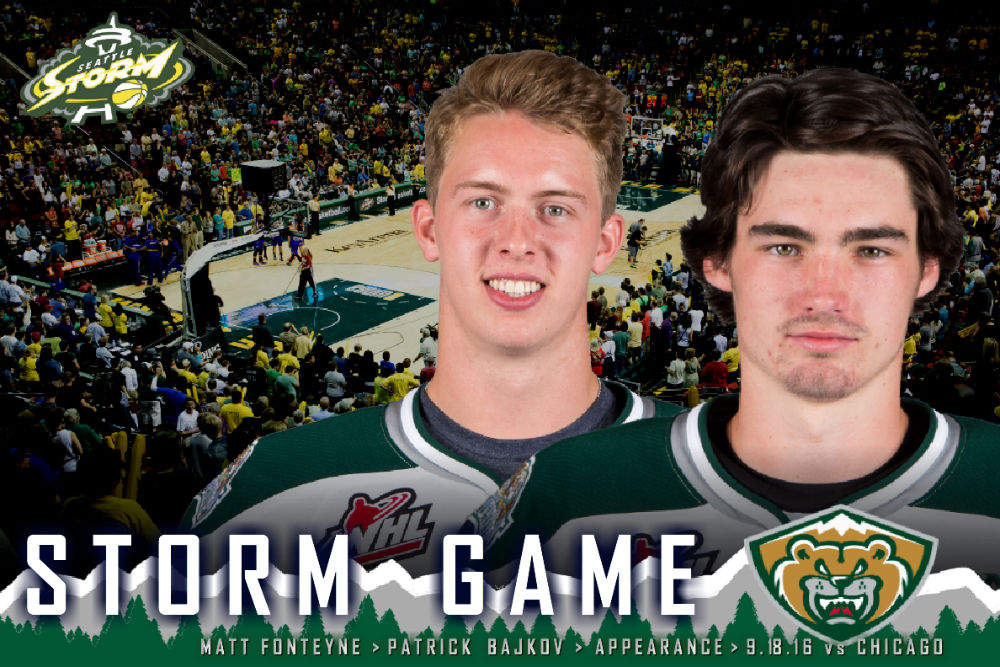 EVERETT, Wash. – Everett Silvertips forwards Matt Fonteyne and Patrick Bajkov are scheduled to appear at Key Arena for a WNBA game between the host Seattle Storm and Chicago Sky on Sunday, September 18, starting at 4:00 p.m.

Fonteyne and Bajkov are scheduled to appear for the Storm’s regular season finale in several in-game and arena activities. The two forwards will participate in an autograph signing for fans in attendance in the Summer Fun Zone inside Key Arena, from 3-4 p.m. and at halftime. The duo will also participate in a creative scavenger hunt, hosted by the Silvertips Twitter account (@WHLSilvertips) with the opportunity for fans in attendance to win prizes such as:

An exclusive group ticket offer is available for parties 10 people or more, offering:

Tickets can be purchased from the link below, using the promo code “SILVERTIPS”, or by contacting Jaron Iwakami by phone at (206) 272-2553 or email: JIwakami@StormBasketball.com.

Fonteyne, 18, is set to begin his fourth season in Everett and the 5-foot-10, 181-pound left winger earned two post-season Silvertips awards for Co-Iron Man and Most Improved Player last season, when he earned career-highs in goals (16), assists (32) and points (48) in 72 games. The Wetaskiwin, Alberta native has played a total of 204 games in the Silvertips uniform, totaling 27 goals and 74 points.

Bajkov, 18, is back in Everett to start his fourth season with the Silvertips and the end of the 2014-15 season was awarded the Iron Man Award. The Nanaimo, British Columbia native hit career-highs last season in points (46) and assists (28) in 71 games. The 6-foot, 181-pound forward has played a total of 199 games as a Silvertip, earning 50 goals and 60 assists.

Fonteyne, Bajkov, and the rest of the Silvertips are back in action for the final preseason home game on Saturday, Sept. 17th at XFINITY Arena with a 7:05 pm face-off against the Seattle Thunderbirds. Tickets are on sale at everettsilvertips.com/preseason.

The Silvertips will open the 2016-17 schedule with a “home-and-home” series against the Vancouver Giants, launching Friday, Sept. 23 in Langley, B.C. at 7:30 p.m. followed by the Silvertips home opener against the Giants, Saturday night at 7:05 p.m. at XFINITY Arena. Single game tickets are now on sale by visiting online, the Tips App, calling (425) 252-5100 or visiting XFINITY Arena in person.