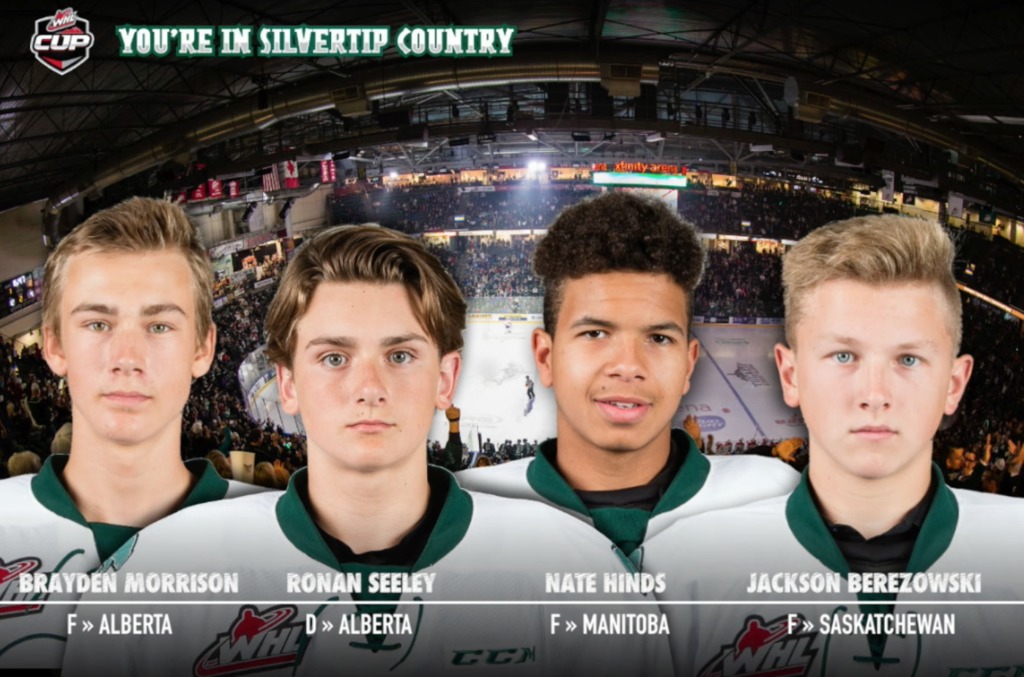 EVERETT, Wash. – The Everett Silvertips (@WHLSilvertips) announced in conjunction with the Western Hockey League today that four Silvertips prospects have been named to under-16 rosters for the 2017 WHL Cup, hosted at the Markin MacPhail Centre in Calgary starting Wednesday, Oct. 18.

The following Silvertips prospects scheduled to participate are:

All four players skated in Everett this preseason during training camp.

The 2002-born defenseman was fourth in the Alberta Major Bantam Hockey League, led the Red Deer Rebels (Bantam AAA) defensemen and was third overall in club scoring with 38 points in 35 games, earning the club’s Most Outstanding Defenseman honors. His 30 assists were third on the program and he put up six points in five postseason games with Red Deer, who went 21-9-6 and finished second in the Ram South division. Seeley was also named the league’s Most Sportsmanlike Player in 2015-16, when he earned 16 points and a pair of power play goals in 36 games for the Rebels. He is currently skating with the Lethbridge Hurricanes Midget AAA program (AMHL), suiting up in two games.

The 2002-born forward was second on the Calgary Flames Bantam AAA (AMBHL) club last season with 34 points in 36 games and was tops in the playoffs with ten points in five games. Morrison has two games of experience with the Calgary Flames Midget AAA program this season and has posted three points (1g-2a). His father, Brendan, competed in 934 career NHL games with New Jersey, Vancouver, Anaheim, Dallas, Washington, Calgary, and Chicago.

The 2002-born forward was ninth in the WBAAA league and led the Winnipeg Warriors last season with 55 points in 32 games. Hinds added five points in five postseason games. Currently, he is skating with the Winnipeg Bruins (MMHL) and has suited up in two games.

The 2002-born forward was signed by the Silvertips to a WHL Standard Player Agreement on Aug. 31, 2017 and took the league scoring title at the Saskatchewan Bantam AA level in 2016-17 with 87 points (41g-46a) in 30 games and was fourth in league goal scoring (41) with the Yorkton Terriers, a 57-point increase he manufactured after helping guide the Terriers to a league title (SBAAHL) the previous season. The native of Yorkton, Saskatchewan had seven hat tricks, 15 multi goal games, and 27 multi point games throughout last season, and this year has five points (2g-3a) in six games with the Yorkton Maulers (SMHL).

Formerly known as the Western Canada U16 Challenge Cup, the event features the highest-rated players in the under-16 age category from the provinces of Alberta, British Columbia, Manitoba and Saskatchewan in partnership with BC Hockey, Hockey Alberta, Saskatchewan Hockey Association, Hockey Manitoba and Hockey Canada.

The tournament, launched in 2009, will be a four-team round-robin format and is the first step in Hockey Canada’s Program of Excellence for players. Team Alberta is a five-time champion of the WHL Cup, hoisting the trophy in 2009, 2011, 2013, 2015 and 2016, while Team British Columbia won the event in 2012. Past participants with NHL experience include Matt Dumba (Minnesota), Brayden Point (Tampa Bay), Griffin Reinhart (Vegas), and Jake Virtanen (Vancouver).