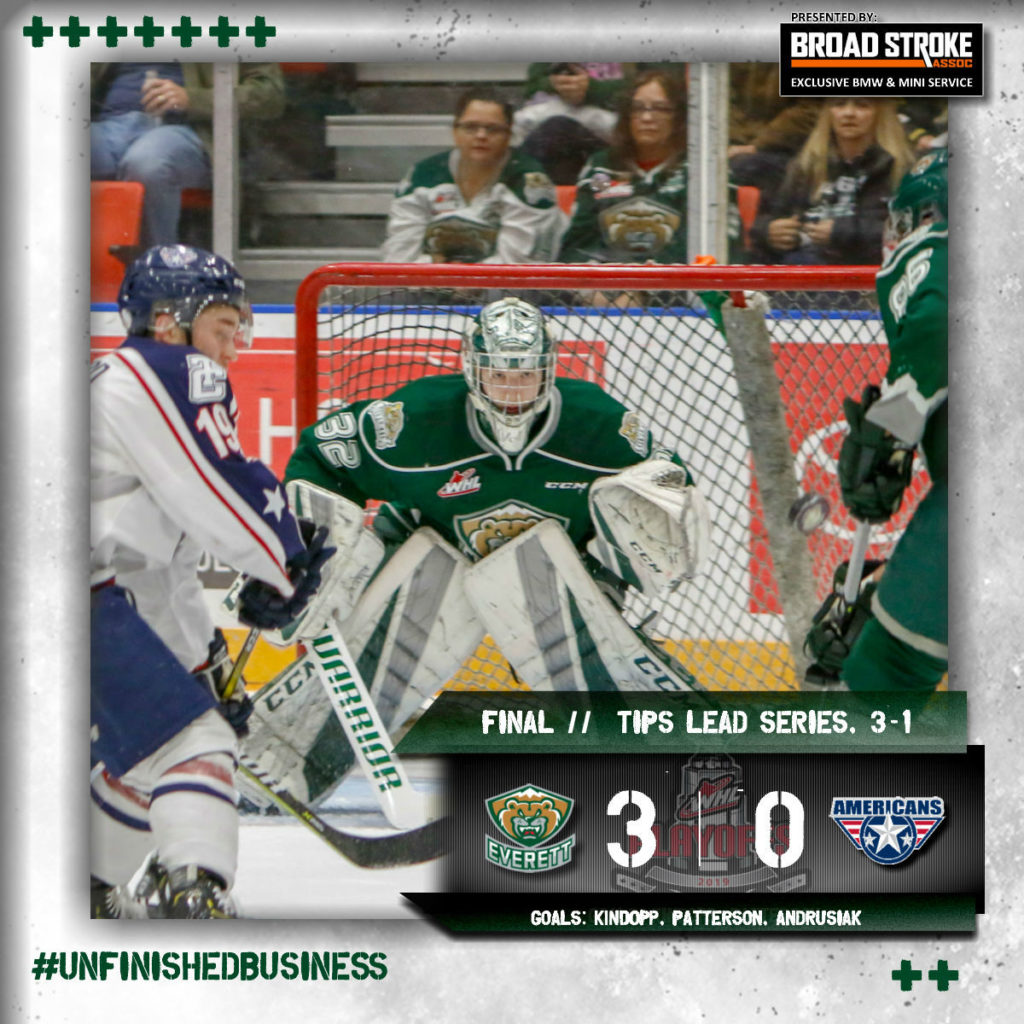 EVERETT, Wash. – Dustin Wolf turned in his first career WHL Playoff shutout on 24 saves and Bryce Kindopp scored the game winner while adding an assist to lift the Everett Silvertips to a 3-0 victory over the Tri-City Americans and a 3-1 series lead before 2,258 fans at Toyota Center on Thursday in WHL Playoff action.

The Silvertips pushed the Americans to the brink of elimination and can close out the series with a win on home ice on Saturday in Game 5. The Silvertips went 1-of-5 on the power play while Max Patterson and Zack Andrusiak each collected their second goals of the series.

UP NEXT: Game 5 is Saturday at 7:05 p.m. (1380 AM / 95.3 FM / TuneIn App / WHL Live), at Angel of the Winds Arena, with doors opening at 6pm and tickets on sale at www.everettsilvertips.com/playoffs and offering a Hat Trick Special (hat, drink voucher, ticket) for just $36, available for purchase at this link.

The Tips got to work on a first period where they outshot Tri-City, 14-5, and claimed the game’s first goal on a two-on-none break. Connor Dewar stripped Aaron Hyman of the puck and drilled a post-to-post feed to Bryce Kindopp, who re-directed it past Beck Warm’s glove for a 1-0 lead at 12:34.

Wolf kept the Tips ahead with a point blank save on Nolan Yaremko before the first period horn. The Tips then took a 2-0 lead on Max Patterson’s second goal of the series, converting a rebound at the right post at 7:56.

Exceptional puck management in the opening eight minutes and the second Silvertips penalty kill kept Tri-City away in the third period, and Zack Andrusiak sealed the game on an empty netter with 41 seconds left.

NOTES: Silvertips scratches included Riley Sutter, Dylan Anderson, Justyn Gurney, Jalen Price and Conrad Mitchell … the Tips moved to 12-17 overall and 8-6 on the road, all-time in Game 4 situations … in the series, the Tips have outshot Tri-City in 10 of 12 regulation periods.