7 Silvertips in NHL Camps This Week 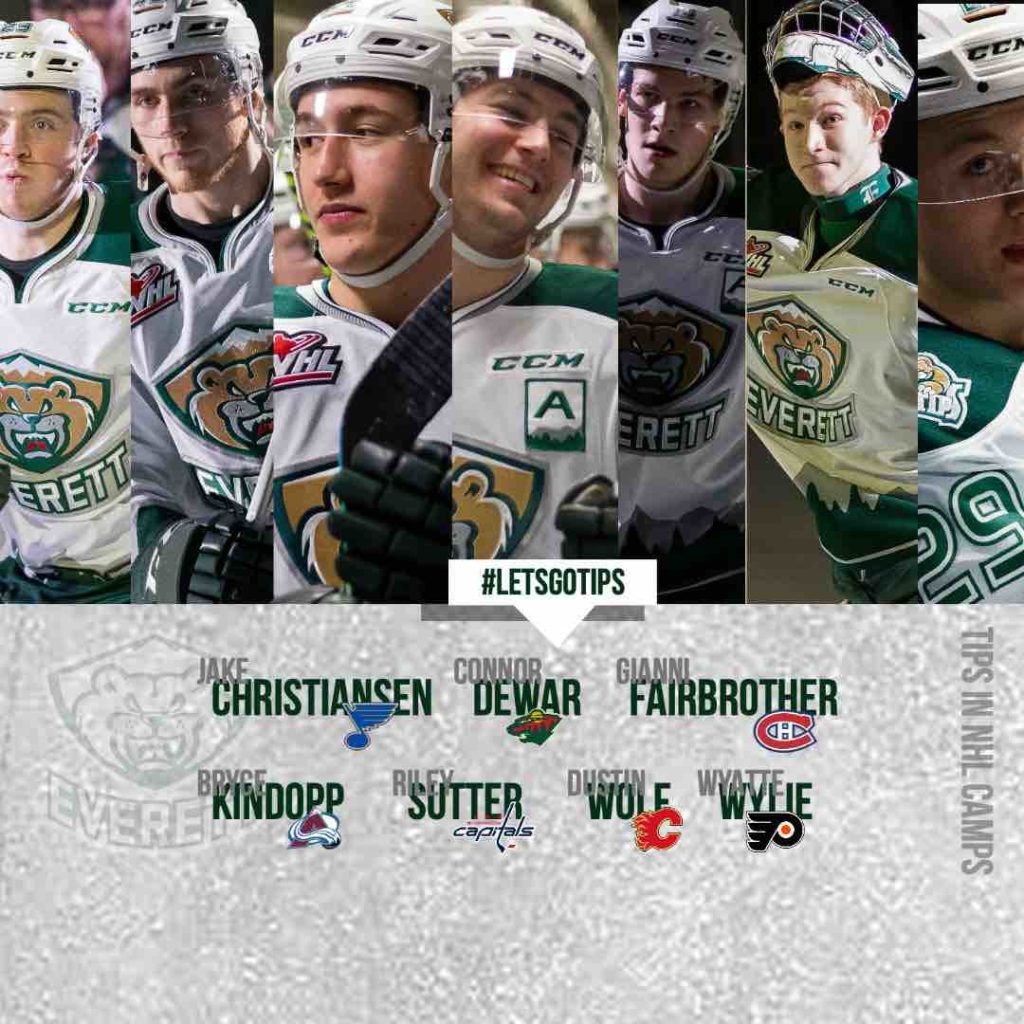 The collection of Silvertips players will skate in camp with the following teams:

Christiansen, who turns 20 on Sept. 12, reached career highs in goals (12), assists (32), and points (44) in 67 games last season, leading all Tips blue liners in goals, power play goals (6), and game winning goals (3). The 6-foot, 190 pound blueliner from West Vancouver, British Columbia earned a career high four points (1g-3a) on Feb. 2 against Seattle, and logged 10 multi point games. On Feb. 9, he earned his first career hat trick against the Portland Winterhawks. He has suited up in 259 career WHL games, all in a Silvertips jersey, logging 102 points, a +55 rating and 79 penalty minutes.

Last season, Christiansen participated in rookie camp with the Calgary Flames (NHL) and returns to St. Louis after skating in the summer with the Blues in 2019 development camp. The Blues will skate in the NHL Prospects Tournament, Sept. 6-10 in Traverse City, Mich. (FOX Sports GO / FOXSportsGO.com / may require subscription login).

Dewar, 20, signed a three-year entry level contract with the Wild on Mar. 5 and last season led the Tips as captain with 81 points and 45 assists in 59 games, additionally ranking second in goals (36), game winning goals (8), and club leader in power play points (29), power play assists (19), and tied for the lead in power play goals (12). He was named Silvertips Most Valuable Player for the 2018-19 and for his career, Dewar is fifth all-time on the Silvertips in goals (99) while totaling 197 points in 270 career regular season games, along with 39 points in 50 postseason games. He was originally selected by the Wild in the third round (92nd overall) of the 2018 NHL Entry Draft. The Wild will skate in the NHL Prospects Tournament, Sept. 6-10 in Traverse City, Mich.

Fairbrother, who turns 19 on Sept. 30, reached career highs in goals (10), assists (26), and points (36) in 64 games with the Silvertips last season, helping the club secure their third straight U.S. Division title while securing four assists in ten postseason games. The 6-foot, 194-pound defenseman was named Silvertips Most Improved Player and has 41 points (12g-29a) along with 113 penalty minutes in 100 career WHL games, all with the Silvertips. He has eight points (1g-7a) and a +11 rating in 35 postseason games. Fairbrother was selected by Montreal in the third round (77th overall) of the 2019 NHL Entry Draft. The Canadiens skate from Sept. 5-10 in rookie camp, in coordination with the 2019 Rookie Showcase in Belleville, Ontario.

Kindopp, 20, led the Silvertips last season with 39 goals and set additional career highs in assists (34) and points (73) in 67 games, named recipient of the team’s Unsung Hero award and co-recipient of the Silvertips Iron Man award. He led the club with a +37 rating, second highest in Silvertips single season history, and was tied for the Tips lead in power play goals (12). In 203 games during his WHL career, all in Everett, he has logged 123 points and 70 goals along with 21 power play goals. Kindopp returns to the Avalanche after skating with them in development camp, shortly after the 2019 NHL Draft, and will compete in the 2019 Anaheim Rookie Faceoff, Sept. 7-10 at Great Park Ice in Irvine, Calif.

Sutter, who turns 20 on Oct. 25, signed a three-year entry level contract with the Capitals on Sept. 29, 2019 and was originally selected by Washington in the third round (93rd overall) of the 2018 NHL Entry Draft. The 6-foot-3, 210-pound center last season served as Silvertips alternate captain and logged 41 points (14g-27a) in 38 games, missing 30 games due to injury. Sutter has 137 points in 204 career WHL games, all with the Silvertips along with 21 points in 32 postseason games. The Capitals will skate from Sept. 7-10 in the 2019 Prospects Showcase at Ford Ice Center in Antioch, Tenn. (video: WashingtonCaps.com and audio: Caps Radio 24/7).

Wolf, 18, was selected by the Calgary Flames in the seventh round (214th overall) of the 2019 National Hockey League Entry Draft after earning WHL Western Conference Goaltender of the Year, CHL Scholastic Player of the Year, Silvertips Most Dedicated Player, Community Relations, and Scholastic Player of the Year awards this past season. The 5-foot-11, 160-pound goaltender in 2018-19 broke the Silvertips record and led the WHL in wins (41), also leading the league in save percentage (.936), goals-against-average (1.69), and minutes (3,615). The Tustin, Calif. native was also second in shutouts (7), and fourth in saves (1,493), posting the second highest save percentage in the franchise’s single season history, the second lowest goals-against-average in franchise history – and fourth lowest in WHL history.

He was named WHL Western Conference first team All-Star this season, also suited up for Team USA this summer at the World Junior Summer Showcase. Following fitness testing, the Flames will hold practices and morning skates at Winsport – Canadian Olympic Park, battle Edmonton Oilers rookies at Emma Centrium in Red Deer on Sept. 7, and face a re-match with the Oilers on Sept. 10 at Scotiabank Saddledome (video: CalgaryFlames.com / Twitter / Flames Twitter, Facebook and YouTube).

Wylie, who turns 20 on Nov. 2, last season hit career highs and led Silvertips defensemen in points (47), assists (36), plus-minus (+33), and tied the Silvertips lead for power play assists (18). The native of Everett, Wash. has 88 points and a +42 rating in 210 WHL games, all in a Silvertips jersey, along with 13 points in 43 career postseason games. Wylie was originally selected by the Flyers in the fifth round (127th overall) of the 2018 NHL Entry Draft. The Flyers open Sept. 7 at The Virtua Center Flyers Skate Zone in Voorhees, N.J. and battle against the New York Islanders on Sept. 11 in a rookie game at PPL Center (Allentown, Penn.). Broadcast coverage will be announced soon.