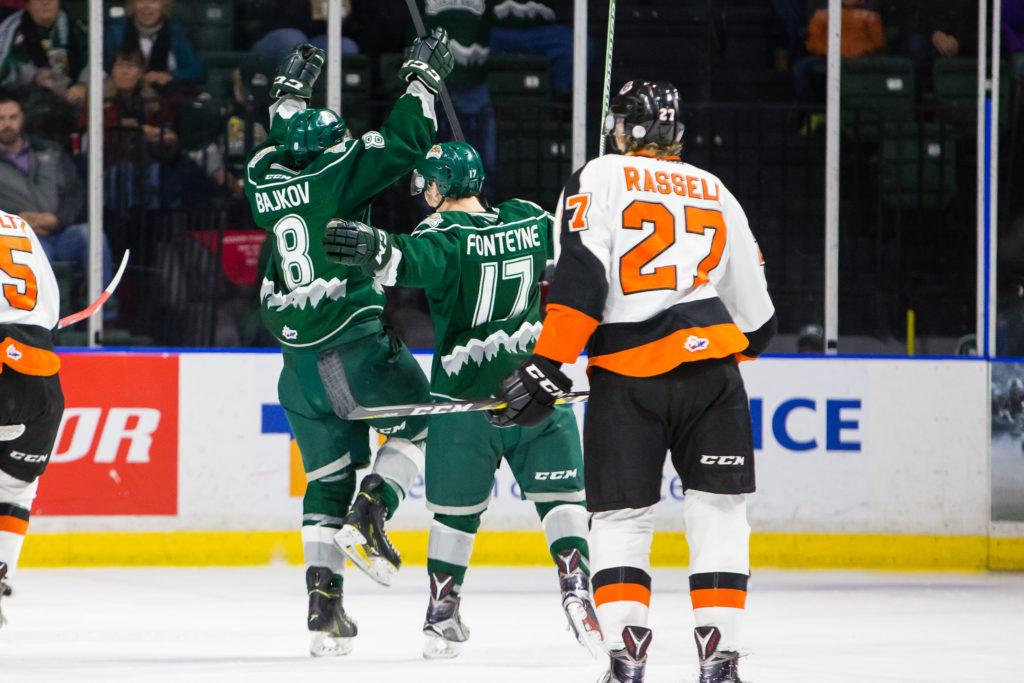 The Everett Silvertips are now number one in the U.S. Division, the Western Conference and the entire Western Hockey League. Everett is riding a five game win streak, are 12-1-3 in the last 16 games and have outscored their opponent 54-31.

A lot of things have been clicking with the Silvertips this season, especially as of late. Dominic Zwerger has 14 points in his last 13 games. Goaltender Carter Hart is 10-1-2 in his last 13 games and just ended a 193:48 shutout streak. With Patrick Bajkov’s four point night against Medicine Hat, he now has 35 points in 27 games and is Everett’s point leader.

Confirmed thru the magic of postgame research: @patrickbajkov set a new Tips franchise record for fastest 2 goals (one player): 15 seconds.

The team has seen a lot of production from their usual suspects, but have also seen a lot of great stuff from their newcomers and the playmakers. “Everyone is buying in and everyone is doing a great job,” said Noah Juulsen, in regards to the confidence level of the group. It seems that the atmosphere of the locker room is that the boys are excited about riding this wave but are doing their best to stay grounded and focused on the next play, shift, and game.

Fonteyne commented that the Tips need to continue to, “stick to their game and not let up.”

It’s important to be excited by different milestones that individual players and the team itself are achieving, but the ability to move past and keep rolling is equally as important, and the Tips have shown that they can do that.

“We’re a pretty confident group, but at the same time, a couple pats on the back can be dangerous for our team so yeah, we just need to keep pushing, keep working, and we’ll be alright,” said Patrick Bajkov.

Coach Kevin Constantine commented on the ability that this group has to stay mentality tough, even in situations where the game seems to be unsettled and there is continuous pressure from the opposition. If the Tips are able to keep from being rattled and keep their composure mixed with their dangerous offense and tight defense, they can stay in contention for top of the league status.

This story was not subject to the approval of the WHL or its clubs.