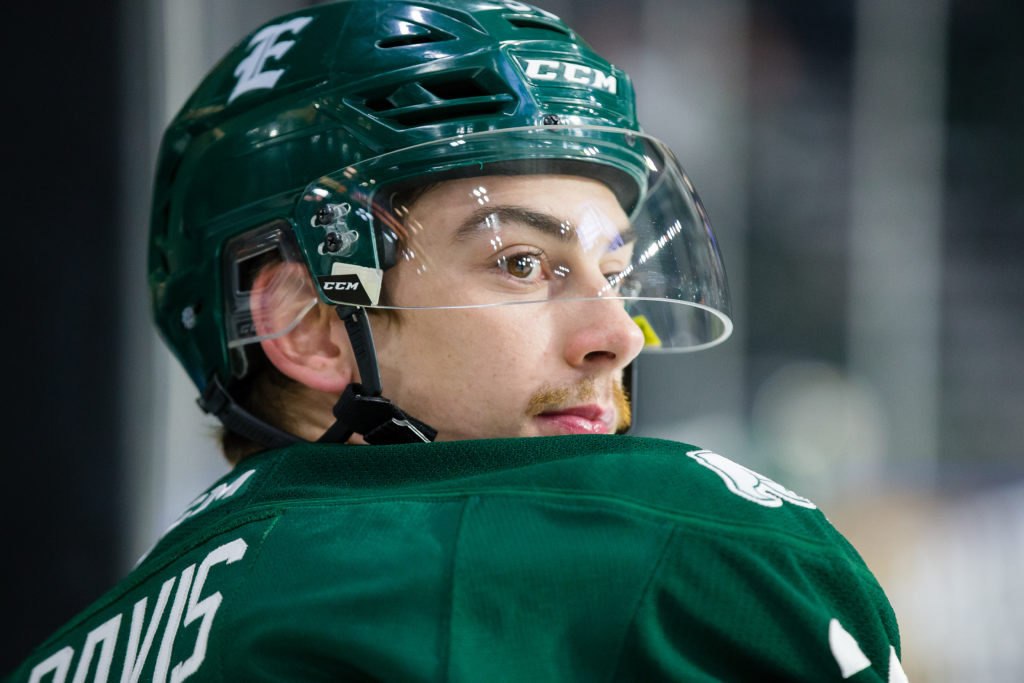 Kevin Davis misses coming home to a home cooked meal. Living on his own is a big change from five years spent billeting in Everett, and having to prepare his own food is the biggest difference, for him, about making the jump from the WHL to pro hockey.

Davis is spending his first pro season splitting time between the ECHL’s Utah Grizzlies and the Colorado Eagles in the AHL after attending Colorado Avalanche camp this September. Only a few months out of junior hockey, there’s still WHL connections everywhere for Davis.

In the ECHL, he was roommates with a familiar face from the other side of the ice, former Seattle Thunderbird Turner Ottenbreit. While Ottenbreit was sometimes infuriating to play against when Davis was a Silvertip, his physical style of play is newly appreciated now that they’re on the same side.

“We’ve obviously discussed about our little rivalry back in junior, but he’s honestly a great guy and I really liked playing with him,” Davis said. “You know what type of player he is, you know he’s always ready to go to war, so it’s always fun to play with him.”

Davis was called up to the AHL and played his first game with the Eagles on Dec. 1. A little under amonth later, the Eagles were scheduled to play the San Jose Barracuda, where Davis’ five year Silvertips teammate Matt Fonteyne is on the roster. Fonteyne didn’t play in that game, but Davis had seen him just a few days earlier.

There are Silvertips and WHL alumni throughout the AHL and ECHL, and even when Davis faces a pro team for the first time, some of the players are familiar.

“It’s always nice to try and catch up with our guys when you run into them at the hockey rink and stuff. Hockey’s a small world.”

Davis – whose OT winner to clinch last year’s Western Conference title is now perhaps the biggest goal in Tips history – is still keeping in contact with his former teammates who are still playing junior hockey as well. After going all the way to the WHL final, the team has stayed tight knit despite some players going pro and others leaving in trades.

While Davis’ five years in Everett are now up, it became his second home in the time he spent there.

“I miss the fans, I miss my billets, I miss having a meal cooked every day that I didn’t have to prepare,” Davis said. “I miss a lot of things about Everett. It’s always going to be a special place in my heart.”