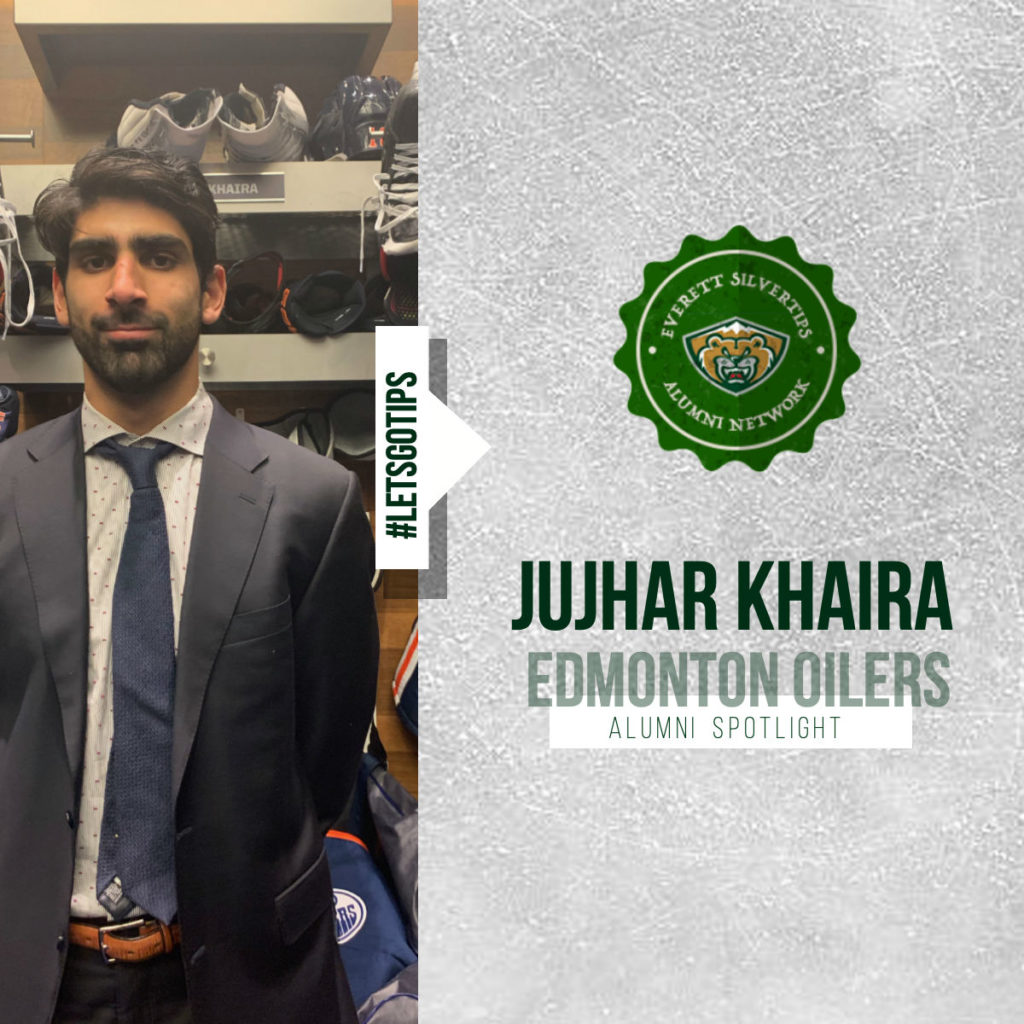 While preparing for an away matchup with the Edmonton Oil Kings, the Silvertips got a chance to watch a New Year’s Eve showdown between the National Hockey League’s Edmonton Oilers and the New York Rangers. Silvertips players and staff welcomed in the new decade by attending an exciting, high scoring game that ended with the Oilers taking a 7-5 victory after stopping a late comeback attempt by the Rangers.

One of the standouts for the Oilers that night was Silvertips alumni Jujhar Khaira. The forward recorded two assists, including a critical one to teammate Kailer Yamamoto – and fellow WHL alumnus – who found the open net late in the 3rd period. This late goal essentially ended New York’s wild comeback attempt.

He could have earned a three point night – Khaira was stopped at the left goal post in the first two minutes of the first period on a lunging toe save by Rangers goaltender Alexandar Georgiev.

After being drafted 63rd overall in the 2012 NHL draft by the Edmonton Oilers. Khaira spent the 2013-14 season with the Silvertips, playing 59 games while recording 43 points off of 16 goals and 27 assists. Following his season with Everett, Khaira signed a three year deal with the Oilers, making his NHL debut in 2015. Since his debut, Khaira has been steadily working towards building NHL minutes and is approaching 200 career games in “The Show.”

“A big thing for me is consistency.” Khaira said after the game. “I want to be a guy that brings something to the table every night.”

Speaking about his time spent in the Western Hockey League and Everett for his previous coaches, he said, “I Think [being in Everett] really helped my defensive game and I think that’s a big part of my game now. Playing there was great, great for the confidence and getting used to the busy schedule.”

When asked about Khaira, Garry Davidson, Silvertips General Manager, had kind words for the player.

“He’s a quality young man.” Davidson said. “He comes from a really supportive family, and he fit right in (with the Silvertips).”

Davidson, who also got a chance to watch Khaira’s performance against the Rangers, said that he “Had a good game that night.”

Former teammate and Silvertip alumni Matt Fonteyne also had kind words for Khaira, saying that he was “someone to look up to on and off the ice.” Fonteyne explained that both he and Khaira joined the Silvertips the same year, and that playing alongside Khaira helped Matt improve his own game as a young player.

“He is obviously a great player.” Fonteyne said, adding a part on humility.

Fonteyne spent five seasons with the Silvertips from 2013 to 2017, and is currently playing Hockey for the University of Alberta.

About halfway through their regular season, the Edmonton Oilers currently sit in a Wild Card spot and are only two points off of first place in the Pacific Division.

However, strong performances like the one from Khaira and others might prove to be critical as Edmonton find themselves in the middle of a five game stretch away from home ice.

As he sits near a string of familiar faces in the Oilers dressing room – including Ethan Bear (Seattle), Ryan Nugent-Hopkins (Red Deer), and Caleb Jones (Portland), they all share one thing in common.

The career ladder started in the WHL, now continuing to strike for oil.