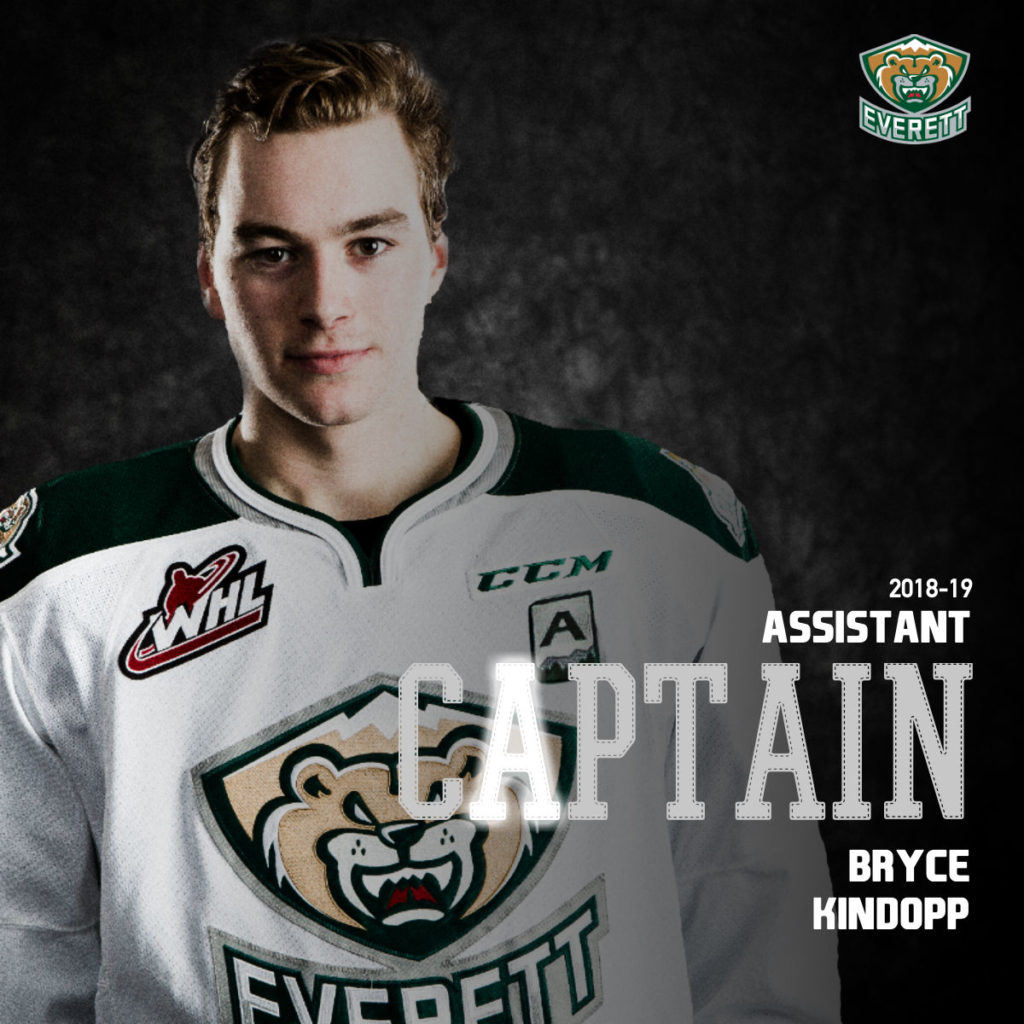 EVERETT, Wash. – The Everett Silvertips (@WHLSilvertips), defending Western Conference champion and six-time U.S. Division champion of the Western Hockey League, have named forward Bryce Kindopp as assistant captain, who will wear the letter “A” on his Silvertips jersey for the remainder of the 2018-19 season.

“Bryce has developed into a big contributor and has rightfully gained the reputation as a respected and dedicated player who represents the core values of our hockey club,” said Silvertips head coach Dennis Williams. “He has earned the letter he will wear on his jersey. His attention to detail and attitude have a positive impact for our entire group, extremely valuable qualities as we get closer to the stretch drive of the season.”

Kindopp, 19, has already surpassed his career high in points (37) in 38 games this season and is third on the Silvertips with 18 goals, six shy of his career-high. The Lloydminster, Alberta native is also +15 this season with a club leading three shorthanded goals, is second with four game winning goals, and is tied for fourth with five power play goals.

The 6-foot-1, 185-pound forward hasn’t missed a game since the 2016-17 season and last year earned 24 goals and 36 points in 72 games, additionally racking two goals and three assists in 22 playoff games as the Silvertips won their sixth U.S. Division title, their second Western Conference title and advanced to the WHL Championship Series for the first time since the 2003-04 season.

The Silvertips have 60 points with a record of 29-7-1-1, leading the Western Conference and ranking second in the WHL for most points.

The Silvertips next face the Tri-City Americans on Friday, a 7:05 p.m. (KRKO / Tips App / WHL Live) road game at Toyota Center and return home this Saturday against the Americans at 7:05 p.m. in downtown Everett. Tickets for Saturday’s game, along with a 4:05 p.m. Sunday home game against the Kamloops Blazers are available at http://www.everettsilvertips.com/tickets.