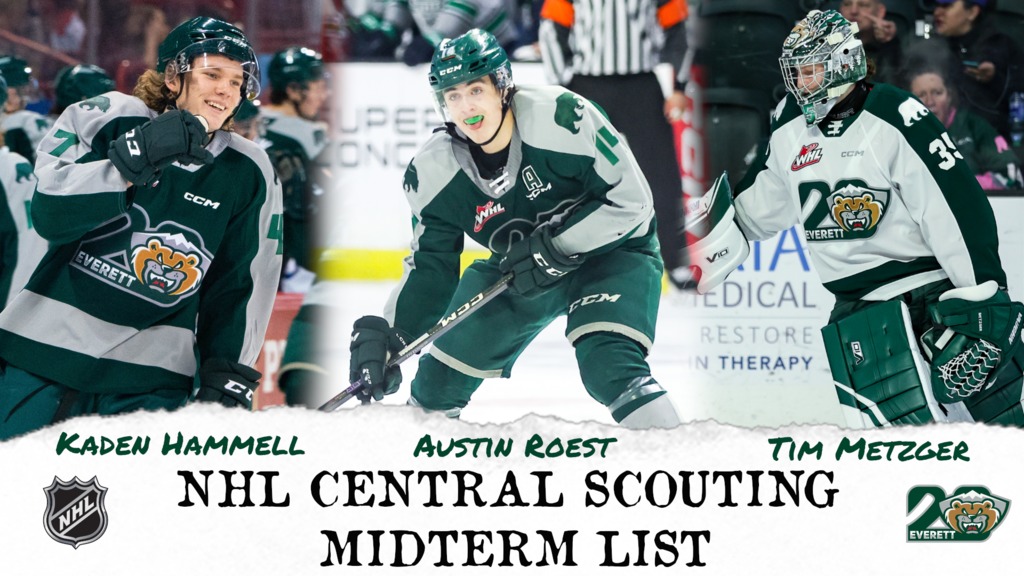 Roest, an ’04-born center, is ranked 83rd amongst North American skaters. He currently sits tied for fifth in the Western Hockey League in points with 52 in 38 games played, with his 23 goals tied for sixth in the league. He also leads the Silvertips in assists with 29, with 11 of them coming on the powerplay.

Hammell, an ’05-born defender, sits 95th amongst North American skaters. Recently acquired via trade from the Kamloops Blazers, he scored a goal with two assists in his Silvertips debut on Jan. 11 in Spokane, giving him six goals and seven assists on the season in 37 games played. He currenlty holds a +19 defensive rating, the best such rating on the Silvertips and tied for 10th amongst all WHL defensemen.

Metzger, an ’05-born Zurich, SUI native, is ranked 20th amongst North American goaltenders. He has made four starts in his WHL rookie season with a 3-1 record in those appearances, an .872 save percentage and a 3.00 goals-against average.

Overall, 20 of 22 WHL Clubs are represented in the Mid-Term Rankings. The Seattle Thunderbirds and Vancouver Giants each boast five players on the lists, while the Brandon Wheat Kings, Everett Silvertips, Kelowna Rockets, Lethbridge Hurricanes, Portland Winterhawks, Red Deer Rebels and Tri-City Americans each have three players on the Mid-Term Rankings. Nine WHL Clubs are represented with two players on the lists, while two further WHL Clubs have a single player on NHL Central Scouting’s lists.

A total of 26 WHL forwards find themselves on the Mid-Term Rankings, joined by 16 WHL defencemen, and nine WHL goaltenders.