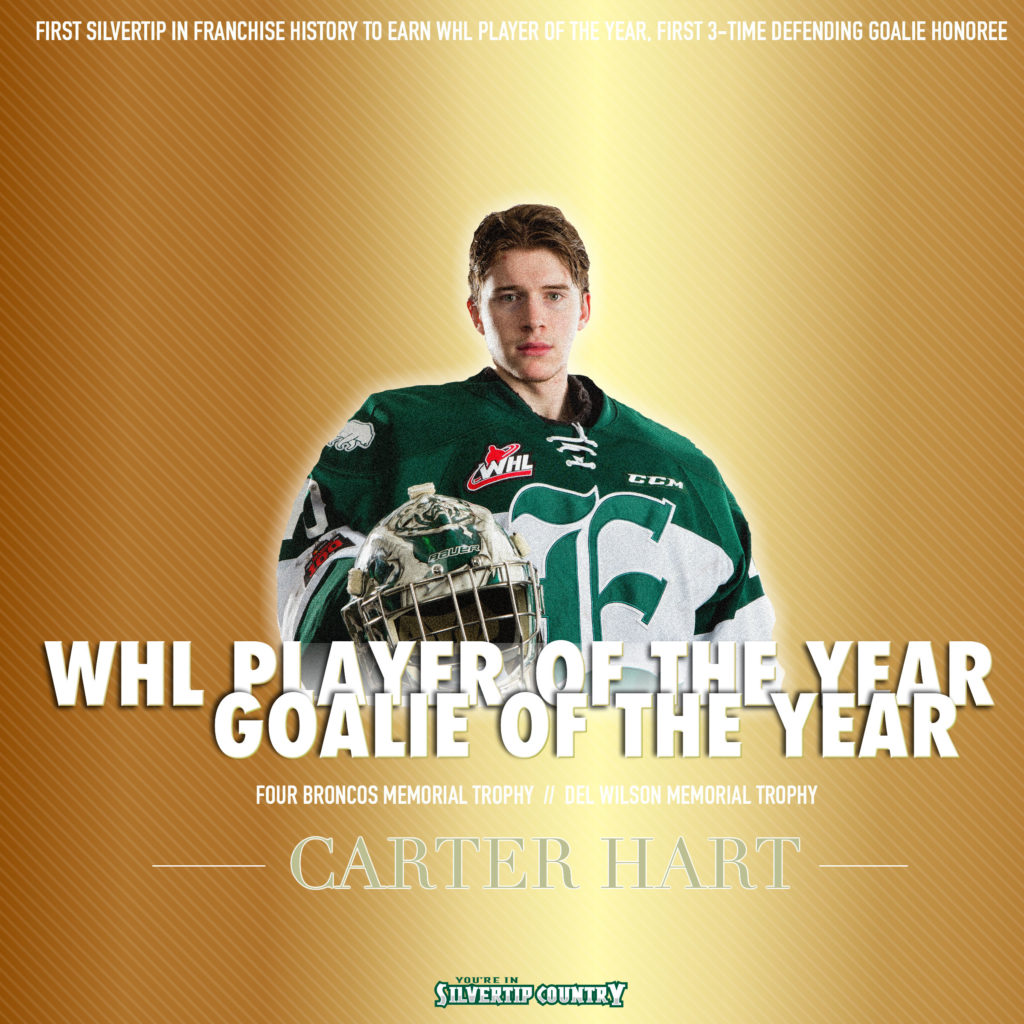 EVERETT, Wash. – The Everett Silvertips (@WHLSilvertips), two time Western Conference champions of the Western Hockey League, announced today in conjunction with the WHL that goaltender Carter Hart has been named third consecutive recipient of the Del Wilson Trophy as the league’s top goaltender, and recipient of the Four Broncos Trophy as the WHL’s most valuable player.

“On behalf of the Silvertips organization, I congratulate Carter Hart on becoming the first Silvertip recipient of the Four Broncos Memorial Trophy and the first goaltender in WHL history to be awarded a third consecutive Del Wilson Trophy,” said Silvertips general manager Garry Davidson. “His quality and consistency of play is the contributing factor in being a three-time winner of the Del Wilson Trophy. It’s also the reason he’s been drafted into the NHL and he has a bright future ahead of him.”

“Carter’s work ethic and natural ability have opened the door for these well-deserved honors,” said Silvertips head coach Dennis Williams. “We are extremely proud of the results he has produced, and the dedication he demonstrates every day. He approaches every day like a pro.”

Named First Team All-Star and vying for his second CHL Goaltender of the Year award, he is a three-time recipient of the Silvertips Most Valuable Player award and carries a lifetime record of 116-46-10-2 with a .927 save percentage, 2.01 goals-against-average and 26 career shutouts in 190 games, all with the Silvertips. He is the franchise goaltending leader in wins (116) and is tied for the WHL all-time lead in shutouts (26).

The 6-foot-2, 185 pound goaltender led the league this season in goals against average (1.60), save percentage (.947), shutouts (7), and was fourth in wins (31) while compiling a record of 31-6-1-3 in 41 games. He helped Canada capture the gold medal at this season’s World Junior Championship tournament and is a second round selection (48th overall) of the Philadelphia Flyers in the 2016 National Hockey League Entry Draft. He had a 13-game winning streak this season, surrounding his gold medal accomplishment in Buffalo and was named to three straight WHL Goaltender of the Month honors.

“It’s a privilege to receive the Four Broncos Memorial Trophy and Del Wilson Memorial Trophy,” said Hart. “It’s even more special considering the group we have in our room is still playing in the postseason. Many thanks go to people who have helped make this day possible, including my parents, my billet Parker Fowlds, head coach Dennis Williams, assistant coach Mitch Love, goaltending coach Shane Clifford, and my teammates.”

Hart is the first goaltender since Darcy Kuemper (Red Deer) to earn WHL Player of the Year honors as recipient of the Four Broncos Memorial Trophy.

Now just four wins away from reaching the 2018 Mastercard Memorial Cup, the Silvertips will take to the ice in Game One of the 2018 Rogers WHL Championship Series Friday, May 4 (6:00 p.m. PT) in Swift Current, Sask. against the Swift Current Broncos. The series will come to downtown Everett starting on Tuesday, May 8 for Game 3 at Angel of the Winds Arena, starting at 7:05 p.m.

Season Membership deposits for the Silvertips 2018-19 season are being accepted for $50 at www.everettsilvertips.com/ticketcentral or by calling (425) 252-5100.