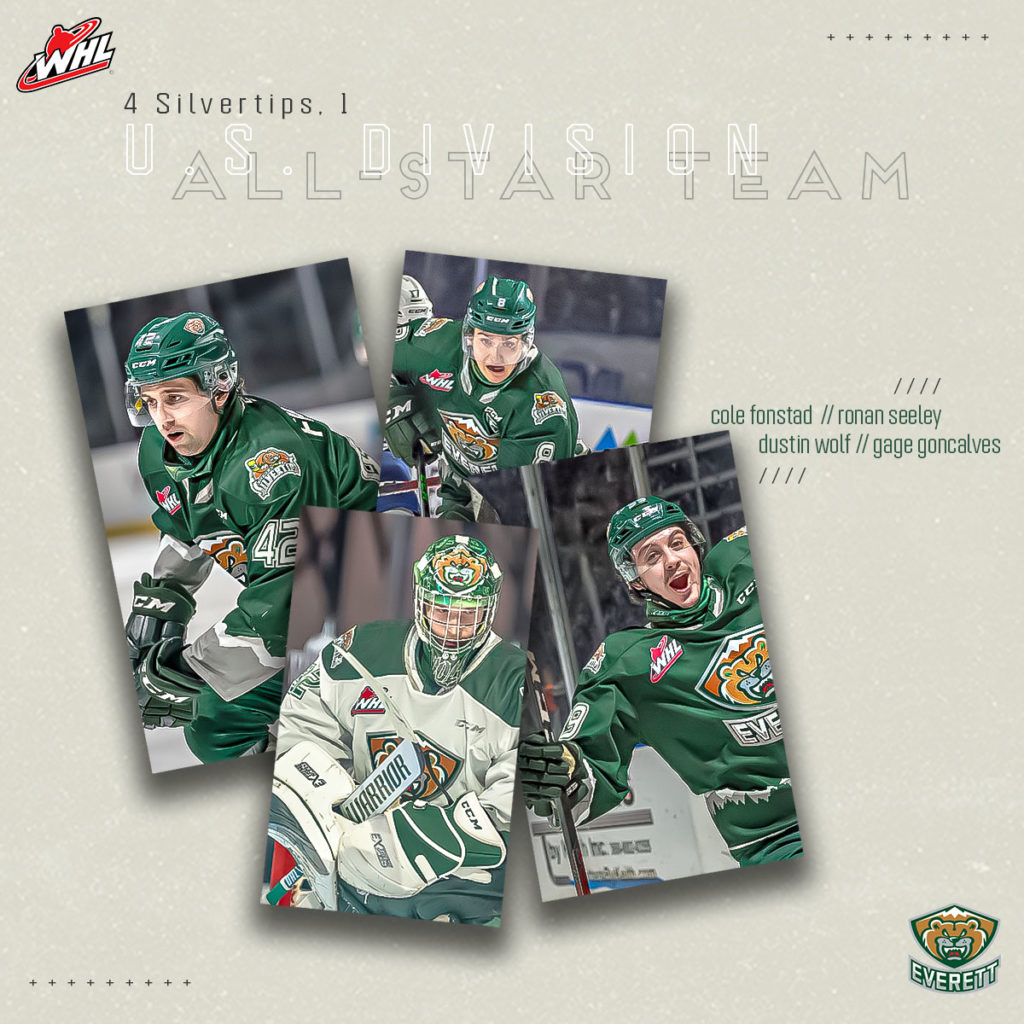 EVERETT, Wash. – The Everett Silvertips, eight-time U.S. Division champions and two-time Western Conference champions of the Western Hockey League, announced today in conjunction with the WHL that four Silvertips have been named to the 2021 WHL U.S. Division All-Star Team:

DUSTIN WOLF (Goaltender) – The Gilroy, Calif. native finished 18-3-0-0 in 22 games with a 1.80 goals-against average, .940 save percentage, and four shutouts as the Silvertips claimed their fourth U.S. Division title in five seasons. The 6-foot-0, 168-pound goaltender led the league in wins, finished tied for first in shutouts, and was second in goals against average and save percentage.

Wolf set a new Silvertips record for longest shutout streak at 216:27 and began the season with three consecutive shutouts and allowed only one goal or less in ten appearances. He was twice named WHL Goaltender of the Week and ended the U.S. Division championship campaign with wins in his final four games, earning a .934 save percentage with 100 saves on 107 shots.

Wolf, 20, was selected in the seventh round by the Calgary Flames in the 2019 National Hockey League Entry Draft and is 106-34-4-2 in 149 games for his career, all in a Silvertips jersey. His 24 career shutouts are second all-time in franchise history and third in WHL history, trailing Tyson Sexsmith (Vancouver) and former teammate Carter Hart with 26. Before this season, he earned a gold medal with USA Hockey at the 2021 World Junior championships, was 2-1-0-0 in his pro debut with the Stockton Heat (AHL), and last season was named WHL and CHL Goaltender of the Year.

RONAN SEELEY (Defenseman) – Seeley earned a career-high five goals with 17 points in 23 games during the pandemic shortened schedule while leading led all U.S. Division skaters, and finishing tied for fifth in the WHL with a +18 rating.

Seeley, 18, was selected in the seventh round by the Carolina Hurricanes in the 2020 NHL Entry Draft and earned four multi point games during the season and finished the season with nine points in eight games.

For his three-year WHL career, the Olds, Alberta native has 58 points (9G-49A) in 138 WHL regular season games, all with the Silvertips, and has been a part of two U.S. Division championship teams in three seasons.

COLE FONSTAD (Forward) – Fonstad, 21, earned 34 points (16g-18a) with three game winning goals (including both overtime winners), nine power play points and tied the Tips lead with seven power play assists in 23 games to finish as the Silvertips co-leader in points with Goncalves and tied for the U.S. Division scoring lead, and tied for third overall in the WHL scoring race.

A total of 13 of his 16 goals scored this season were at even strength situations, and he delivered nine multi point games this season. He was only held scoreless in two games the entire season and earned a season high four points (1g-3a) in a 6-4 win on home ice over Portland on Apr. 6.

The 5-foot-10, 183-pound forward completed his time in the WHL with 281 points (92g-189a) in 293 career regular season games with the Silvertips and Prince Albert Raiders and earned an assist in his pro debut with the Cleveland Monsters (AHL) following the conclusion of the WHL regular season, when he signed an amateur tryout offer (ATO).

GAGE GONCALVES (Center) – Goncalves, 20, tied Fonstad for the Silvertips lead and U.S. Division lead in scoring with 34 points (12g-22a) in 23 games, finishing in a third-place tie in the WHL scoring race while tying the program lead in power play assists (7), leading the program in power play points (10), and tying for second in game winning goals (2).

The 6-foot-1, 184-pound product of Mission, British Columbia enjoyed a pair of four-point games this season, one of which included his first career hat trick in a win against Tri-City on Mar. 28. He collected ten multi point games and twice posted a season high four-point effort, on the Mar. 28 win and on Apr. 16 against Seattle. He earned 15 points in his final ten games of the season.

Goncalves was selected by the Tampa Bay Lightning in the second round of the 2020 NHL Entry Draft , earned an assist in his first two pro games with the Syracuse Crunch (AHL), and has compiled 120 points (46G-74A) in 151 WHL regular season games – all with the Silvertips as a member of two U.S. Division championship teams.

A total of 20 players have suited up in an Everett Silvertips jersey and advanced to play in the National Hockey League, since the Silvertips joined the WHL in 2003-04. Entering this season, the Silvertips have elevated 27 players to be selected by teams in the NHL Entry Draft, including eight over the previous three seasons. The Seattle Kraken, an expansion franchise scheduled to play 30 miles away from Everett at Climate Pledge Arena, will make their NHL debut in the 2021-22 season.