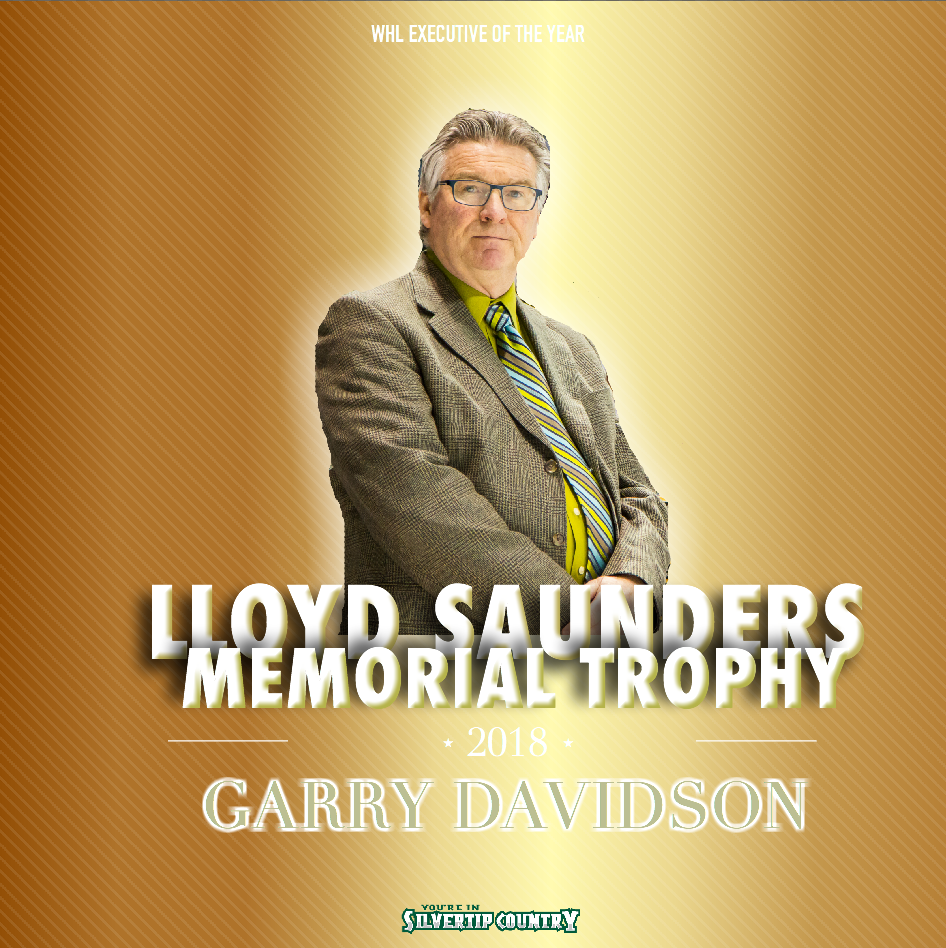 EVERETT, Wash. – The Everett Silvertips (@WHLSilvertips), Western Conference and U.S. Division champions, announced in conjunction with the Western Hockey League that Silvertips general manager Garry Davidson has been named WHL Executive of the Year and recipient of the Lloyd Saunders Memorial Trophy.

Davidson is in his sixth full season as general manager of the Silvertips, named to the position in February 2012. Since taking over the franchise, Davidson has led the Tips with a constructed roster that has evolved into five consecutive winning seasons, including the team’s second Western Conference championship and trip to the WHL Championship Series, and the sixth U.S. Division title this season adding to a record of 211-105-26-18 under Davidson’s tenure in the last five regular seasons.

“On behalf of the Everett Silvertips organization and Consolidated Sports Holdings, I am pleased to congratulate Garry Davidson for receiving the Lloyd Saunders Memorial Trophy as WHL Executive of the Year,” said Consolidated Sports Holdings chief operating officer Zoran Rajcic. “His tireless efforts to build our program into what it’s become has led us to an exciting collection of talented players, a committed coaching and hockey staff, tremendous scouting personnel, and a consistent winning culture. This award is well deserved for Garry and reflects the respect he holds around the game.”

Under his watch, four Silvertips have been selected in the first or second round of the NHL Entry Draft and last summer, seven Silvertips were selected to participate with NHL teams in development camps. Forward Patrick Bajkov, originally selected by the Silvertips in the 2012 WHL Draft, was signed by the Panthers toward the conclusion of the 2017-18 regular season.

This season, with head coach Dennis Williams named WHL Western Conference Coach of the Year, he is serving in his first campaign behind the Silvertips bench as head coach, and the Tips earned their  second largest total in wins (47) and third most points (99) in franchise history. The Silvertips went 37-8-1-2 since Nov. 19, seizing the division title while accumulating seven 20-goal scorers, most for one season in Tips history. The Silvertips also scored 246 goals to set a new single season franchise record, were second in the league for goal differential (+79), and earned eight goals or more in a game on five separate occasions. They advanced to the WHL Championship Series by defeating the Seattle Thunderbirds in the first round, the Portland Winterhawks in the second round, and the Tri-City Americans in the Western Conference Championship Series.

Now just four wins away from reaching the 2018 Mastercard Memorial Cup, the Silvertips will take to the ice in Game One of the 2018 Rogers WHL Championship Series Friday, May 4 (6:00 p.m. PT) in Swift Current, Sask. against the Swift Current Broncos. The series will come to downtown Everett starting on Tuesday, May 8 for Game 3 at Angel of the Winds Arena, starting at 7:05 p.m.