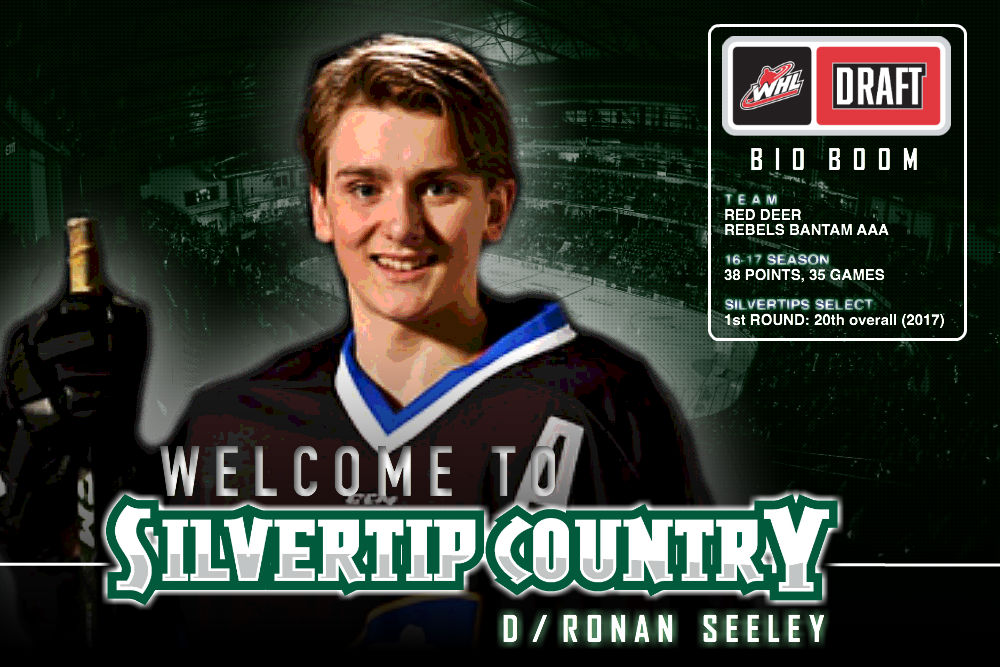 Seeley, a 2002-born blueliner, was fourth in the Alberta Major Bantam Hockey League, led the Red Deer Rebels (Bantam AAA) defensemen and was third overall in club scoring with 38 points in 35 games, earning the club’s Most Outstanding Defenseman honors.

“Ronan is an individual we see who excels in every situation on the ice,” said Silvertips director of player personnel Bil La Forge. “His skating ability is impressive, he can distribute the puck effectively, and is armed with a hard enough shot to be a difference maker in generating offense. It’s difficult to admire his progress and growth potential, and not be reminded of Kevin Davis. We’re very excited and confident about his potential, and welcome him to the Silvertip family.”

His 30 assists were third on the program and he put up six points in five postseason games with Red Deer, who went 21-9-6 and finished second in the Ram South division. Seeley was also named the league’s Most Sportsmanlike Player in 2015-16, when he earned 16 points and a pair of power play goals in 36 games for the Rebels.

Seeley skated for Team Central at this year’s Alberta Cup tournament and posted a pair of assists in five games.

“It’s a really exciting day to be drafted by a great organization in the Everett Silvertips,” said Seeley. “I’m super pumped. Credit goes to my Mom, Dad, four siblings, and all of my hockey buddies in my hometown of Olds, Alberta. I take pride in working at consistency in my production, having a high hockey IQ – especially in my own zone – and using deceptiveness. Everett has great fans and it makes me look forward to seeing them and the beautiful area very soon.”

Ronan’s father, Patrick, skated over the course of two seasons in the WHL with the New Westminster Bruins and Spokane Chiefs (1983-86), registering 15 points in 51 career games.

In total, the Silvertips made 13 selections over the course of 12 rounds of the 2017 WHL Bantam Draft. Complete Silvertips draft history is available at www.everettsilvertips.com/bantam.

Silvertips Season Tickets are on sale now and can be reserved by placing a deposit for $50 through everettsilvertips.com/selectaseat, or call 425-252-5100. “Select-A-Seat” is this Saturday from 10:00am-4:30pm at XFINITY Arena, offering new and current (seat changing) season ticket members a first glance at their seats. Autographs, behind-the-scenes dressing room tours, food, and beverages will be provided.

With the 20th Overall selection in the 2017 #WHLBantamDraft, the @WHLSilvertips select Ronan Seeley (D) from the Red Deer Rebels Bantam AAA pic.twitter.com/LhOsByYoYg