ATTENTION SEASON TICKET & PACKAGE HOLDERS: THE REST OF YOUR TICKETS WILL BE READY FOR PICK UP IN THE SILVERTIPS OFFICE STARTING ON FRIDAY, NOVEMBER 5 - CLICK FOR MORE DETAILS
September 16, 2021 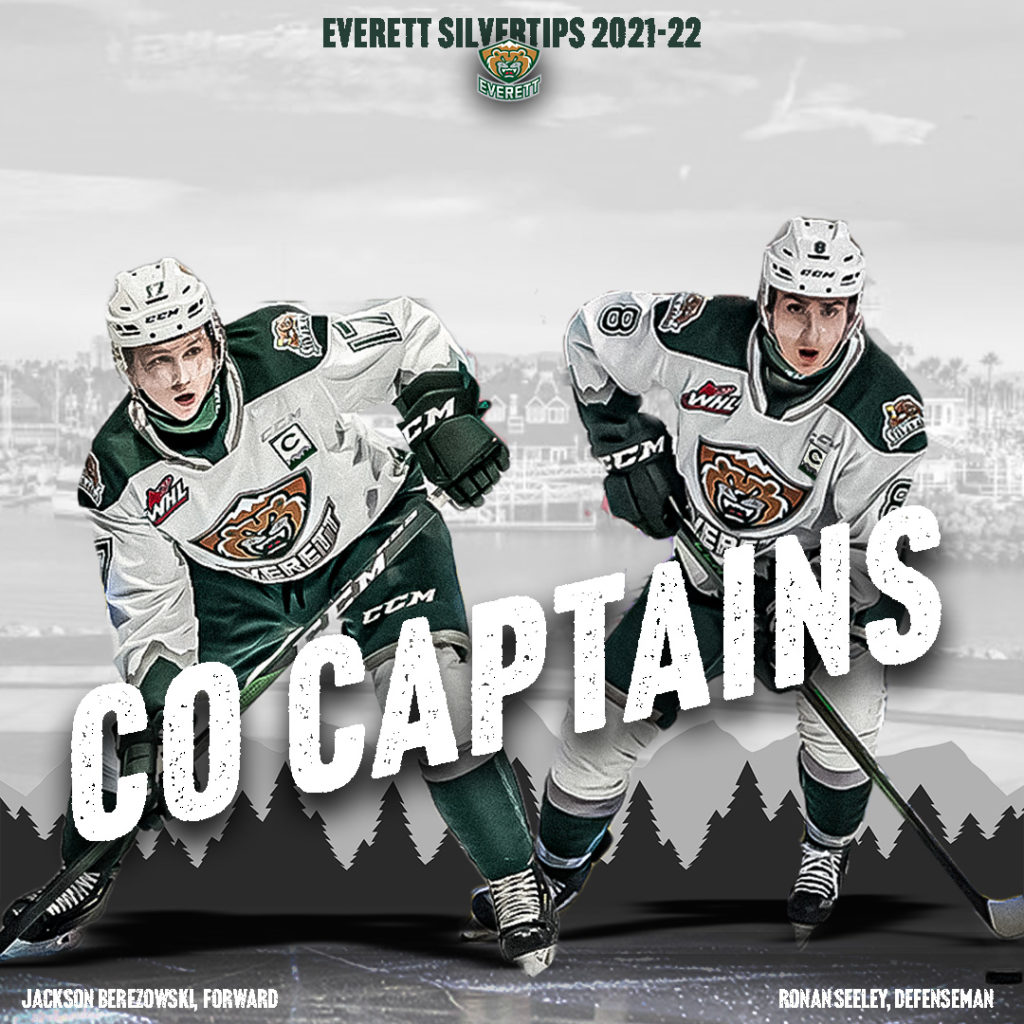 Succeeding both Gianni Fairbrother and Cole Fonstad, serving in the co-captain roles last season, both players open their fourth full WHL season as 2002-born players coming off the franchise’s eighth U.S. Division title, captured last season with a 19-4 record in 23 games during a pandemic shortened WHL regular season, and have been a part of two U.S. Division titles since their first season of play. Both served on the Silvertips leadership group last season as assistant captains.

“Jackson Berezowski and Ronan Seeley are excellent individuals who have been prepared for this opportunity to serve as co captains of the Silvertips for the 2021-22 season,” said Silvertips general manager and head coach Dennis Williams. “Both individuals bring assorted leadership abilities from intensity to poise, and have earned the respect of their teammates. They’ll be looked upon for accountability, but ultimately understand the tenets of our core values that embrace a cohesive approach. We’re looking forward to their contributions in their new role.”

“It’s a big honor to be named co-captain of the Silvertips along with a great teammate like Ronan Seeley,” said Berezowski. “Walking into our dressing room, you’re immediately exposed to the captain’s wall and so many great names that have built this program to where it is today. It inspires me to be the best leader I can be with Ronan, on and off the ice. We’ve become more experienced under great leaders like Connor Dewar, Bryce Kindopp, Gianni Fairbrother and Cole Fonstad. They’ve all gone pro, and it’s where we want to go too. We are dedicated to taking care of all our guys in the dressing room and be an influence to reach our goals in the regular season and postseason.”

“It goes without saying that it’s a huge honor to be named co-captain of the Silvertips alongside Jackson Berezowski,” said Seeley. “We realize it comes with huge responsibility, have gone through the ranks together in this organization, and had some great leaders in the last few years who have shown us what it takes to be a leader as well as what it takes to be a successful team in this league. We both know what we bring, on and off the ice, and know what to expect from each other as well as the rest of the team – so we will be holding ourselves to the highest standard. Dennis Williams has created a culture of winning and success here in Everett and we’re fortunate to have been a part of that over the last three years. Our mission is to continue building that culture and reputation.”

Berezowski, 19, last season was tied for third on the program in points (21), also earning seven goals and 14 assists in 23 games along with a +11 rating. The season prior, he hit career highs in goals (18), assists (18), points (36), plus-minus (+13), and power play goals (8) in 61 games while helping the Silvertips finish second in the U.S. Division, one point behind Portland before the pandemic stopped the remainder of the season.

Last season he registered five multi point games, finished the campaign with six points in the final five games, and earned four power play goals. In 149 career WHL games, all with the Silvertips, the native of Yorkton, Saskatchewan has earned 72 points (36g-36a) along with three points (2g-1a) in 10 career WHL Playoff games.

Seeley, 19, last season was named to the WHL U.S. Division All-Star Team with five goals and 17 points in 23 games during the pandemic shortened schedule while leading led all U.S. Division skaters, and finishing tied for fifth in the WHL with a +18 rating. As a part of the Silvertips the season prior, his second full campaign, the Olds, Alberta native collected 32 points (3g-29a) in 63 games, a 23-point jump from his rookie season.

Seeley was selected in the seventh round by the Carolina Hurricanes in the 2020 NHL Entry Draft and earned four multi point games during last season and finished the season with nine points in eight games. For four year WHL career, the Olds, Alberta native has 58 points (9G-49A) in 138 WHL regular season games, all with the Silvertips.