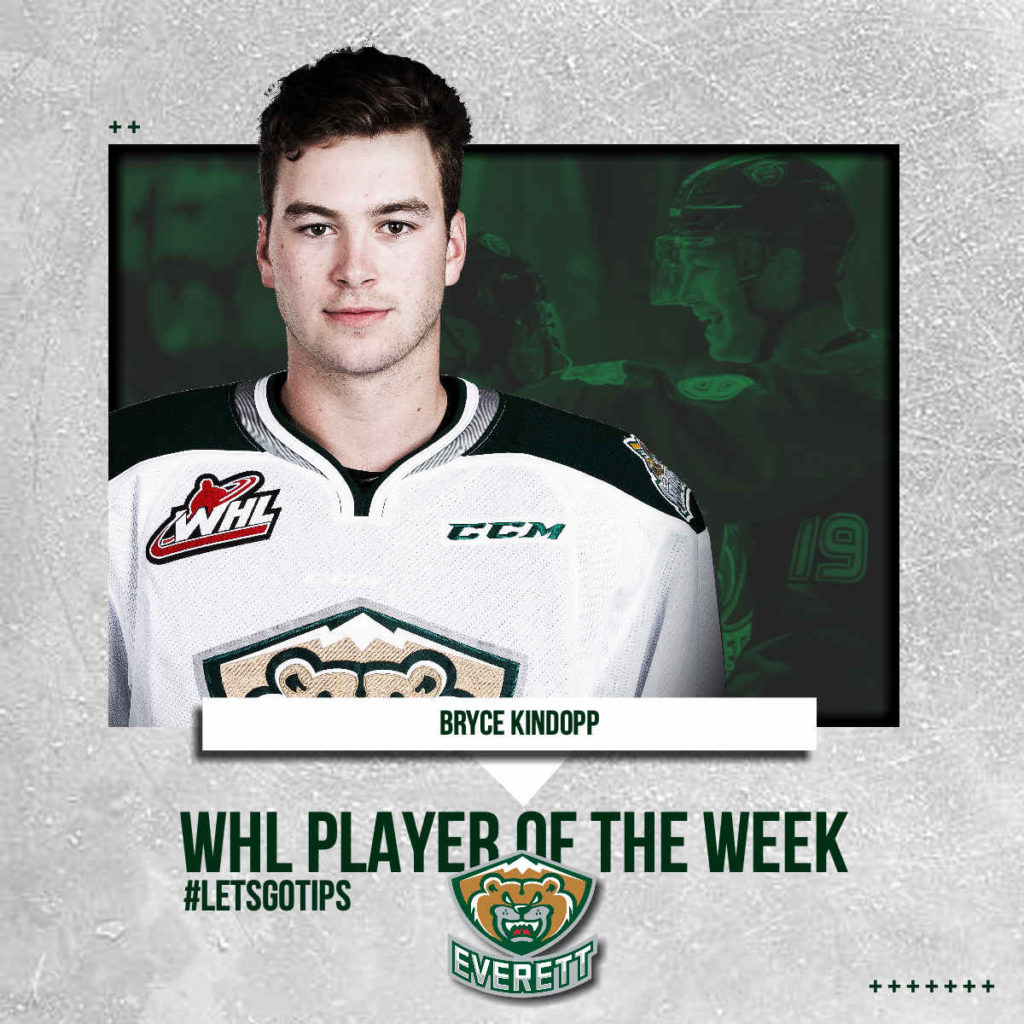 EVERETT, Wash. – The Everett Silvertips (@WHLSilvertips), seven-time U.S. Division champion and two-time Western Conference champion of the Western Hockey League, announced in conjunction with the WHL that Silvertips captain and right winger Bryce Kindopp has been named WHL On the Run Player of the Week, ending Sept. 22.

Kindopp, 20, recorded six points (3g-3a) and a plus-three rating in two games as the Silvertips split their opening two games of the 2019-20 WHL Regular Season. On Opening Night last Friday in downtown Everett, Kindopp recorded a goal and an assist in a 4-2 loss against the Tri-City Americans, earning the primary assist on the Tips’ first goal of the game, then scored his first goal of the season midway through the third period.

In Saturday’s 6-0 win against the Victoria Royals, Kindopp elevated his production with a pair of goals and four points, the second four-point outing of his career and a goal or assist shy of his career high.

The 6-foot-2, 190-pound forward scored Everett’s second and fifth goals of the game while recording primary assists on the team’s first and third goals. When he boosted the Tips lead to 2-0 just 17 seconds into the second period, his goal placed him alone at 17th on the Silvertips all-time points list, surpassing Dan Gendur and Torrie Wheat.

He was named the third star of the game for his efforts and all three of Kindopp’s goals this past weekend came at even strength.

On Sept. 19, the Silvertips named Kindopp the 17th captain in franchise history after returning to the Silvertips as a free agent invitee to Colorado Avalanche training camp (NHL). The native of Lloydminster, Alta. is coming off a 2018-19 season that saw him post career-high totals in all three major offensive categories, recording 73 points (39G-34A), including 12 power-play goals, five short-handed goals, and 10 game-winning goals in 67 games.

The Silvertips originally selected Kindopp in the third round, 49th overall, of the 2014 WHL Bantam Draft.

The Tips season ticket packages and mini plans are on sale now, available at www.everettsilvertips.com/season or by calling (425) 252-5100 during normal business hours.

UP NEXT: The Tips open a four-game road swing starting on Saturday, Sept. 28 against the Kelowna Rockets at 7:05 p.m. (KRKO / WHL Live) and return home on Friday, Oct. 11 for a 7:35 p.m. match-up with the Kamloops Blazers at Angel of the Winds Arena.