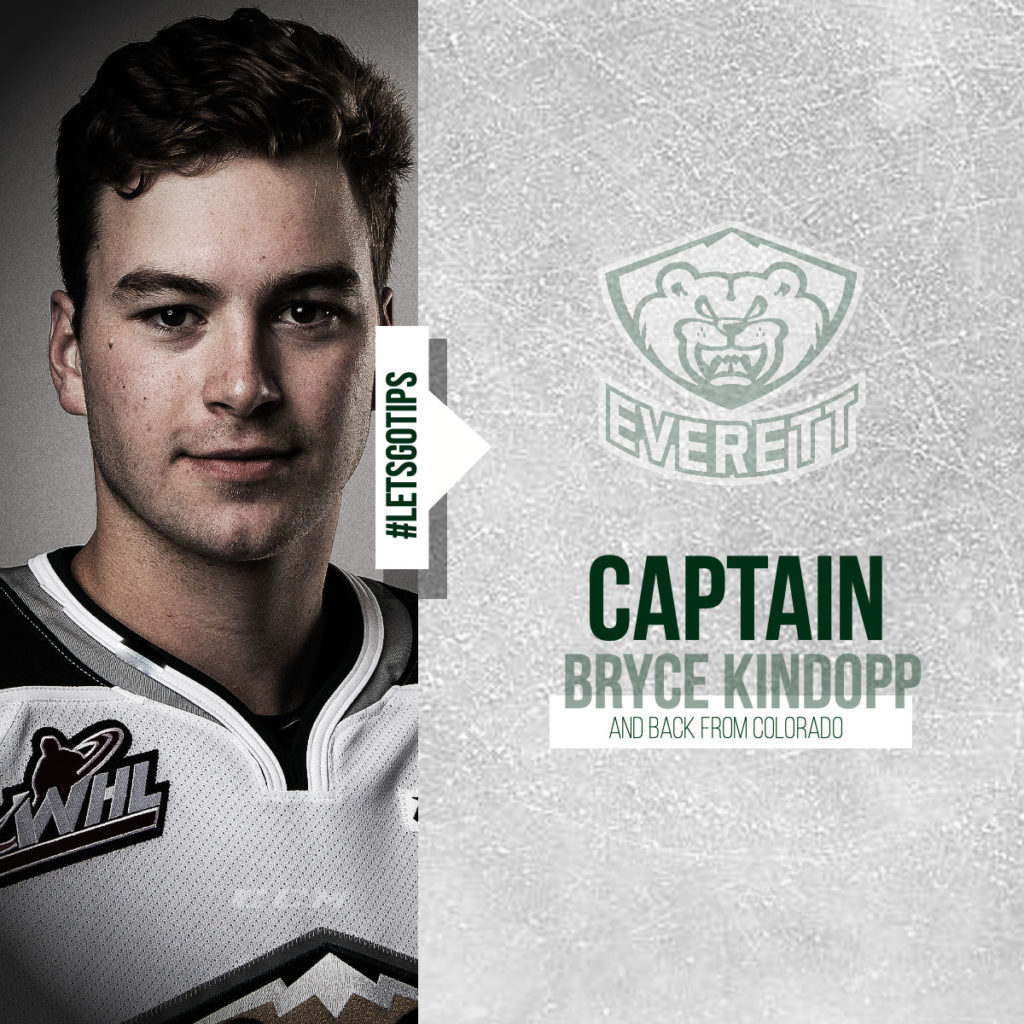 Bryce Kindopp Named Captain of the Everett Silvertips for 2019-20 Western Hockey League Season and 17th in Franchise History, and Assigned from the Colorado Avalanche (NHL)

EVERETT, Wash. – The Everett Silvertips (@WHLSilvertips), two-time Western Conference champions and seven time U.S. Division champions of the Western Hockey League, announced today that right winger Bryce Kindopp has been assigned to the Silvertips from the Colorado Avalanche (NHL) and has been named the 17th captain in Everett Silvertips history, scheduled to wear the “C” on his jersey for the upcoming 2019-20 WHL season.

“Bryce Kindopp is what you want in an Everett Silvertip,” said Silvertips head coach Dennis Williams. “He brings passion, a high compete level, plays the game the right way, and is a model example of how to lead our younger players both on and off the ice as our captain for the 2019-20 season. I can’t remember the last time Bryce had an off night. He commits to all the winning details we embrace here in Everett: tracking, strong stick, board battles, puck management and discipline. All those elements are what we want from our guys and it’s no surprise it led to the year he had last season.”

Williams continued, “More importantly, he’s earned this role not because of leading us in goal scoring. It’s his consistency with his winning habits and details, and it’s second to none. He’s embraced the joy and passion of being at the rink every day, and how to shift focus to a serious work environment. Bryce has been able to benefit from learning and leading beside some of the great leaders that we’ve had in the past with the likes of Connor Dewar, Riley Sutter, Matt Fonteyne, and more. With his experience, he’s more than ready to lead our group into the 2019-20 season.”

Kindopp, 20, has competed as a free agent invite to development camp and rookie camp with the Colorado Avalanche, and led the Silvertips last season with 39 goals while setting additional career highs in assists (34) and points (73) in 67 games, named recipient of the team’s Unsung Hero award and co-recipient of the Silvertips Iron Man award.

He led the club with a +37 rating, second highest in Silvertips single season history, and was tied for the Tips lead in power play goals (12). Kindopp recorded 24 multi point games, a career-high five points (2g-3a) on Jan. 26 vs. Lethbridge, and his first career hat trick on Feb. 1 against the Seattle Thunderbirds.

The 6-foot-1, 185 pound forward from Lloydminster, Alberta earned his first career playoff and a four-point effort on Mar. 30 when the Tips eliminated Tri-City in a Game 5, first round victory.

In 203 games during his WHL career, all in Everett, he has logged 123 points and 70 goals along with 21 power play goals. He ranks 10th all time on the Silvertips goal scoring list and last season’s 39-goal campaign ranked fourth highest in Silvertips history.

Kindopp has suited up for four U.S. Division title teams in five Silvertips seasons and made his WHL debut as an affiliated player call-up during the 2014-15 season. He was the first player from the Silvertips 2014 draft class to sign a WHL standard player agreement, and was selected in the third round (49th overall) of the 2014 WHL Draft.

“It’s a huge honor and it means a lot to wear the C for the Everett Silvertips this upcoming season,” said Kindopp. “Being a roommate of Connor Dewar helped me learn the details of leadership and how those qualities are common with every captain in our history, and you gain a sense of that even more when you look at that list. I’m looking forward to leading us to another great year. Being a leader is a quality that every player in our room is capable of. I’m committed to showing the importance of details, preparation, speaking up at the right time, and leading by example on the ice.”

Kindopp will be welcomed back to downtown Everett as newly appointed captain tonight at the Silvertips Ticket Package Holder Meet and Greet, 6:30 p.m. at Angel of the Winds Arena. The Silvertips officially launch the 2019-20 season with Opening Night, presented by Lamoureux Real Estate and SoundTransit (magnetic schedule giveaway) on Sept. 20 vs. Tri-City at 7:35 p.m. and finish the weekend the following night against the Royals, 7:05 p.m. with both games set in downtown Everett.