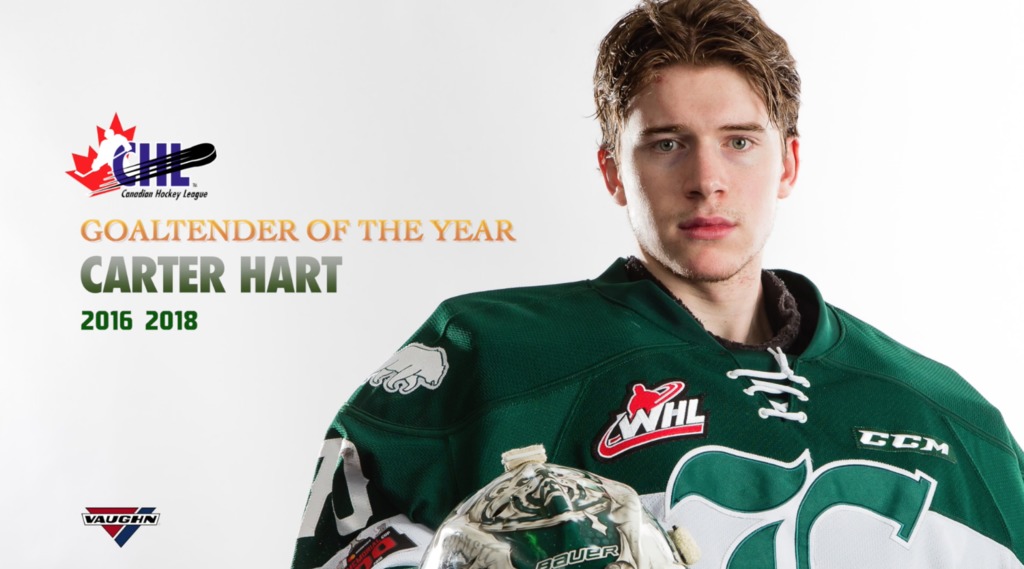 EVERETT, Wash. – The Everett Silvertips (@WHLSilvertips), two-time Western Conference champions and six time U.S. Division champions of the Western Hockey League, announced today that goaltender Carter Hart has been named recipient of the Vaughn Canadian Hockey League Goaltender of the Year Award, making history as the first two-time recipient of the award in CHL history. The award was announced today in conjunction with the CHL at the 2018 MasterCard Memorial Cup festivities in Regina.

“The Everett Silvertips organization proudly congratulates Carter Hart as the first two-time winner of the Vaughn CHL Goaltender of the Year award in CHL history,” said Silvertips general manager Garry Davidson. “Carter’s work ethic, dedication, and results have developed in a timely manner to create this accomplishment. It’s another terrific moment in Silvertips history, and without question he has made a tremendous impression on the game in the Pacific Northwest.”

“Carter Hart is an elite level talent with tremendous dedication, and many congratulations go to him for a well-deserved honor as the first two-time winner of the award in CHL history,” said Silvertips head coach Dennis Williams. “He is a player who carries pro-ready skills for his position. His attitude, focus, and tireless work ethic are qualities that have sharpened those skills and helped set a tone for our group at the rink every day. We’re very proud of him for this accomplishment.”

Hart, 19, finished his fourth WHL and Silvertip season helping guide the Tips to their second Western Conference title and appearance in the Rogers WHL Championship Series. Recently the first recipient in Tips history of the Four Broncos Memorial Trophy (WHL Player of the Year), and the first goaltender in WHL history to earn the Del Wilson Trophy (WHL Goaltender of the Year) on three consecutive occasions, he is a seven-time recipient of the WHL Goaltender of the Week award (16 in his career) and four-time recipient of the WHL Goaltender of the Month award this season. The 6-foot-2, 185-pound goaltender went 14-5-3 in the WHL Playoffs and was second in wins (14), minutes (1,325), goals-against-average (2.40), save percentage (.921), and tied for second in shutouts (2).

“It’s a huge honor to win this award for a second time and it’s reflective of the great year we had in Everett,” said Hart. “It was great because a lot of things were accomplished – not just on an individual level, but on a team level as well. This was a special group that came together and had a huge run in the playoffs. We had fun going to the rink every day and made a lot of memories together as teammates. I’ll never forget these guys, who created the tightest group I’ve ever been with in my WHL career. I’ll never forget my coaches, teammates, billet parent Parker Folds, and roommate Riley Sutter who was like a brother to me. They all made this moment possible.”

Named WHL First Team All-Star, he is a three-time recipient of the Silvertips Most Valuable Player award and carries a lifetime record of 116-46-10-2 with a .927 save percentage, 2.01 goals-against-average and 26 career shutouts in 190 WHL games, all with the Silvertips. He is the franchise goaltending leader in wins (116) and is tied for the WHL all-time lead in shutouts (26) with Tyson Sexsmith of Vancouver.

The 6-foot-2, 185 pound goaltender led the WHL this season in goals against average (1.60), save percentage (.947), shutouts (7), and was fourth in wins (31) while compiling a record of 31-6-1-3 in 41 games. He helped Canada capture the gold medal at this season’s World Junior Championship tournament. He had a 13-game winning streak this season, surrounding his gold medal accomplishment in Buffalo and was named to three straight WHL Goaltender of the Month honors.

His first CHL honor came in 2015-16, when his 35 wins in the regular season led the WHL and was second in goals against average (2.14), tied for second in shutouts (6), and second in minutes (3,693), en route to a 35-23-1-3 record and First Team All-Star selection in the Western Conference of the WHL. Hart was the first goaltender selected in the 2016 NHL Entry Draft, picked by the Flyers in the second round (48th overall).

He's the first two-time winner of the Vaughn @CHLHockey Goaltender of the Year award.

CHL Goaltender of the Year Award, Past Recipients:

Silvertips Season Ticket packages for 2018-19 are available starting with a $50 deposit at www.everettsilvertips.com/season or by calling (425) 252-5100. Select-A-Seat, open to Tips Season Ticket Holders by RSVP, is June 2 at Angel of the Winds Arena.