Carter Hart is Good as Gold 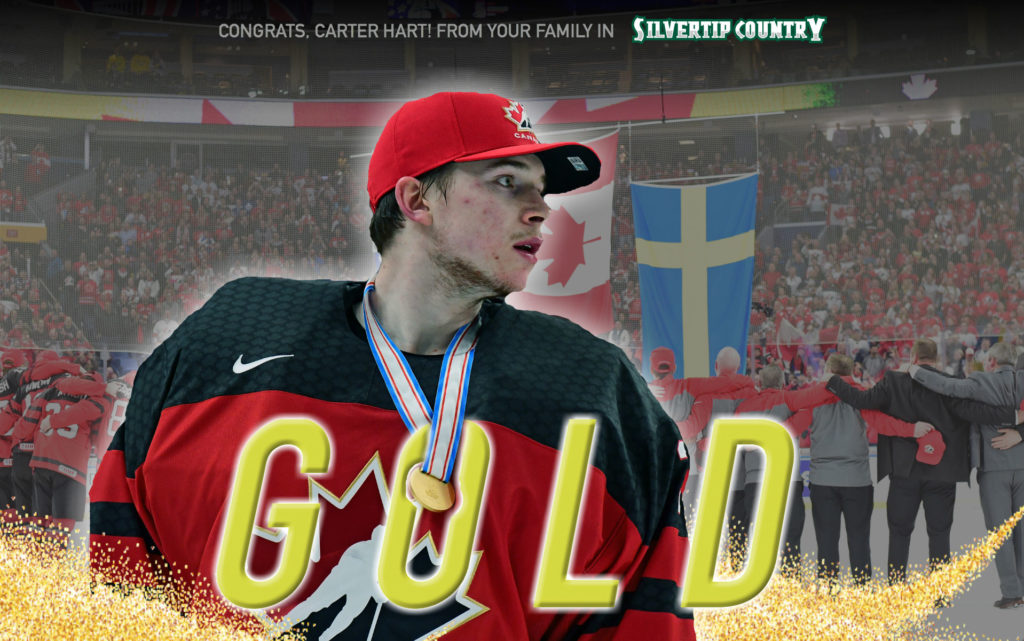 BUFFALO, N.Y. – Everett Silvertips goaltender Carter Hart was named Player of the Game with 35 saves to help lift Hockey Canada to the gold medal in a 5-1 victory over Team Sweden in the championship game of the 2018 IIHF U20 World Junior Championships at Key Bank Center in Buffalo on Friday.

Hart’s gold medal is the second in his career for international play after capturing gold at the Ivan Hlinka Memorial Cup in 2015. His victory in the title match was his eighth in international competition at the World Juniors, tying Canada’s record shared with Jimmy Waite and Stephane Fiset.

For the tournament, Hart was named Player of the Game twice and went 5-0-0-1 in six games, totaling a 1.64 goals-against-average and .935 save percentage. Hart has three Player of the Game honors in his World Juniors career and captured a silver medal last year in Montreal against the United States.

Hart, 19, entered the tournament coming off a 5-0-0-0 run with the Silvertips in December (eventually named Vaughn WHL Goaltender of the Month) and has compiled a career record of 98-43-9-10 with a 2.05 goals against average, .926 save percentage, and is the Silvertips all-time leader with 24 shutouts, second all-time in WHL history.

The Sherwood Park, Alberta native was selected in the second round, 48th overall, by the Philadelphia Flyers in the 2016 NHL Draft, and is 13-3-0-1 in 17 games with the Silvertips this season, leading the WHL in save percentage (.961), goals-against-average (1.32) and shutouts (5).
The Tips return home Saturday, and host the Portland Winterhawks at 7:05 p.m. Tickets are on sale at www.everettsilvertips.com/tickets.