ATTENTION SEASON TICKET & PACKAGE HOLDERS: THE REST OF YOUR TICKETS WILL BE READY FOR PICK UP IN THE SILVERTIPS OFFICE STARTING ON FRIDAY, NOVEMBER 5 - CLICK FOR MORE DETAILS
March 21, 2018 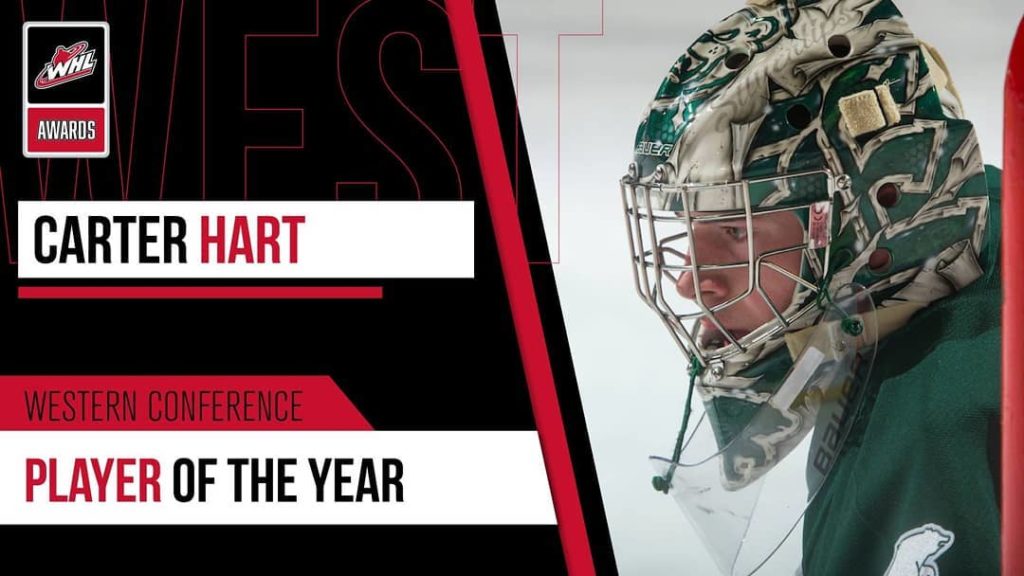 Hart, 19, who is the back-to-back recipient of the WHL Goaltender of the Year award and 2016 CHL Goaltender of the Year honors, is a three-time recipient of the Silvertips Most Valuable Player award and carries a lifetime record of 116-46-10-2 with a .927 save percentage, 2.01 goals-against-average and 26 career shutouts in 190 games, all with the Silvertips. He is the franchise goaltending leader in wins (116) and is tied for the WHL all-time lead in shutouts (26).

The 6-foot-2, 185 pound goaltender led the league this season in goals against average (1.60), save percentage (.947), shutouts (7), and was fourth in wins (31) while compiling a record of 31-6-1-3 in 41 games. He helped Canada capture the gold medal at this season’s World Junior Championship tournament and is a second round selection (48th overall) of the Philadelphia Flyers in the 2016 National Hockey League Entry Draft. Following that summer, Hart was welcomed back to the Pacific Northwest as the ceremonial first pitch honoree at Safeco Field on Sept. 6, 2016 when the Seattle Mariners hosted the Texas Rangers.

All individual WHL Conference Award winners will be eligible for the overall league awards at the 2018 WHL Awards luncheon in Red Deer, AB., on Wednesday, May 2. Hart is vying to become the first goaltender since Darcy Kuemper (Red Deer) to earn WHL Player of the Year honors as recipient of the Four Broncos Memorial Trophy. He is vying to become the first honoree of the Top Goaltender award in league history for three straight years, and joins Chet Pickard (Tri-City), Mike Vernon (Calgary), and Ray Martyniuk (Flin Flon) as the only four goaltenders to earn the award on back-to-back occasions.

WHL Conference Awards are voted upon by all WHL General Managers and Head Coaches.