Christiansen: WHL On The Run Player of the Week 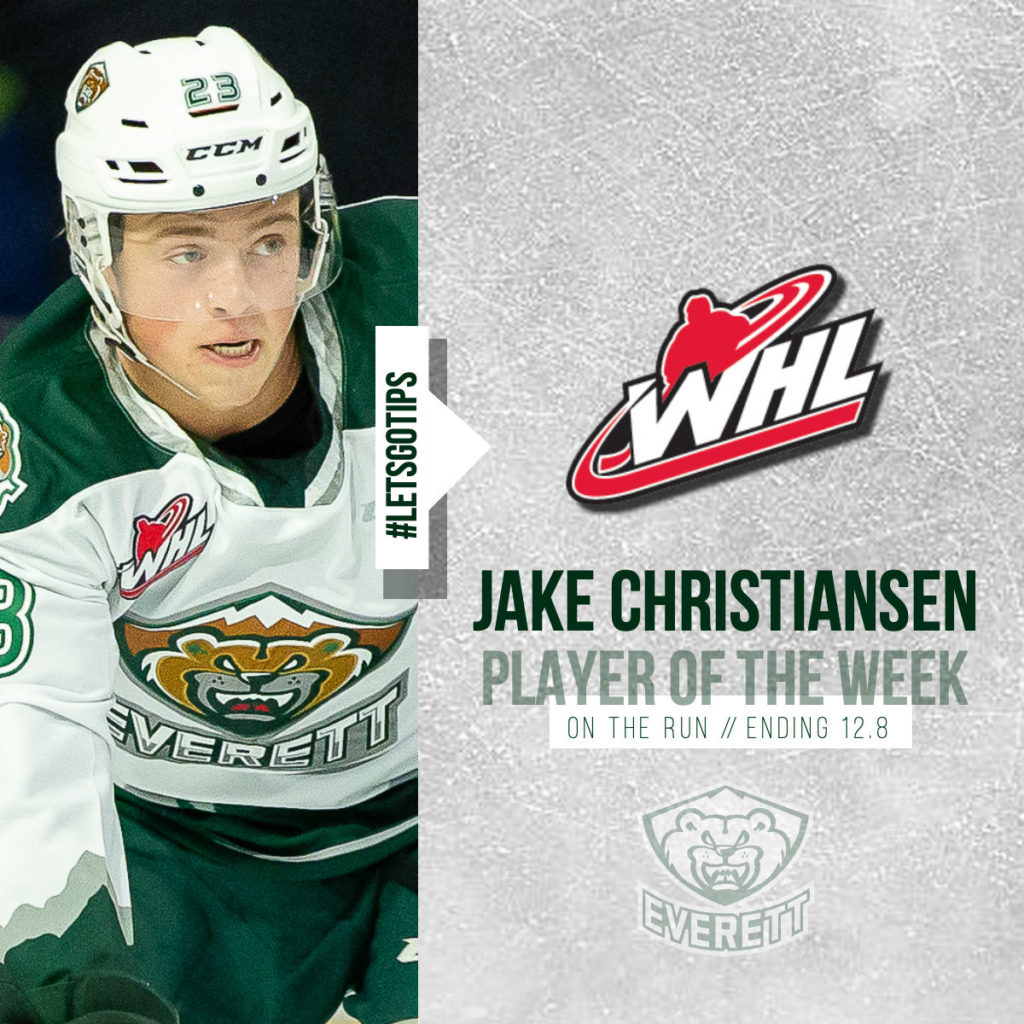 EVERETT, Wash. – The Everett Silvertips (@WHLSilvertips), seven-time U.S. Division champion and two-time Western Conference champion of the Western Hockey League, announced today in conjunction with the WHL that defenseman Jake Christiansen has been named the league’s On the Run Player of the Week for the week ending December 8, 2019.

Christiansen registered eight points (5G-3A) and a +7 rating in three games. The Silvertips went 4-0-0-0 on a trip this past week through four teams in the Central Division and have moved back into first place in the U.S. Division with a 21-6-1-0 record (43 points) through 28 games.

In his season debut Friday against the Swift Current Broncos, Christiansen recorded a goal and three points in a 5-1 victory. Christiansen scored the Tips’ fourth goal of the game, assisting on their third and fifth goals as well. He was named the third star of Friday’s game in Swift Current. On Saturday against the Medicine Hat Tigers, Christiansen recorded two goals as part of another three-point night in a 5-0 win. Christiansen scored the second and fifth goals of the game for the Silvertips, once again earning third-star honours for the game.

Sunday, he wrapped up his week with a two-goal performance in a 6-3 win against the Calgary Hitmen at Scotiabank Saddledome, returning to the home NHL venue of the Calgary Flames. As the Silvertips scored five unanswered goals to take control of the game, Christiansen scored back-to-back goals to lift the Tips to a 4-3 lead in the third period. He was named the first star of the game and the first star of the night in the WHL for his performance.

Through just three games this season, Christiansen already ranks in a WHL tie for 15th in goals. The 6-foot-1, 190-pound product of West Vancouver, B.C. was chosen by the Silvertips in the fifth round, 105th overall, of the 2014 WHL Bantam Draft. Since then the 20-year-old has recorded 110 points (33g-77a) in 262 WHL regular season games, including 12 power-play goals and five game-winning goals. In 51 WHL playoff games, Christiansen has totalled 17 points (3G-14A), including one game-winning goal.

Christiansen participated in rookie camp with the Calgary Flames (NHL) before the 2018-19 season and originally left the Silvertips this year on Sept. 6 to skate in St. Louis Blues development camp, shortly before signing a PTO agreement with Stockton, the AHL affiliate of the Flames.

The Silvertips are in action next against the Portland Winterhawks on Friday, December 13 (7:00 p.m. PT) at the Moda Centre (KRKO / WHL Live). The Tips return home for Teddy Bear Toss presented by Ace Hardware on Saturday, Dec. 14 against the Vancouver Giants, 7:05 p.m. in downtown Everett. Tickets are on sale with a large crowd expected, available at the link below. The game will also host the next Chick-fil-A Fan 4 Pack, offering 4 tickets and 4 sandwiches for as low as $56.