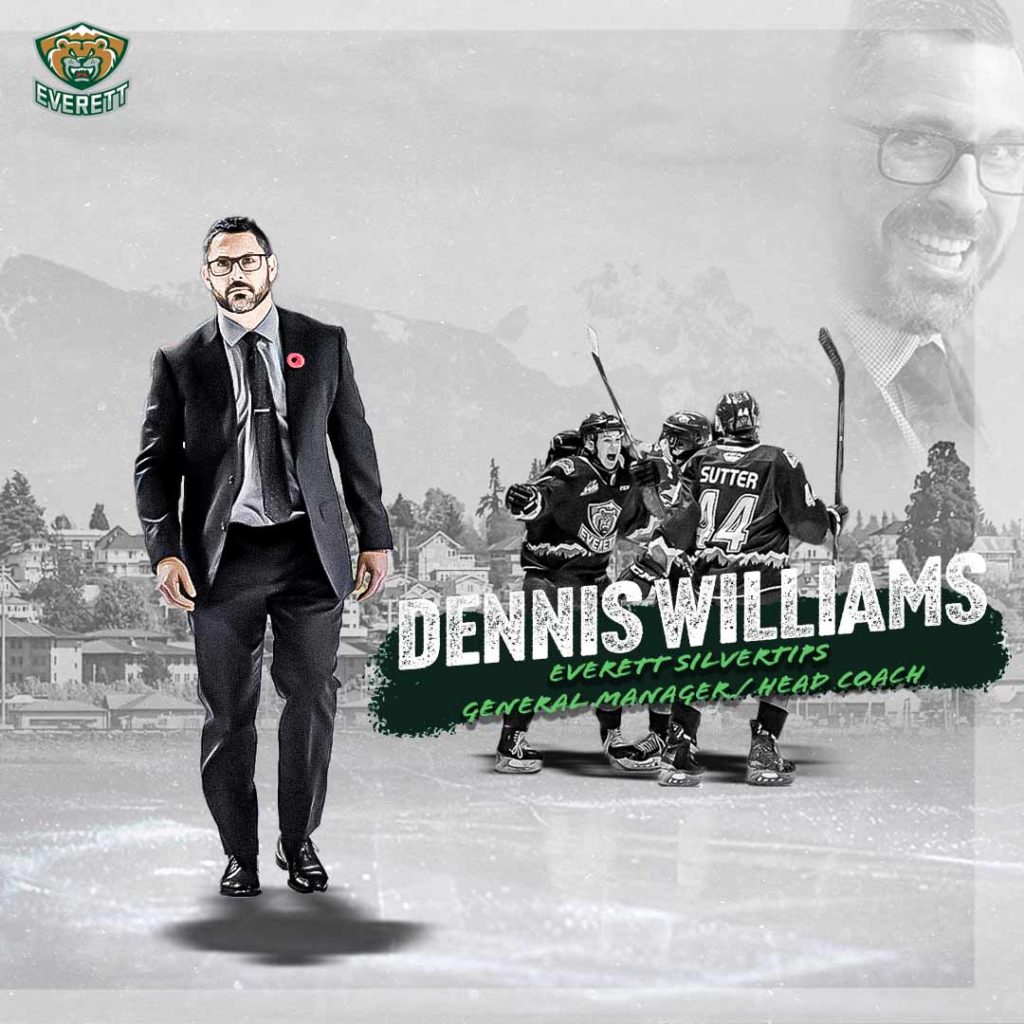 Williams will enter his fifth season as Silvertips head coach, removing the interim general manager title that was originally named on June 1 while adding to his duties, after helping guide the Silvertips to their fourth U.S. Division title in five seasons. He also returns to Hockey Canada’s coaching staff for the third straight year in a role associated with the Hlinka Gretzky Cup, the National Men’s Under-18 Team summer developments camp, July 25-Aug. 4 in Alberta. Team Canada, who has declined to participate in this year’s tournament due to COVID-19 restrictions, will feature 45 invited players for an 11-day camp which includes combined practices and intrasquad games with Canada’s National Junior Team.

“As time progressed, Dennis’ abilities with leading our team on the ice illustrated a strong connection with core values that help us address our immediate and long-term goals with building our program, all year round,” said Rajcic. “He understands, embraces, and applies the standards of excellence that have continued our winning tradition and helped our players achieve their dreams of reaching the NHL. He is connected, reliable, passionate, and committed, all important elements to make an impact as we continue to pursue a reputation as a flagship franchise in the WHL and an example of success for our game in the Puget Sound.”

“First and foremost, my thank you goes to our owner, Mr. Bill Yuill, and Zoran Rajcic for this opportunity and having the confidence in me to handle such a great and prestigious organization,” said Williams. “I am looking forward to working closely with Director of Player Personnel Mike Fraser and an exceptional scouting staff we already have in place to continue building a franchise that is renowned for development and long-term success. I believe in this team, organization, our fans, and the Pacific Northwest. My family and I very proud to be a part of it.”

Williams continued, “We’re a proud WHL franchise, and every player who walks through our doors deserves our commitment to help make their dreams come true. It’s a great day to continue moving forward in that direction.”

Under his guidance during the shortened 2021 WHL season, the Silvertips had players earn the following league awards and achievements:

The native of Stratford, Ontario, in addition to his coaching duties Hockey Canada in association with the Hlinka Gretzky Cup, also served as head coach for Team Canada Black at the 2018 U17 World Hockey Challenge.

Williams was named the fifth head coach in Silvertips history on May 15, 2017 and previously with the Amarillo Bulls (NAHL) as head coach and director of hockey operations, he led the franchise to a Robertson Cup title in 2012-13 and three national tournament appearances while going 168-44-2-24 and a points percentage of .756 across four years in the NAHL. With the Bloomington Thunder (USHL) as head coach and general manager, he guided the franchise to a trip to the Conference Finals in 2015-16. During his time in Amarillo and Bloomington, he helped 74 players advance to play in the NCAA ranks, and with the Bulls coached seven division All-Conference selections, two All-NAHL First Team members, and one division All-Rookie honoree. He has served Utica College and University of Alabama-Huntsville as assistant coach and started his head coaching career at the NCAA level with four seasons serving Neumann College and Bowling Green State University, both in head coach and assistant coach positions. The former right winger received his bachelors and masters degrees from Bowling Green, finishing with 117 career games, 20 points (12 goals, 8 assists), and 198 penalty minutes for the Falcons.

Williams, 41 (8/14/79), will continue to reside in Lake Stevens with wife, Hollie and their two daughters, Emerson and Elyse.