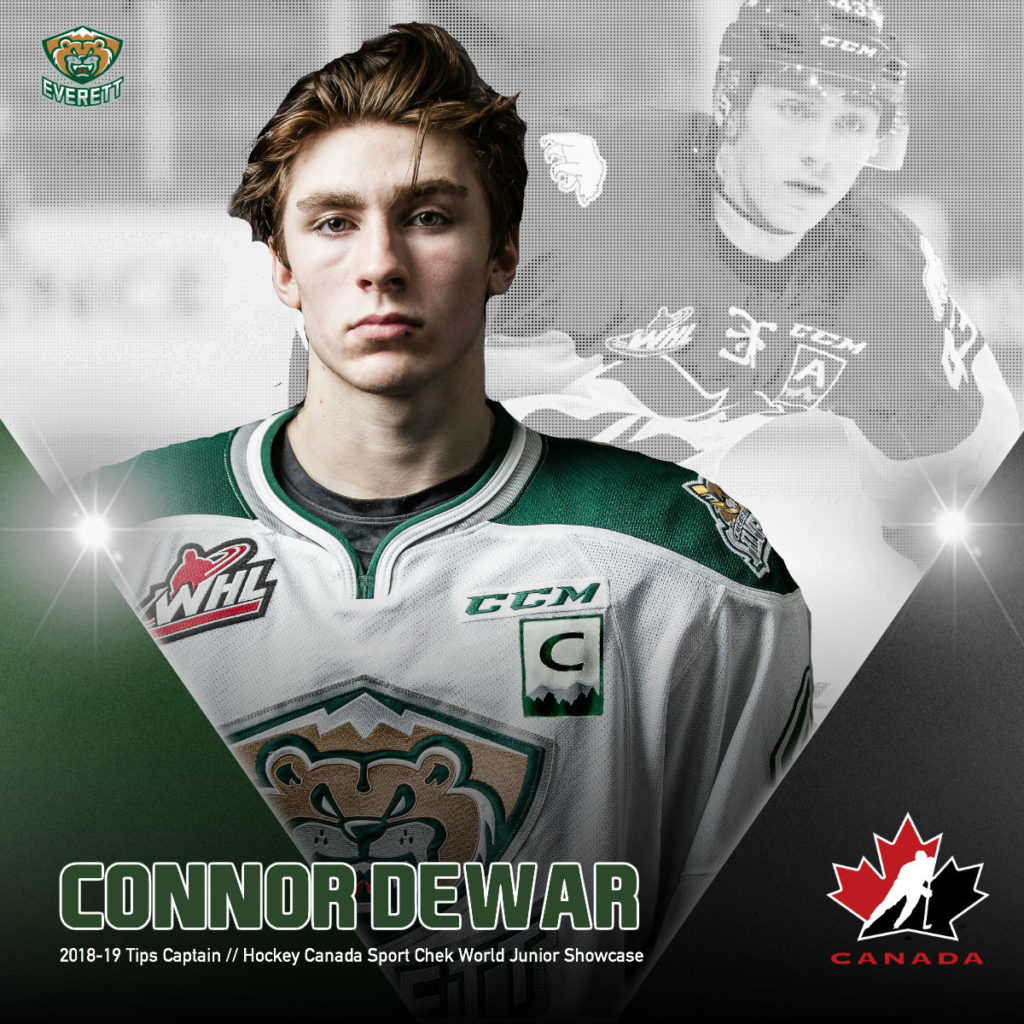 Dewar will be one of 40 players invited to Kamloops to compete for a roster spot with Team Canada at the 2019 IIHF World Junior Championships, hosted this coming season in Vancouver and Victoria, British Columbia. He is one of six players in the showcase selected in last month’s NHL Draft, and one of 11 from the WHL.

The 1999-born forward, selected by the Minnesota Wild in the third round (92nd overall) of the 2018 NHL Draft, is aiming to make the Silvertips a representative for Canada at the World Juniors for the third consecutive season. Goaltender Carter Hart (2017-18) and Noah Juulsen (2017) earned roster spots the previous two seasons, resulting in medal finishes including Canada’s run to gold in 2018 at Buffalo.

Dewar, who will serve as captain of the Silvertips in 2018-19, was named the Silvertips Most Dedicated Player this past season and shattered career highs in points (68), assists (30) and goals (38), leading the Silvertips in goals while becoming the youngest player in Silvertips history to reach the 38-goal mark. In the postseason, he was second on the program in points (26) and goals (12) in all 22 games, leading the entire league in plus-minus (+24) and shots on goal (106). He has been a part of two Silvertips teams that captured the U.S. Division title, and this season earned their second trip to the Rogers WHL Championship Series as Western Conference champions.

In Game 6 of the Western Conference Championship Series on Apr. 30, his goal at Tri-City with 10:08 left in the third period sparked a three-goal rally by the Silvertips out of a 5-2 deficit, eventually won by Kevin Davis’ overtime power play goal for the second Western Conference title in franchise history.

The native of The Pas, Manitoba has missed only five games in his WHL career, totaling 116 points (63g-53a) and a +19 rating in 211 career games, all spent in a Silvertips jersey. At age 16 he scored in his WHL debut, on opening night of the 2015-16 season in a Silvertips victory at Prince George. He was named co-recipient of the Silvertips Iron Man award and named Silvertips Rookie of the Year in 2015-16, and the following season became the youngest player in Silvertips history to earn the Booster Club F.I.E.R.C.E. Predator Award.

“The Sport Chek World Junior Showcase gives us an excellent opportunity to begin the evaluation process and for the staff to familiarize themselves with the players before the new season kicks off,” said Brad McEwen, head scout for Hockey Canada. “We also get to see the players in competition against the teams who will be returning to Vancouver and Victoria this December. It’s a unique opportunity, and we’re looking forward to making the most of it as we kick off our journey to the 2019 World Juniors later this month.”

The eight-day Sport Chek World Junior Showcase features Canada, Finland, Sweden, and the United States who will combine to play 11 games at the Sandman Centre. Canada will dress two squads for games against a split Team USA on July 31, before combining again as Team Canada to play Finland on Aug. 2, Sweden on Aug. 3, and close the mini-tournament against the United States on Aug. 4. Tickets may be purchased at www.hockeycanada.ca/tickets.