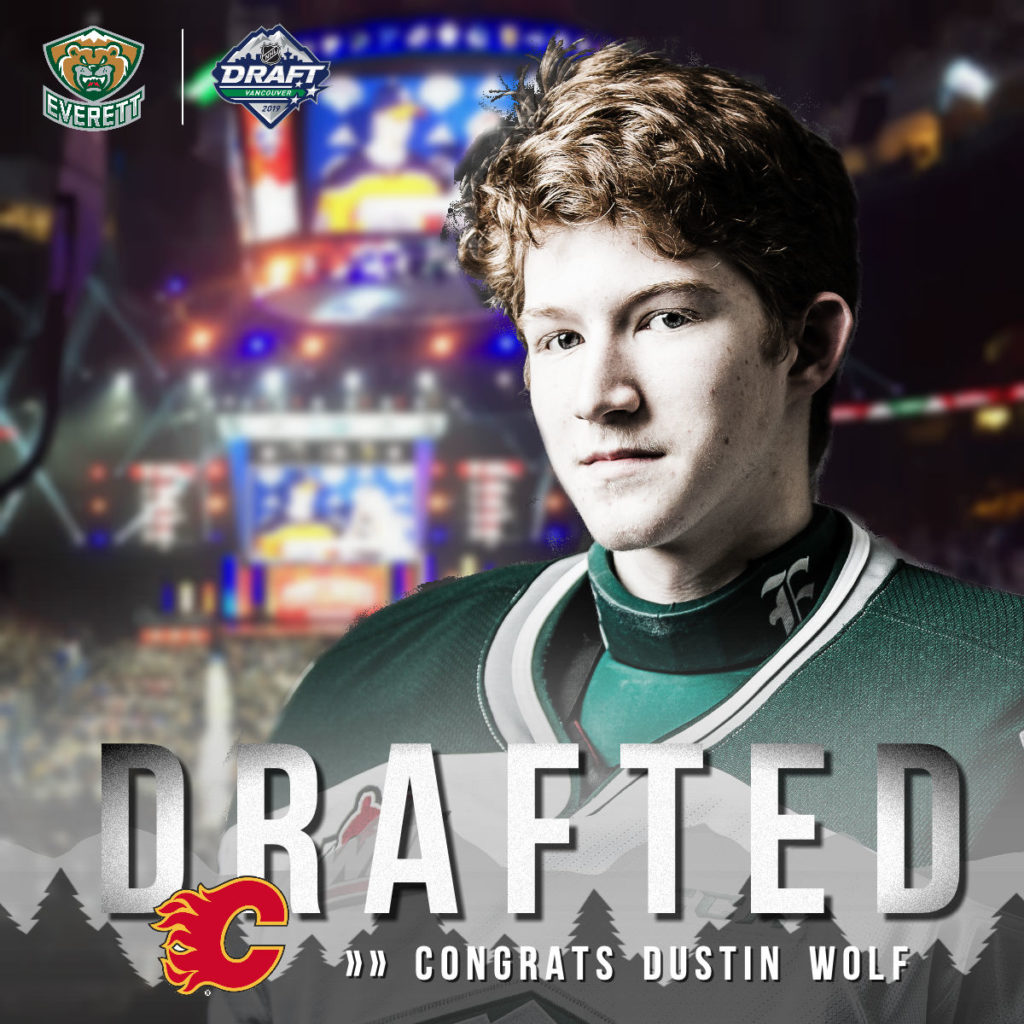 VANCOUVER – The Everett Silvertips (@WHLSilvertips), seven-time U.S. Division champions of the Western Hockey League, announced today that goaltender Dustin Wolf has been selected by the Calgary Flames in the seventh round (214th overall) of the 2019 National Hockey League Entry Draft.

“Dustin Wolf personifies preparation and perseverance – he’s earned this moment and we congratulate him on his selection by the Calgary Flames in the NHL Entry Draft,” said Silvertips general manager Garry Davidson. “His athleticism, focus, and talent are reinforced by spectacular numbers he’s put up in just two years with our organization. We’re extremely proud of him and the body of work he’s put together to potentially make an impact in the Flames organization.”

Wolf was also second in shutouts (7), and fourth in saves (1,493), posting the second highest save percentage in the franchise’s single season history, the second lowest goals-against-average in franchise history – and fourth lowest in WHL history.

His reception of the CHL Scholastic Player of the Year award was maintained with a 100% average across a Grade 12 workload covering four courses including English, Statistics, Economics, and American Government. Overall, Wolf posted a 98.8 percent average over his high school years.

Wolf, along with defenseman Gianni Fairbrother (Montreal), are among five Silvertips who have been selected in the NHL Draft over the last two years. A total of 19 players have made their debut in the NHL after suiting up for the Silvertips, who began play in 2003-04.

The Silvertips open the pre-season on Friday, Aug. 30 during the Delta Hotels Preseason Classic in downtown Everett, at 7:00 p.m. against the Tri-City Americans. The Tips regular season schedule for the 2019-20 season will be announced on Wednesday, offering full 34-game season tickets, 22-game, and 14-game plans for as little as $215 total per seat. Deposits for $50 will secure a seat for the 2019-20 season, available at www.everettsilvertips.com/season or by calling (425) 252-5100 during normal business hours (Monday through Thursday during the offseason, 9am to 4pm).