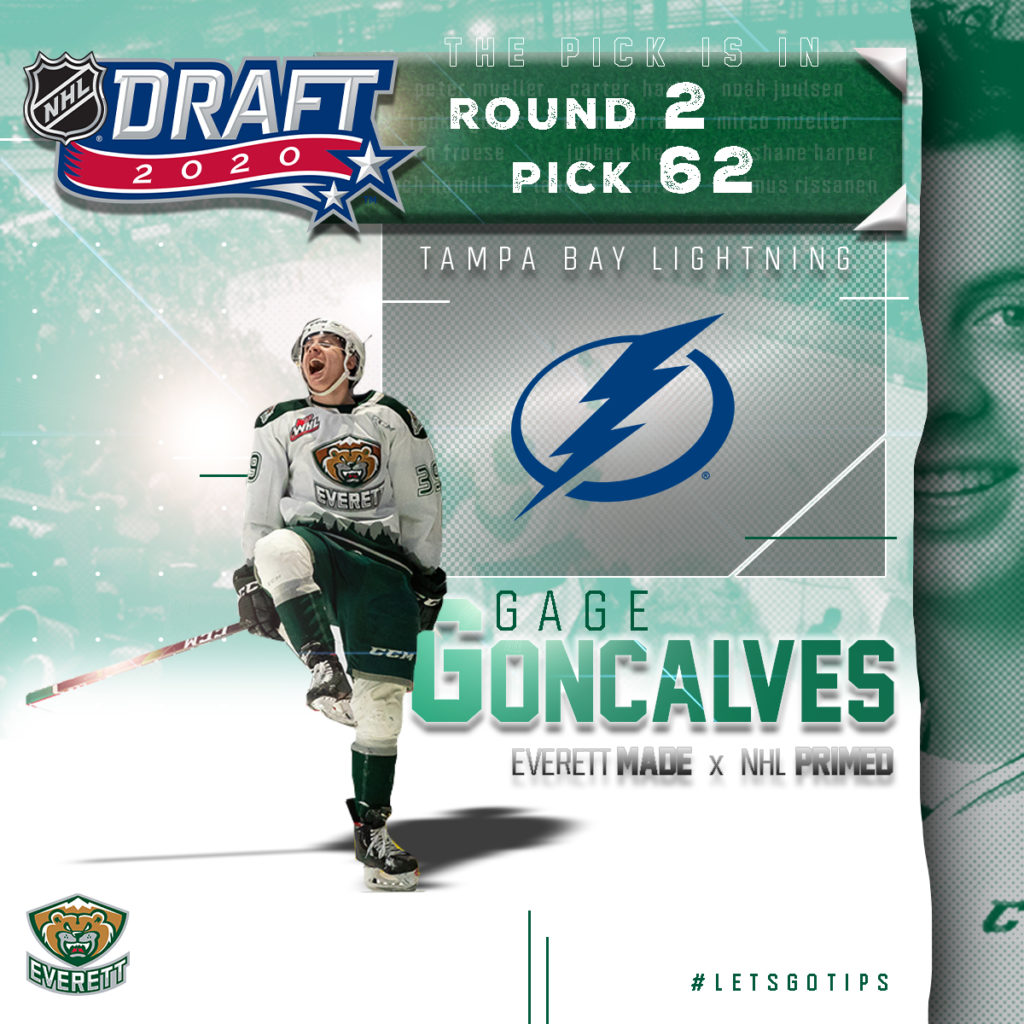 “Gage is a model human being for perseverance and work ethic, rightfully earning this moment as an NHL Draft pick,” said Silvertips general manager Garry Davidson. “Going from a one-goal to 33-goal season doesn’t happen on accident, and neither does the path he took from being a WHL listed player to legitimate Tampa Bay Lightning prospect, modeling a game which includes a quick release on his shot, intelligence, and effectiveness in all three zones of the ice. We’re extremely proud of Gage and look forward to continued progress in both our organization, and the Lightning organization.”

Goncalves, 19, was named Silvertips Most Improved Player this past season when he ranked third on the program in points (71), second in goals (33), third in assists (38), second in game winning goals (7), tied the lead in power play goals (14) and was +32 in 60 games. The Mission, British Columbia native experienced a 56 point and 32 goal increase from his 2018-19 rookie campaign and bagged 22 multi point games this past season including a pair of career-high four point outings.

From the @whlsilvertips of @thewhl, we’ve selected Gage Goncalves with pick No. 62!

His shootout goal against the Spokane Chiefs, on Dec. 15 received attention including a nomination on ESPN SportsCenter’s Top Ten Plays, when the Silvertips defeated Spokane, 4-3 in a shootout in downtown Everett.

Earlier this summer, Goncalves was named to Hockey Canada’s National Junior Team Sport Chek Summer Development Camp, July 27-31. He was part of a group including over 40 players attending a five-day virtual camp, participating in program sessions focusing on player development through online education in preparation of Team Canada roster selection for the 2021 IIHF World Junior Championship, scheduled for Edmonton and Red Deer in December.

Bolt up: congratulations @gage_goncalves on being selected by the @tblightning in Round 2!⚡️ #LetsGoTips x #NHLDraft ⚡️

Goncalves has 34 points, 52 assists, 86 points, and a +42 rating in 128 career games in a Silvertips jersey. The 6-foot-1, 170 pound forward was originally acquired by the Silvertips as a listed player and signed a WHL standard player agreement on Jan. 3, 2018, making his Silvertips and WHL debut four days later against the Victoria Royals.