SELECT-A-SEAT MONTH IS HERE | CLICK HERE FOR DETAILS & LOCK IN THOSE SEATS YOU HAVE ALWAYS BEEN LOOKING FOR!
October 7, 2020 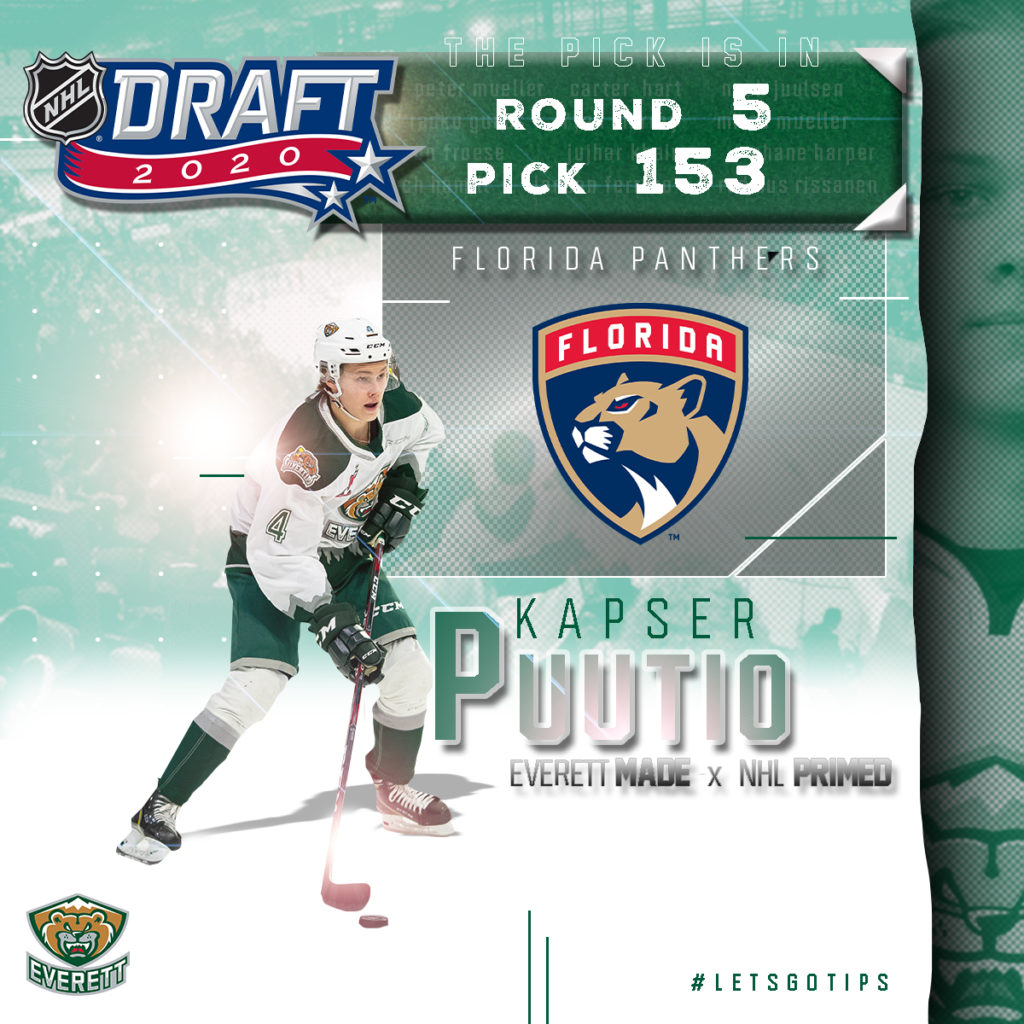 EVERETT, WA – The Everett Silvertips, proud seven-time U.S. Division champion and two time Western Conference champion of the Western Hockey League, announced today that defenseman Kasper Puutio (POOH-tee-oh) has been selected by the Florida Panthers in the fifth round (153rd overall) of the 2020 NHL Entry Draft.

“The Everett Silvertips congratulate Kasper Puutio on being selected by the Florida Panthers in the fifth round of the NHL Entry Draft,” said Silvertips general manager Garry Davidson. “Though we only acquired him several weeks before the sport’s pause in March, it took minimal time for his presence to make an impact and elevate our opportunities for the top record in the WHL. He’s a solid, two-way, all situations defenseman who has an incredible chance to refine a gifted skill set and late-game poise with the Panthers organization in the future. We’re fully championing his time in Finland to stay fresh and look forward to his contributions when the time is right to return to play in the WHL.”

The first overall selection in the 2019 CHL Import Draft, Puutio skated in the CHL / NHL Top Prospects Game in 2019-20 and registered 28 points (5g-23a) in 56 games with the Silvertips and Swift Current Broncos, his rookie WHL season. He earned 12 points in his first 21 games as a Silvertip after being acquired from Swift Current on Jan. 10 with forward Ethan Regnier in exchange for forward Martin Fasko-Rudas, defenseman Parker Hendren, and two WHL Draft selections.

The native of Vaasa, Finland finished +13 in his final 21 games of the season as a Silvertip, drilled a pair of power play goals, and scored full-length of the ice, empty net goal against the Prince George Cougars in a Feb. 21 victory. Puutio had points in six of the last eight games on the blueline, and after Feb. 15 earned 11 points in 12 games. Twice, he had a career high three points in one game, all on assists.

Puutio is currently on loan to Karpat (Liiga) in Finland and before last season had three assists in three games with Finland’s U18 squat at the Hlinka Gretzky Cup.