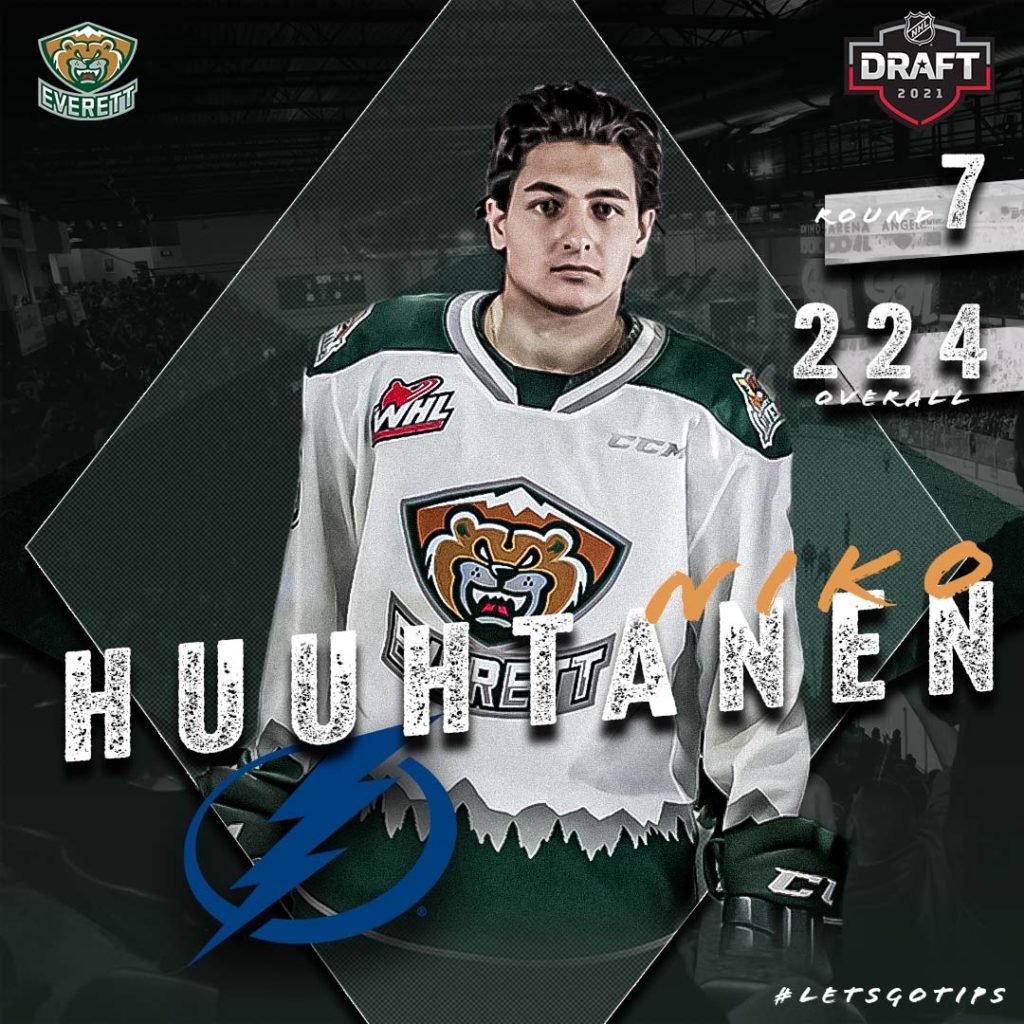 EVERETT, Wash. – The Everett Silvertips (@WHLSilvertips), two-time Western Conference champions and eight time U.S. Division champions of the Western Hockey League, announced today that forward Niko Huuhtanen has been selected by the Tampa Bay Lightning in the seventh round (224th overall) of the 2021 NHL Entry Draft.

“As Niko prepares for his first season as a Silvertip, we officially congratulate him today for being selected by the Tampa Bay Lightning in the NHL Entry Draft,” said Silvertips general manager and head coach Dennis Williams. “They now have a terrific player in the system for the future and his decision to commit to our program makes us excited to help accelerate his development. We have learned a lot about the abilities that have carried him this far and we’re confident it will make a great impact on his future teammates in a Silvertips jersey.”

Huuhtanen (HOO-tah-nen), a 2003-born forward who competed for Team Finland at the IIHF U18 World Championships in April, was selected second overall in the CHL Import Draft by the Silvertips on Jun. 30 and will join the Silvertips starting this upcoming season after being signed on Jul. 19 to a WHL Standard Player Agreement.

The native of Helsinki, Finland last season competed for the Tappara U20 club (Finland) and tied the team lead with 20 goals in 37 games, was the leader with 73 penalty minutes, ranked fourth with 34 points, and posted a +12 rating for a program helping develop alumni such as Patrik Laine, Aleksander Barkov, and Henri Jokiharju, all currently competing in the NHL. Huuhtanen added one goal in a pair of playoff games while helping Tappara advance to semifinal play with a regular season record of 17-8-3-2.

On the international stage, the 6-foot-1, 203-pound forward suited up for Team Finland at the U18 World Championships and helped the program advance to the Bronze Medal game, collecting five points (2g-3a) in seven games.

The native of Helsinki, Finland competed for Kiekko-Espoo’s U18 program with a goal and assist in one game in addition to 48 games with the U20 club where he was fourth in goals (18) and racked up 34 points (18g-16a) and 54 penalty minutes in 48 games. He also suited up for Team Finland in the Under-17 World Hockey Challenge and notched four points (1g-43a) in five games and totaled 9 points (1g-8a) in 15 games of overall international competition for Finland’s U17 squad.

TIPS AT THE NHL DRAFT
After selections today for Huuhtanen and Olen Zellweger (Anaheim), the Everett Silvertips have elevated 29 players to be drafted by NHL clubs, including ten in the previous four years. Last season, three Silvertips were selected in the draft – Gage Goncalves (Tampa Bay) in the second round, Kasper Puutio (Florida) in the fifth round, and Ronan Seeley (Carolina) in the seventh round.