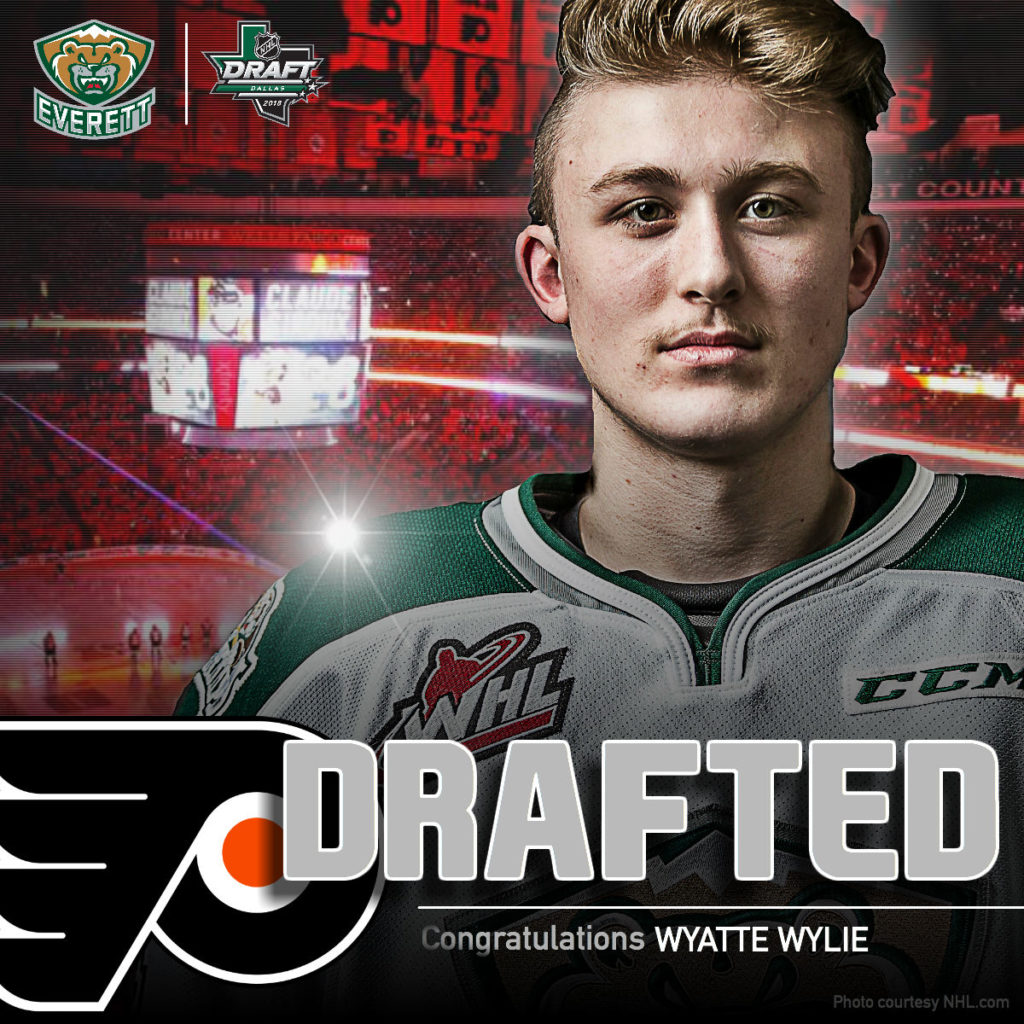 EVERETT, Wash. – The Everett Silvertips (@WHLSilvertips), two-time Western Conference champions and six time U.S. Division champions of the Western Hockey League, announced today that defenseman and Everett native Wyatte Wylie has been selected by the Philadelphia Flyers in the fifth round (127th overall) of the 2018 NHL Draft.

Wylie is the first Everett born player in history to be selected in the NHL Draft with development experience in Everett Youth Hockey, the Jr. Silvertips program, and in the WHL as a Silvertip player. Before starting his WHL career, Wylie additionally suited up for one season in 2015-16 with the Dallas Stars U16 program.

“It’s a landmark day to congratulate Wyatte Wylie on being selected by the Philadelphia Flyers in the fifth round of the NHL Draft,” said Silvertips general manager Garry Davidson. “Wyatte is a very coachable and dedicated hockey player who has continued to make strides as a defenseman who can make an impact. His background as a player born here, trained by Everett Youth Hockey, and developed in the WHL as a Silvertip is a great moment to further solidify Snohomish County as a proven grassroots region for our sport. We’re extremely proud of him and look forward this continued success.”

Wylie, 18, comes off career highs in points (31), goals (6), assists (25), and plus-minus (+12) while never missing a game all season, sharing the Silvertips Iron Man award and claiming the Silvertips Most Improved Player award for 2017-18. His eight points (2g-6a) in 22 playoff games were tied for 10th among WHL defenseman, while ranking among WHL defensemen in the postseason: fourth in shots (47), and tied for fourth in plus-minus (+12).

Wylie was one of three Silvertips listed in the final rankings by NHL Central Scouting prior to the draft, and joins teammates Connor Dewar (third round, Minnesota) and Riley Sutter (third round, Washington) as the most Silvertips taken in the NHL Draft since 2010.

What a day ! So excited and grateful to be a part of the @NHLFlyers excited for the work to start! Thanks to my family and teammates for all the support !

"Hearing [Dewar and Sutter] called … it got me so excited."

Wylie’s experience with the Jr. Silvertips (16U) program spanned three seasons across the midget and NAPHL (16U) levels, and he combined for 124 games and 77 points.