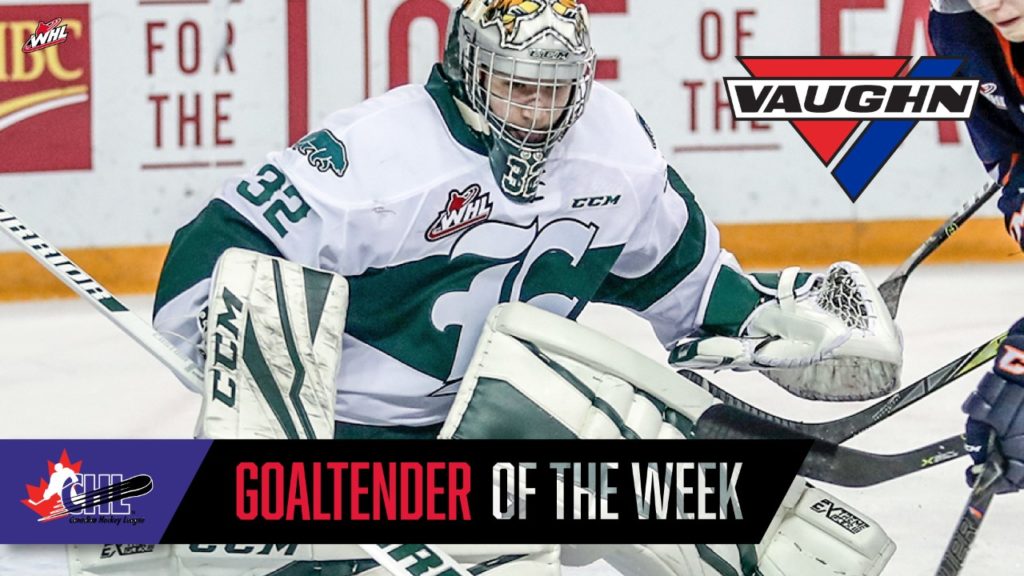 EVERETT, Wash. – The Everett Silvertips (@WHLSilvertips), in conjunction with the Canadian Hockey League, announced today that goaltender Dustin Wolf has been named Vaughn CHL Goaltender of the Week, for the week ending Oct. 29.

Wolf, 16, was named WHL Goaltender of the Week on Monday and became the youngest goaltender (16 years, 6 months, 11 days) in Silvertips history to earn a victory since Carter Hart (16 years, 1 month, 7 days) in 2014-15, and was in net for both Silvertips victories on the road, Friday at Kamloops and Sunday at Portland.

He was selected by the Silvertips in the fifth round from the 2016 WHL Draft (104th overall), and debuted on Friday at Sandman Centre in Kamloops, B.C., recording 38 saves as the Silvertips picked up a 3-1 victory over the Blazers. He was named the league’s third star of Friday night for his performance. The Tustin, Calif. native shut down the Blazers in the first and third periods of the game, stopping all 27 shots against in those two periods as the Silvertips cruised to a wire-to-wire victory.

On Sunday at Veterans Memorial Coliseum against Portland, who led the league with 40.5 shots per game entering the contest, Wolf made 44 saves on 46 shots for his second victory. He stopped 29 of 30 shots combined in the first and third periods while turning away all 16 shots faced in the second period. Wolf kept the Winterhawks, who entered the game averaging 5.0 goals per game (2nd, WHL) entering Sunday, scoreless for a combined 47:35 until Kieffer Bellows’ goal in the third period.