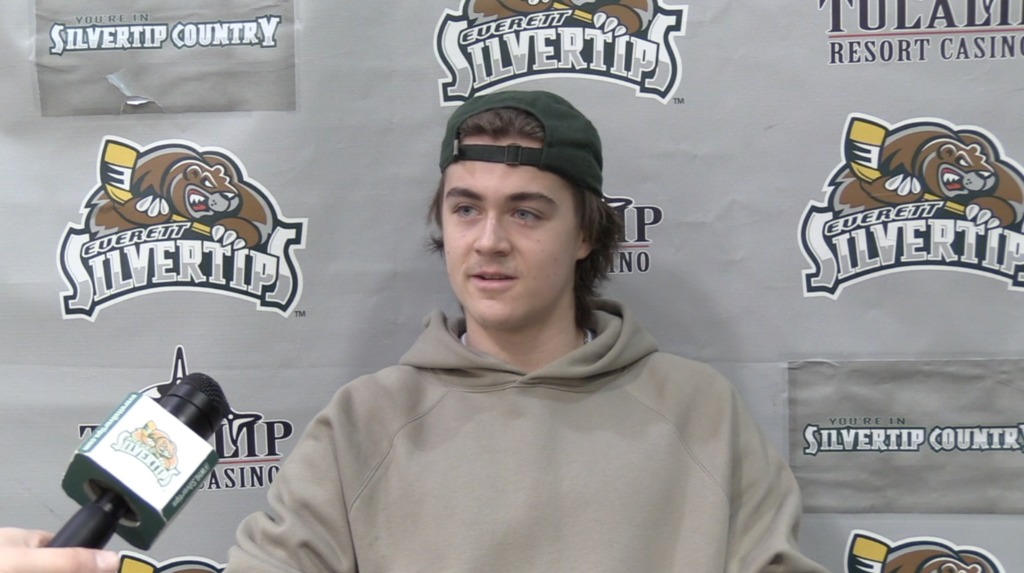 Conducted on Locker Clean-out Day — May 4, 2022 (To be updated throughout the week)

🎥 "It was kind of a record-book year for the team. It's something to build on next year."

🎥 Where does the Teddy Bear Toss goal rank in terms of memories this season?

🎥 "There's nothing like playoff hockey, it was just a really awesome experience."

Vincent Lamanna is hungry for more after his rookie season in Everett#LetsGoTips pic.twitter.com/70yhtEUBIl

🎥 "I think [my first goal] is number one, amazing memory. I think about it all the time."

Jesse Heslop made a big impression as an '06-birth year in his first few WHL games#LetsGoTips x @jesseheslop pic.twitter.com/s7QBNXS74j

Austin Roest felt the love of Silvertip Country as fans returned to the building this season.#LetsGoTips x @aroest14 pic.twitter.com/Sjgrf4kJuz

🎥 "Through all the ups and downs, we stuck together the whole year."

Aidan Sutter saw tons of growth personally and as a team in 2021-22.#LetsGoTips x @AidanSutter44 pic.twitter.com/oaZwKeDDyd

🎥 "Playing on the wing is definitely something to pick up and learn. I think it developed throughout the year and I became a better winger."

🎥 "Having that hat trick in Langley in front of all my family…I'll always remember that for sure."

Jacob Wright was a key performer year-round for the '21-22 Tips.#LetsGoTips pic.twitter.com/WG0gU7RYs6

🎥 "I wouldn't be able to [grow and improve] without this group and the staff around me, it's all about the environment."

Ryan Hofer, the Silvertips' Most Improved Player, reflects on an electric campaign.#LetsGoTips pic.twitter.com/n6MJnmvXEL

🎥 "Coming in, everyone really helped me fit in and adapt to the new league and everything."

Caden Zaplitny was a quick study in his first WHL season!#LetsGoTips pic.twitter.com/m380rrGYKj

🎥 "The Climate Pledge game…I don't think I'll ever forget that as long as I live."

🎥 "You don't really look at it 'til it's over…it leaves me hungry for next year."

🎥 "Just thanks for everything. It's been a pleasure."

🎥 "It was unreal, just coming out to all those cowbells and the really loud horn."

Tarin Smith got a quick introduction to Silvertip Country after being selected in the first round of the 2021 WHL Prospects Draft.#LetsGoTips x @TarinSmith4 pic.twitter.com/JYCVDl6CiS

🎥 "We had great leadership, led all the young guys and showed us the way around."

🎥 "Hanging out with the guys, seeing them every morning, that's what drives you through the grind."

Ben Hemmerling turned a lot of heads in his second season with the Silvertips.#LetsGoTips x @Hemmer_9 pic.twitter.com/Tt9qCQxtb9

🎥 "My parents were able to be there, getting announced on the ice was cool, raising that banner from last year…just being able to experience that."

🎥 "We came together a lot as a group, we found success early on and we kept it going. I'm proud of the guys."

Braden Holt, recently named to the NHL Central Scouting Final Rankings, looks back on a successful year between the pipes.#LetsGoTips x @holt40_ pic.twitter.com/1eGsqCCk3g

🎥 "The very last regular season home game, scoring a hat trick and clinching the U.S. Division…that has to be a favorite memory."