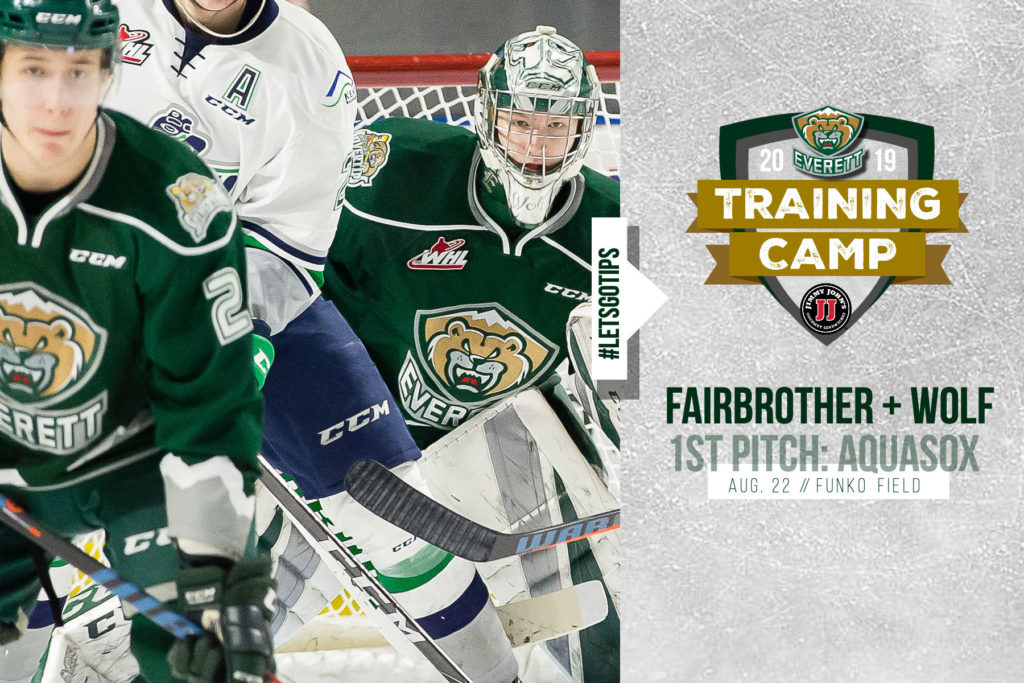 EVERETT, Wash.- The Everett Silvertips, seven-time US Division Champions and 2018-19 Western Hockey League Business of the Year, announced today that defenseman Gianni Fairbrother and goaltender Dustin Wolf will participate in the ceremonial first pitch on Thursday, August 22 at Funko Field, home of the Everett AquaSox, who will be playing the Spokane Indians at 7:05pm.

Fairbrother, 18, will be entering his third full season with the Silvertips after being drafted by the Montreal Canadiens in the 3rd round (77 overall) this past June at the NHL Entry Draft. This past season Fairbrother reached career highs, playing 64 games with 36 points (10g-26a) and a +23 rating. He played in all ten of the Silvertips playoff games this past season, assisting in four goals and ended the playoffs with a +6 rating. Fairbrother also was awarded as the Most Improved Player in the 2018-19 season at the end of the year awards.

Wolf, 18, was selected by the Calgary Flames in the seventh round (214th overall) of the 2019 National Hockey League Entry Draft after earning WHL Western Conference Goaltender of the Year, CHL Scholastic Player of the Year, Silvertips Most Dedicated Player, Community Relations, and Scholastic Player of the Year awards this past season. The 5-foot-11, 160-pound goaltender in 2018-19 broke the Silvertips record and led the WHL in wins (41), also leading the league in save percentage (.936), goals-against-average (1.69), and minutes (3,615). The Tustin, Calif. native was also second in shutouts (7), and fourth in saves (1,493), posting the second highest save percentage in the franchise’s single season history, the second lowest goals-against-average in franchise history – and fourth lowest in WHL history.

The Everett AquaSox are the Class A Short Season affiliate of the Seattle Mariners.

Silvertips fans interested in attending the game can purchase tickets at https://www.milb.com/everett/tickets/single-game-tickets.

Silvertips 2019 Training Camp presented by Jimmy John’s will get underway at 10:30am at Angel of the Winds Arena in downtown Everett on Aug. 22, followed by the Tips Prospects Game on Saturday at 3:00 p.m. and the annual Green vs. Grey Game on Sunday at Noon. All scrimmages are open to the public and further information is available at www.everettsilvertips.com/2019trainingcamp.