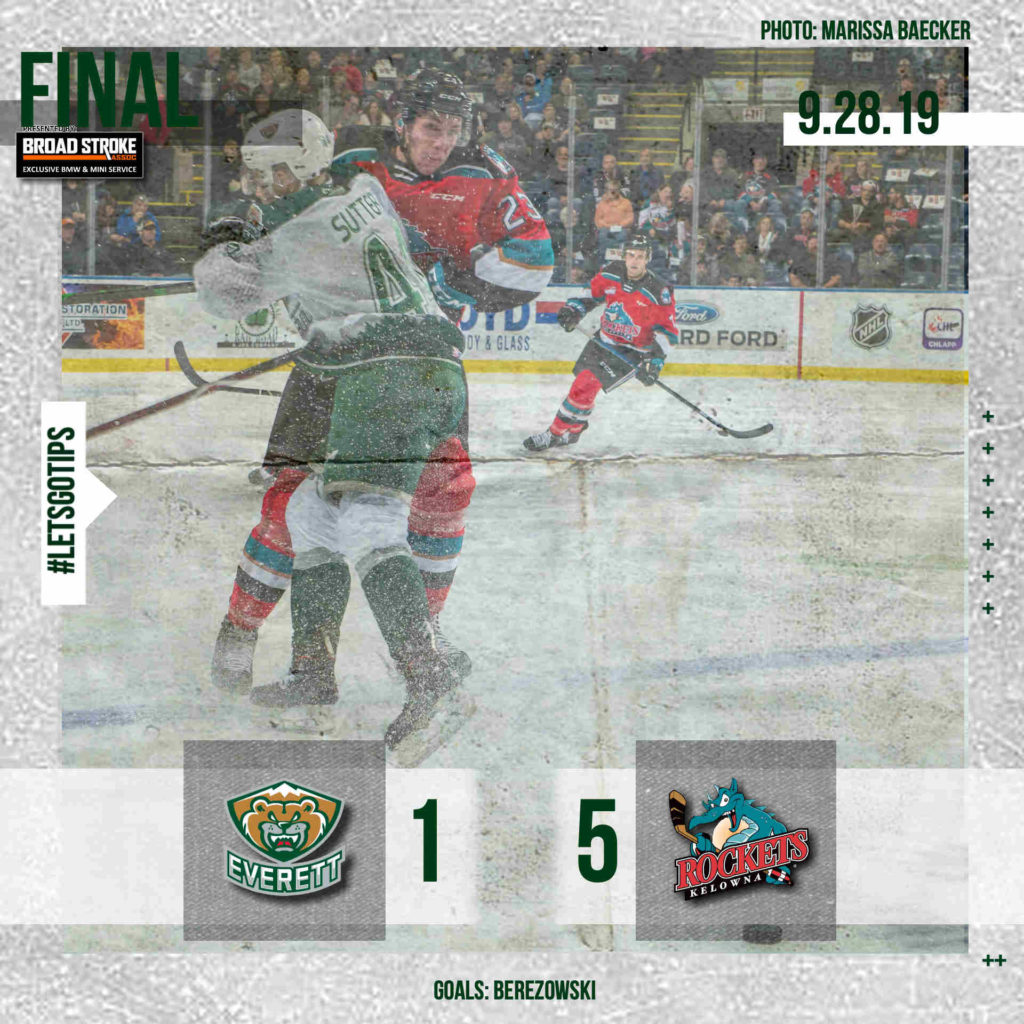 KELOWNA, British Columbia – Kaedan Korczak earned a pair of assists while Roman Basran stopped 26 shots as the Kelowna Rockets defeated the Everett Silvertips, 5-1 on Saturday night before a crowd of 5,011 at Prospera Place in WHL action.

Jackson Berezowski had the only Silvertips goal, a breakaway tally in the third period while Wyatte Wylie extended his points streak to three straight games.

Dustin Wolf turned in an early point-blank save on Kyle Topping to keep the game scoreless and turned in another impressive stop, after Leif Mattson forced a turnover behind the Silvertips net and walked out on a backhanded attempt.

Newcomer Jake Lee’s first goal of the season put the Rockets up, 1-0 at 11:31 on his snap shot off the rush, from the left circle.

Kelowna padded their lead early in the second period on back-to-back tallies, 55 seconds apart for a 3-0 edge. Topping’s third goal of the season, a wrister through traffic came at 2:16 of the second period and Trevor Wong deposited a post-to-post feed into a half open net at 3:11.

Liam Kindree tagged his first goal of the season, on a power play at 17:16 from the left circle for a 4-0 advantage.

The Tips had a 4-on-3 power play to begin the third period but came up empty as Basran delivered a pair of saves to maintain the score. Berezowski finally broke through to get the Tips to within three goals, after Wyatte Wylie sprung the second year Tips forward with a long outlet pass, tape-to-tape. Berezowski opened Basran’s five hole and slipped a forehand deke for his second goal of the season at 13:11.

Sean Comrie finished the scoring with a one-timer from the left point for a power play goal with 25 seconds left in the game.

NOTES: Scratched from the lineup were Braden Holt, Martin Fasko-Rudas, Gianni Fairbrother, Conrad Mitchell, and Michal Gut … the Silvertips loss in regulation was their first in Kelowna since the 2014-15 season, breaking a run of 6-0-1-1 in the last eight visits … the Silvertips earned an edge at the face-off circle, 38-24 and Max Patterson and Gage Goncalves combined to go 27-of-37 … Keegan Karki took over in net for the third period to make his WHL debut and stopped five shots … Seattle native Brendan Lee made his Silvertips and WHL debut, posting a shot on goal and winning his lone face-off taken in the game.

UP NEXT: The Tips continue the four-game road swing after a six-day layoff next Saturday, 7:05 p.m. (KRKO / WHL Live) against the Kamloops Blazers at Sandman Centre and return home on Friday, Oct. 11 for a 7:35 p.m. match-up with the Blazers at Angel of the Winds Arena.