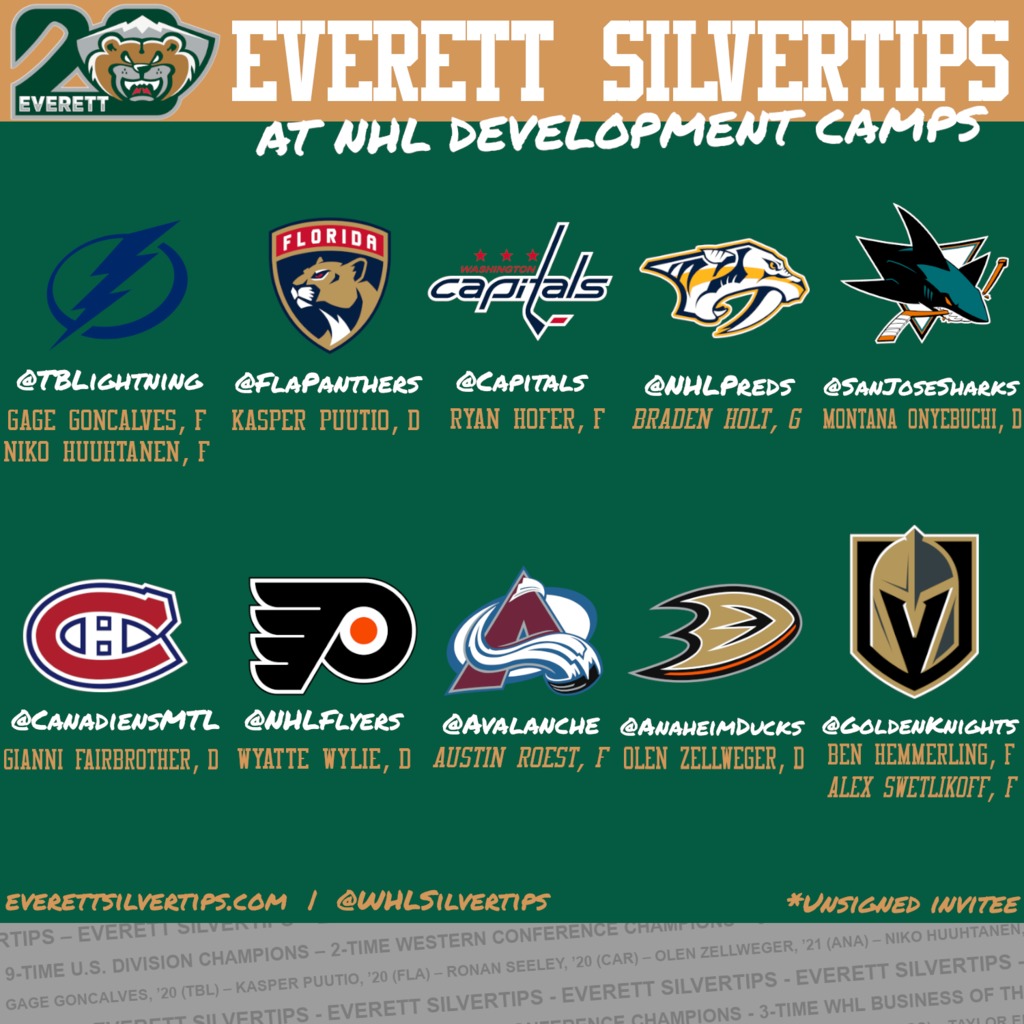 Huuhtanen, the most recent Silvertip, will attend Tampa Bay Lightning Development Camp as the 224th-overall selection in the 2021 NHL Draft. He led all Western Hockey League rookies in goal-scoring with 37 tallies in 2021-22. The #2 overall selection in the 2021 CHL Import Draft, Huuhtanen finished with 77 points in 65 games played including 13 powerplay goals and 19 powerplay assists. The 6-foot-2, 210-pound Finnish winger is signed to play professionally with Jukurit in Liiga next season.

Goncalves, a Silvertip from 2018-21, will join Huuhtanen as a Tampa Bay Lightning prospect, taken 62nd-overall in the 2020 NHL Draft. Goncalves ended his first professional campaign on a tear, ultimately registering 17 goals and 15 assists in 70 regular season games with the AHL’s Syracuse Crunch. His second half was particularly strong, putting up 25 points in 35 games. Goncalves was signed to a three-year Entry Level Contract by the Lightning on Dec. 13, 2020.

Fairbrother, a Silvertip from 2016-21, was drafted by the Montreal Canadiens 77th-overall in the 2019 NHL Draft. Fairbrother proved a solid piece on the blueline for the AHL Laval Rocket, logging a goal and six assists in 25 regular season games played. He signed a three-year Entry Level Contract with the Canadiens on Mar. 1, 2021.

Puutio, a Silvertip for the 2019-20 season, attends Florida Panthers Development Camp as their 153rd-overall pick in the 2020 NHL Draft. Puutio impressed at the professional level with Finland’s KalPa Kuopio last season, posting five goals and five assists in 51 games played. He also participated in the postseason for KalPa U20, recording 11 points in 10 games. Puutio is set to join Finland for the 2022 IIHF World Junior Championship in August, his second appearance at the tournament. He will play the second season of his two-year contract with KalPa in 2022-23.

Montana Onyebuchi, a Silvertip from 2016-18, brought his trademark physical play to the AHL in his first professional season with the San Jose Barracuda. He logged a goal and six assists in 46 regular season games played with 137 penalty minutes- fourth-most in the league. Onyebuchi re-upped his contract in the Sharks organization for one more season on Jun. 21, 2022.

Wyatte Wylie, a Silvertip from 2016-20, attends Philadelphia Flyers Development Camp as the 127th-overall pick in the 2018 NHL Draft. Wylie took great steps forward on defense for the AHL Lehigh Valley Phantoms last season, as the 22-year-old notched five goals and 13 assists in 65 games played. His best outing came on Feb. 4, in which he netted a goal with two assists in a 5-1 home victory over the Providence Bruins. Wylie is entering the final season of his three-year Entry Level Contract with the Flyers.