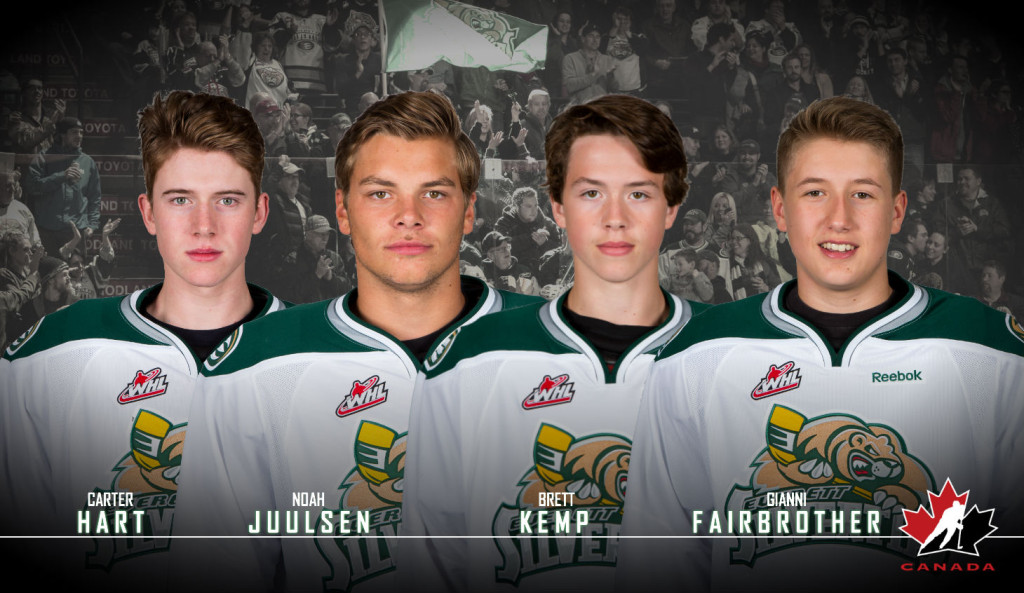 Hart and Juulsen, who will participate in the Showcase for the second straight year, were selected among 41 players to join Canada’s National Junior Team Sport Chek Summer Development Camp in Toronto, July 30-Aug. 2 and play in a four-game series from Aug. 3-6 against the United States, Sweden, and Finland in Plymouth, Mich. The National Junior Team camp will be monitored as part of a selection process for 22 players chosen to represent Canada at the 2017 IIHF World Junior Championship, Dec. 26, 2016 to Jan. 5, 2017 in Toronto and Montreal.

Kemp and Fairbrother, skating in Canada’s Under-17 development camp, are scheduled to be a part of 110 selected players drafted or listed by Canadian Hockey League teams to participate in practices and games against six allotted teams within the camp. Following the development camp, players will continue to be evaluated through the early season before 66 are selected to represent Canada on one of three national teams – Team Canada Black, Team Canada Red, and Team Canada White – at the 2016 World Under-17 Hockey Challenge, Oct. 30 – Nov. 5 in Sault Ste. Marie, Ont.

Silvertips assistant coach Mitch Love, who earned a gold medal last season, will return for his second consecutive season on Hockey Canada’s coaching staff for the World Under-17 Hockey Challenge.

The 6-foot-1, 170-pound goaltender was named Silvertips Most Valuable Player in 2015-16, earning a WHL best 35 wins and was second in goals against average (2.14), tied for second in shutouts (6), and second in minutes (3,693), en route to a 35-23-1-3 record and First Team All-Star selection in the Western Conference of the WHL. He suited up in the CHL/NHL Prospects Game in Vancouver and last summer earned a gold medal with Team Canada at the 2015 Ivan Hlinka Memorial Cup.

Juulsen, 19, was named to the WHL Second All-Star Team of the Western Conference for the WHL’s 50th season. He posted 28 points (7g-21a) and was tied for second on the Silvertips with 11 power play assists in 63 games. Representing Team WHL with Hart at this past season’s Canada-Russia Series, he was selected by the Montreal Canadiens in the first round (26th overall) of the 2015 NHL Entry Draft, skated in one preseason game with Montreal, and returned to post four points (2g-2a) in his first three WHL games this season.

The 6-foot-2, 185 pound defenseman has 90 points (18g-72a) and a +33 rating in 191 career WHL games with the Silvertips. He skated in the 2014-15 CHL/NHL Top Prospects Game and is one of 17 players in Silvertips history to be drafted by an NHL club, earing back-to-back honors as recipient of the Silvertips Most Dedicated Player award.

Kemp, a 2000-born forward, was selected by Everett as their first pick in the second round (41st overall), in the 2015 WHL Bantam Draft and made his Silvertips debut on Mar. 19, 2016 at Victoria. He was named Second Team All-Star with the Yorkton Maulers (SMHL) to cap the 2015-16 season, ranking second in the program and sixth in the league with 51 points (20g-31a) in 42 games, adding to four points (2g-2a) in four postseason games. He suited up for Team Saskatchewan at the Western Canada Under-16 Challenge Cup.

Kemp was third in Saskatchewan with 79 points (37g-42a) in 30 games at the Bantam level for Yorkton in 2014-15, who went 30-1 in the regular season and won the provincial championship to earn a spot in the Western Canadian Bantam Championships.

Fairbrother, a 2000-born blueliner, was awarded Top Defenseman this season in the Canadian Sports School Hockey League (Elite 15s), racking up 18 points (5g-13a) in 35 games to lead the Burnaby Winter Club in scoring among defensemen and ranking second in club playoff scoring with four assists in four games. He also joined Burnaby’s Prep club, notching three assists in five games and posting a pair of assists in his only playoff game.

The 5-foot-10, 174 pound blueliner made his Silvertips debut the second round, Game 3 of the 2016 WHL Playoffs and suited up in three postseason games. He was originally selected by the Silvertips in the fourth round (80th overall) in the 2015 WHL Bantam Draft.

The Silvertips will announce their 2016-17 full regular season schedule soon, offering full season tickets, 22-game, and 14-game plans for as little as $200 total per seat. Priority for seats to the Silvertips 2016-17 home opener, Sept. 24 against the Vancouver Giants at XFINITY Arena, can be secured by locking in a deposit of $50 for Silvertips full season tickets or mini-plans (14-game or 22-game). Seats can be secured by visiting www.everettsilvertips.com/tickets or calling the Silvertips offices at (425) 252-5100.