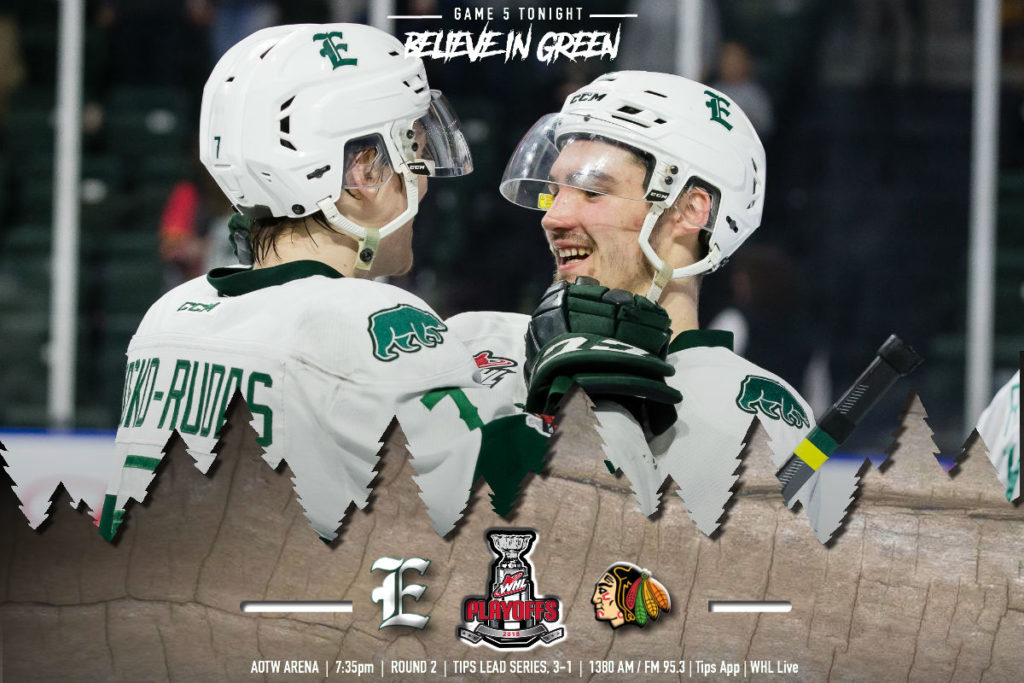 Game 5, second round … sixth lifetime playoff matchup between the two teams, and the third in the last four seasons … the Tips can advance to the Western Conference Final for the third time in franchise history with a win tonight … the Silvertips defeated the Seattle Thunderbirds, 4-1 in the first round … Portland defeated Spokane, 4-3 in the first round … the Silvertips went 5-5-0-0 in the season series against Portland … they went 22-12-2-2 against opponents from the U.S. Division this season … the series features 12 players between the teams that have either been drafted or signed by NHL clubs … the Tips last won a Game 5 situation in the first round of the 2018 WHL Playoffs, vs Seattle (4-0 victory).

The Silvertips welcome back alumnus, defenseman, and special guest Noah Juulsen to downtown Everett … Juulsen suited up for the Silvertips between 2012-17 and made his NHL debut with the Montreal Canadiens this season.

THE SERIES IN A NUTSHELL

GAME 1 (POR 5 – EVT 2 / 4-6-18): The Everett Silvertips were unable to recover from a three goal deficit and the Portland Winterhawks used goals from five different sources to defeat the Tips, 5-2 before 4,286 fans at Angel of the Winds Arena in Game 1 of the second round of the 2018 WHL Playoffs. Matt Fonteyne and Sean Richards scored goals for the Tips in the second period, who nearly climbed completely out of a 3-0 hole. SHOTS: POR 36 – EVT 34

GAME 2 (EVT 6 – POR 0 / 4-7-18): Patrick Bajkov earned his first career playoff hat trick, added an assist, and Carter Hart turned in his fourth career playoff shutout on 26 saves as the Everett Silvertips cruised to a 6-0 victory over the Portland Winterhawks in Game 2 of the second round of the WHL playoffs in front of 5,631 fans at Angel of the Winds Arena. The Silvertips tied the series, 1-1. The Tips earned their largest margin of victory, bouncing back one night after dropping a 5-2 loss on home ice in Game 1. Martin Fasko-Rudas, Garrett Pilon and Sean Richards spelled the offense with a goal each, while Matt Fonteyne earned a pair of assists. SHOTS: EVT 32 – POR 26

GAME 3 (EVT 6 – POR 2 / 4-10-18): Riley Sutter scored twice in a three goal first period, and Carter Hart made 40 saves to lift the Everett Silvertips to a 6-2 victory over the Portland Winterhawks in Game 3 of the second round of the WHL Playoffs before 4,453 fans at Veterans Memorial Coliseum on Tuesday. The Tips lead the best-of-seven series, 2-1. Kevin Davis manufactured a pair of assists and was +3 from the blueline while 12 different Silvertips recorded a point in the game. The Silvertips improved to 3-0 on the road during the WHL Playoffs. SHOTS: POR 42 – EVT 28

GAME 4 (EVT 3 – POR 2 / 4-12-18): Wyatte Wylie busted a tie game with 1:12 left in regulation, completing an insane comeback of two goals in a span of 46 seconds to lift the Everett Silvertips to an incredible 3-2 victory in Game 4 over the Portland Winterhawks before 7,312 fans at Moda Center on Thursday in second round WHL Playoff action. The Silvertips took the lead in the best-of-seven series, 3-1. The Tips launched their comeback just nine seconds after Henri Jokiharju put the Winterhawks ahead with 2:07 left on a power play goal. Garrett Pilon banged in a rebound to tie the game with 1:58 left, then Wyatte Wylie’s right point shot snuck through traffic with 1:12 to play. SHOTS: POR 44 – EVT 26

THE SILVERTIPS IN ROUND ONE (DEFEATED SEATTLE, 4-1)

GAME 1 (EVT 4 – SEA 1 / 3-23-18): The Everett Silvertips jumped out in front of the Seattle Thunderbirds early and maintained a sizeable lead throughout the game in a 4-1 victory, in Game 1 of the WHL Playoffs first round before 4,247 fans at Angels of the Winds Arena on Friday night. Patrick Bajkov was the first star of the game with a pair of goals, while Garrett Pilon and Bryce Kindopp each earned a goal. Matt Fonteyne collected 3 assists. SHOTS: EVT 46 – SEA 26

GAME 2 (SEA 5 – EVT 4 (OT) / 3-24-18): Garrett Pilon’s hat trick forced overtime with less than a minute left in regulation but Zack Andrusiak’s winner at 5:04 helped the Seattle Thunderbirds sneak by the Everett Silvertips, 5-4 in sudden death overtime before 5,694 fans at Angels of the Winds Arena on Saturday night … the best-of-seven series is tied, 1-1 … Pilon’s hat trick was the first in postseason for the Tips since Carson Stadnyk accomplished his against Spokane, Mar. 27, 2015 against the Spokane Chiefs. Martin Fakso-Rudas got the other Tips goal while three separate Tips registered multi point games. SHOTS: EVT 49 – SEA 33

GAME 3 (EVT 3 – SEA 1 / 3-27-18): Matt Fonteyne scored twice and Carter Hart furnished 33 saves to lift the Everett Silvertips to a 3-1 victory and a 2-1 series lead over the Seattle Thunderbirds before 5,600 fans at accesso ShoWare Center on Tuesday night in WHL Playoff action. The Silvertips recovered from an early 1-0 deficit and 22 shots by Seattle in the first ten minutes before Reece Vitelli tied the game. They recaptured home ice advantage in the series and outshot Seattle, 25-10 in the final 40 minutes. SHOTS: EVT 37 – SEA 34

GAME 4 (EVT 7 – SEA 3 / 3-30-18): The Everett Silvertips took a commanding lead in the first period with three goals and the Seattle Thunderbirds were unable to cue the comeback, in a 7-3 Silvertips victory in Game 4 of the WHL Playoffs’ first round before 4,175 fans at accesso ShoWare Arena on Friday night. Seven different Silvertips scored in the game, producing a wire to wire effort while Connor Dewar, who scored the first penalty shot goal in Silvertips playoff history, earned first star honors with a goal and pair of assists. Kevin Davis earned third star honors on the backend with a goal and an assist, and was +3 on the evening. SHOTS: EVT 36 – SEA 31
GAME 5 (EVT 4 – SEA 0 / 3-31/18): The Everett Silvertips eliminated the Seattle Thunderbirds in a 4-1 series victory, winning Game 5, 4-0 before 6,179 fans at Angel of the Winds Arena in downtown Everett on Saturday in WHL Playoff action. The Silvertips have advanced to the second round for the fourth straight season, knocking out their U.S. Division rivals by outscoring the Thunderbirds, 11-3 in the final two games. Carter Hart had his third career playoff shutout with 36 saves. Connor Dewar had his second consecutive three point game and Riley Sutter earned the game winning goal. SHOTS: EVT 46 – SEA 36

Six different Western Conference Awards and four different Silvertips were honored by the WHL on Mar. 21: