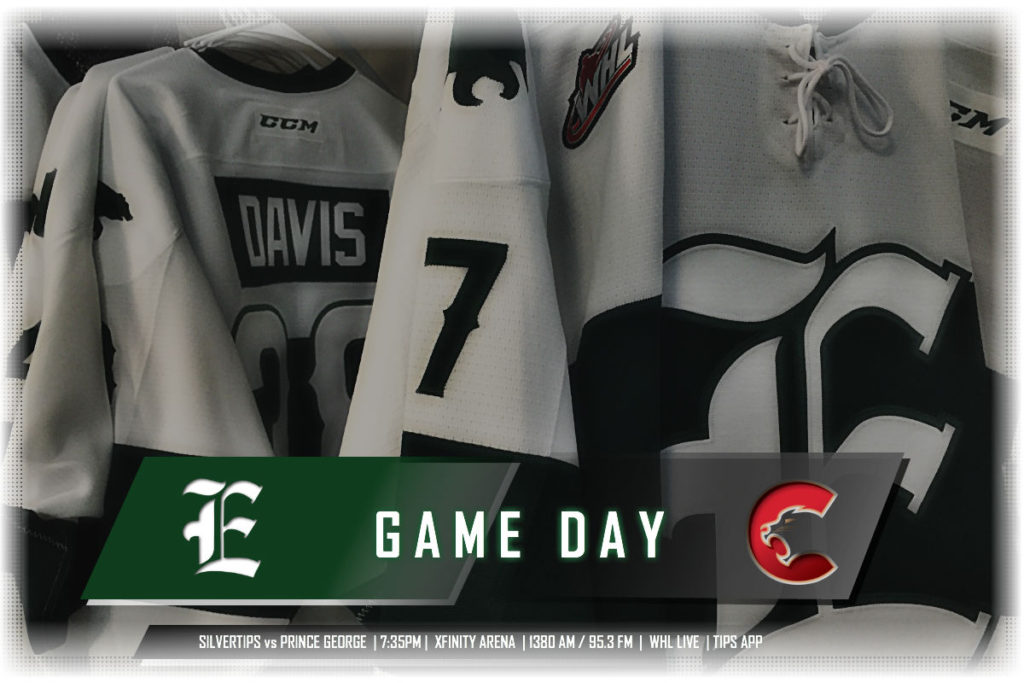 The Silvertips host the Prince George Cougars in the final game of their homestand and the finale of a four game season series … the Silvertips are 10-1-2 in their last 13 games and carry the top record in the WHL and are first place in the U.S. Division … the Silvertips entered the day carrying the #3 spot in the CHL Top 10 rankings … they are 17-2-1-0 at home and are 8-2-5 on the road … the Silvertips are 9-0-3 against teams from the B.C. Division.

The Silvertips will be wearing a specialty “throwback style” jersey tonight, with all game worn models available for purchase to the pubic … more details are available at www.everettsilvertips.com/throwback.

In the house tonight: welcome back @dangendur71!

Defenseman Noah Juulsen and goaltender Carter Hart were named to Canada’s roster for the 2017 IIHF World Junior Championship … the Silvertips duo are a part of 22 total players who earned a spot on Canada’s roster, who opened the tournament against Russia (5-3 win) at Air Canada Centre in Toronto on Dec. 26 … this year, the gold medal game will be hosted in Montreal … the Silvertips are the only team in the WHL to have more than one player represented on Canada’s roster … the last Silvertip to appear in the WJC (top level) was defenseman Mirco Mueller (Switzerland) in 2014.

BY THE NUMBERS – THE TIPS RECORD, WHEN THEY SCORE A GOAL:

CARTER HART, AMONG THE SILVERTIPS LEADERS:

Kevin Constantine is in his eighth season overall as head coach of the Silvertips, ranking as the club’s all-time leader in wins (307) and posting a record of 307-170-61 in his Everett career. All four of the Silvertips’ division titles have been achieved with Constantine as head coach, most recently in 2014-15 which was Everett’s first since 2006-07. He was the recipient of the Dunc McCallum Trophy (WHL Coach of the Year) in 2003-04, when the Silvertips broke nearly every WHL expansion record and became the first expansion team in WHL history to win a division title. Constantine has coached in the NHL over the course of seven seasons with San Jose, Pittsburgh and New Jersey, helping guide all three clubs to an appearance in the Stanley Cup Playoffs.

HOW THE SILVERTIPS WERE BUILT