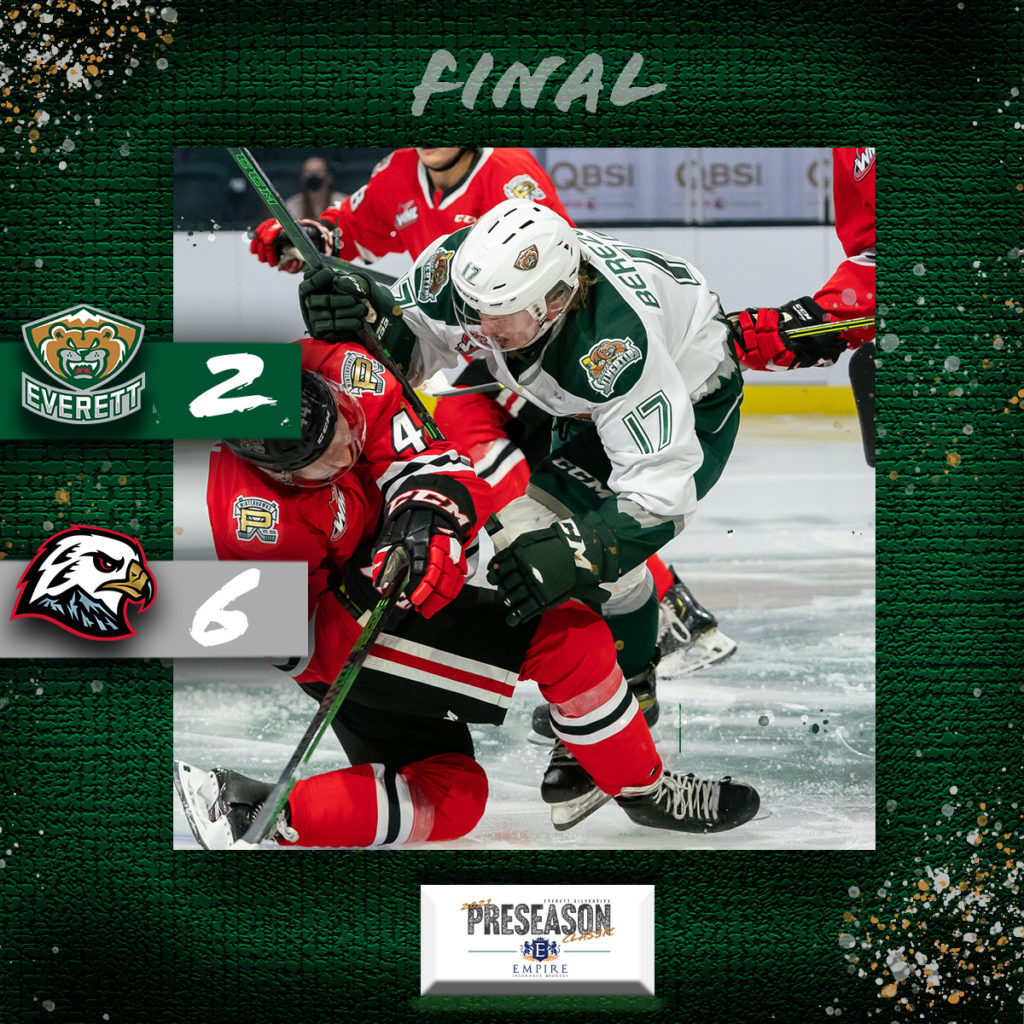 EVERETT, Wash. – Dante Giannuzzi and Lochlan Gordon split duties in net with 22 saves apiece and the Portland Winterhawks used three first period goals to defeat the Everett Silvertips, 6-2 on the final day of the Silvertips Preseason Classic presented by Empire Insurance Brokers on Sunday at Angel of the Winds Arena.

Newcomer and the second overall import pick, Niko Huuhtanen, earned a goal with an assist while Jackson Berezowski tallied a third period goal for the Silvertips, 1-2 in the pre-season. Portland swept their way through both games of their weekend, resting Saturday after a 5-1 victory on Friday over Seattle.

With the Silvertips finishing their third game in three days while missing Olen Zellweger (Anaheim), Ronan Seeley (Carolina), and Braden Holt (Toronto) to NHL camps, the Winterhawks got to work quickly in the first period, scoring three goals on their first five shots. Marcus Nguyen scored on Portland’s first shot of the game after a turnover at their own blueline, converting a snap shot from the right wing at 1:12 for a one goal lead.

Robbie Fromm-Delorme then finished Luca Cagnoni’s centering pass from behind the net, on the doorstep with 14:18 left to put Portland up 2-0.

Portland continued their surge in the first eight minutes and boosted the lead to 3-0 on Aidan Litke’s deflection at the goal mouth. However, Niko Huuhtanen responded for the Tips on a two-man advantage, ripping a one-timer from the left circle past Dante Giannuzzi for his first pre-season goal and a two-goal deficit, with 9:04 left in the period.

The Silvertips pressed to cut the deficit to a goal late in the period but missed on a pair of chances, and after a squandered power play early in the second period, Portland pushed the lead to 4-1 on a Josh Zakreski breakaway with 16:36 left. Luke Schelter then buried Rhett Ravndahl’s feed to the right post with 13:41 left for a 5-1 lead.

Jackson Berezowski drew a penalty in the offensive zone just as time expired which proved beneficial as soon as the third period got underway for a four-on-three situation. Moments after both teams gained a man back to change the scenario to five-on-four, Berezowski screened new goaltender Lochlan Gordon, and caught a piece of Alex Swetlikoff’s feed from the right circle for a power play goal at 1:05 and three-goal deficit.

Portland had one final answer 4:04 into the period on a delayed penalty, pushing the lead to 6-2 on a Ryder Thompson goal, a rebound at the crease.