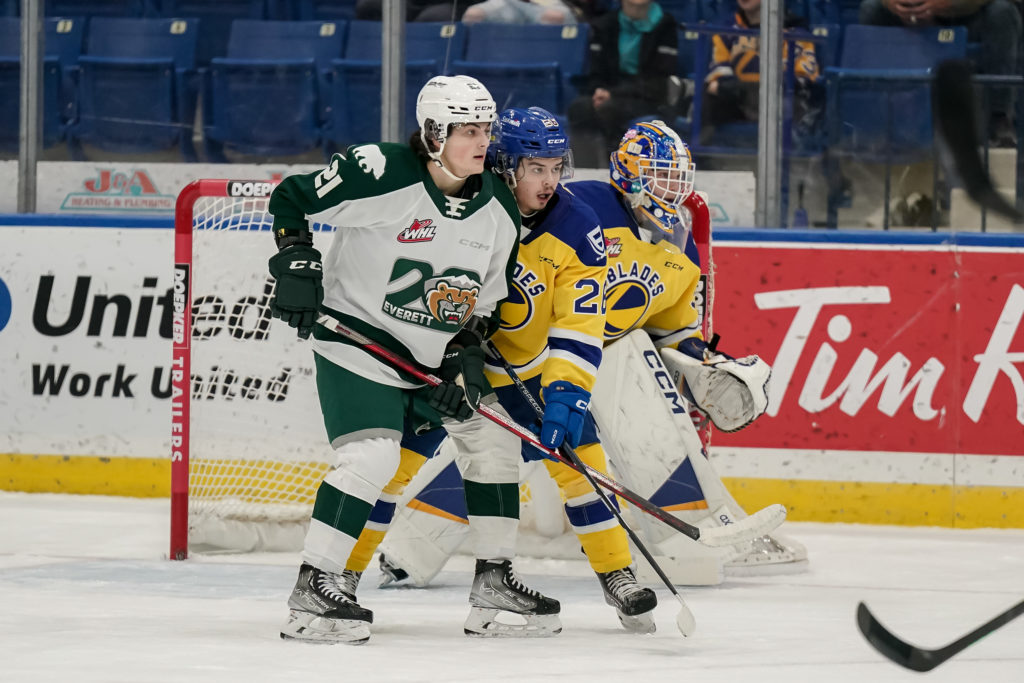 SASKATOON, SK — Steel Quiring made his 100th career regular season WHL contest memorable, as the ’03-born winger scored the game-winner for Everett in a 5-3 victory over the Saskatoon Blades Friday night.

Austin Roest opened the scoring 3:25 into the first period, sniping a wrist shot over the shoulder of netminder Ethan Chadwick for his 13th goal of the season in just 15 appearances. Ty Gibson extended the lead just 21 seconds into the second period, wiring a wrist shot through traffic for a 2-0 advantage.

Austin Roest is HIM 😤

13 goals in 15 games now for the Roester!#ForEverettpic.twitter.com/PSN3IkUxrF

Brandon Lisowski pulled the Blades within one 5:26 into the second period while on a 5-on-3 powerplay, but a crisp passing play from Jesse Heslop to Roest in the slot down low to Berezowski resulted in a backhand goal by the Tips’ captain. Berezowski’s tally gives him 12 on the season and seven in his last seven games played.

Saskatoon would pull within one at 6:05 in the third period, as Trevor Wong batted in a bouncing puck. Steel Quiring, playing in his 100th career game, restored the two-goal lead with a quick shot off a face-off win by Vincent Lamanna, scoring his second of the season.

Though Jordan Keller would cut the lead to one at 13:09, Gibson banked a long clearance off his own mid-boards and into the Saskatoon empty net to seal the 5-3 win.

Roest now has points in 14 of 15 games played this season. He sits tied with Reid Schaefer (SEA) and Connor Bedard (REG) for the league lead in goals with 13, while trailing Bedard by only two points for the overall scoring lead with 27.