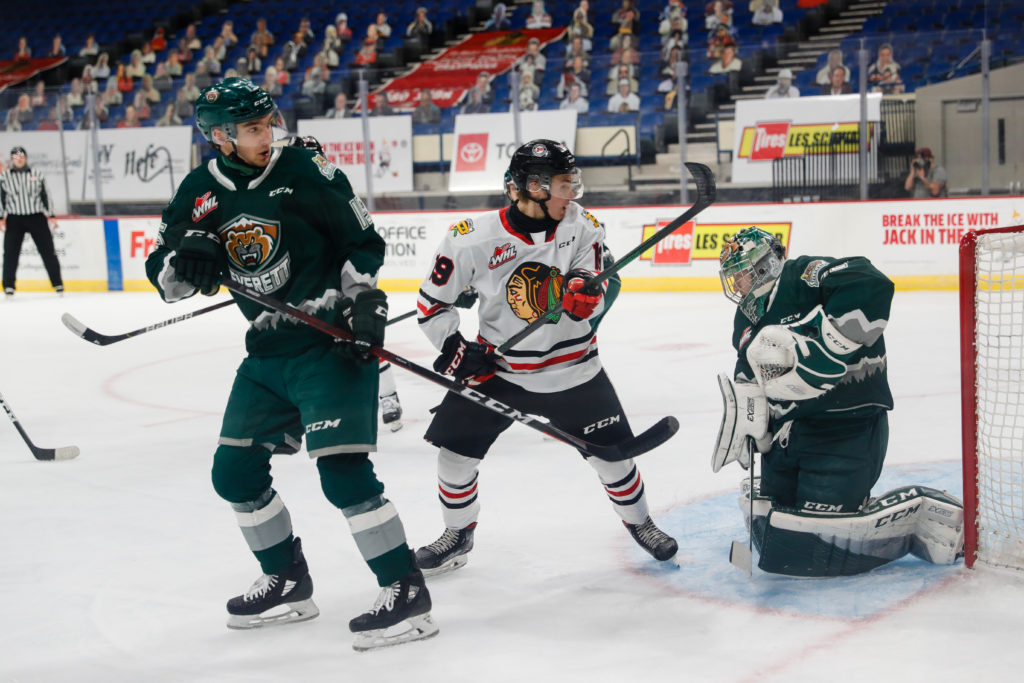 The Silvertips, on the cusp of winning their eighth U.S. Division title, can still clinch while idle on Saturday if the Tri-City Americans defeat the Winterhawks in regulation. Hunter Campbell and Jackson Berezowski scored for the Silvertips in the first period, who finished the head-to-head series at 5-1 against the Winterhawks.

UP NEXT: The Tips visit Spokane on Sunday, 5:10 p.m. (KRKO/WHL Live) for their next game, their final visit of the season to Spokane Arena. Viewing packages remain on sale at watch.chl.ca. Play-by-play “Voice of the Tips” Mike Benton will have pre-game coverage beginning 30 minutes before puck drop.

Campbell slammed in a centering pass by Ethan Regnier from behind the net at 10:13 of the first period for a 1-0 lead, and the Tips surge to victory took another significant step on Berezowski’s power play goal with 43.3 seconds left for a 2-0 lead. After a face-off win, Regnier directed the puck into the right corner, where Cole Fonstad quickly bumped it to Berezowski in the slot. Berezowski then finished a one-timer past Dante Giannuzzi.

Portland got back into the game on Simon Knak’s tough angle shot off the left goal line, deflecting to the back of the net for a one-goal game at 11:24 of the second period. The Silvertips responded with an apparent 3-1 lead on a Ryan Hofer wrap-around, but the goal was waved off which kept the lead to one goal.

The Tips carried the score into period three, but surrendered the lead on Jonas Brøndberg’s point shot that skipped off Simon Knak’s screen with 6:50 left, and then fell behind, 3-2 when Mason Mannek, stationed at the right circle, snuck his eighth goal of the season through traffic and Dustin Wolf.

Kade Nolan put Portland ahead 4-2 with an empty netter with 1:38 left in regulation and Tyson Kozak’s rebound goal with 1:08 left sealed the game.

GAME NOTES: Silvertips scratches included U18 departures Braden Holt and Olen Zellweger, while Max Graham, Brady Van Herk and Brendan Hunchak were healthy scratches … Fonstad extended his point streak to 11 consecutive games … the 5-1 record vs. Portland this season marked only the second time in Tips history they lost just once in regulation to Portland in a season series (previous: 2007-08).