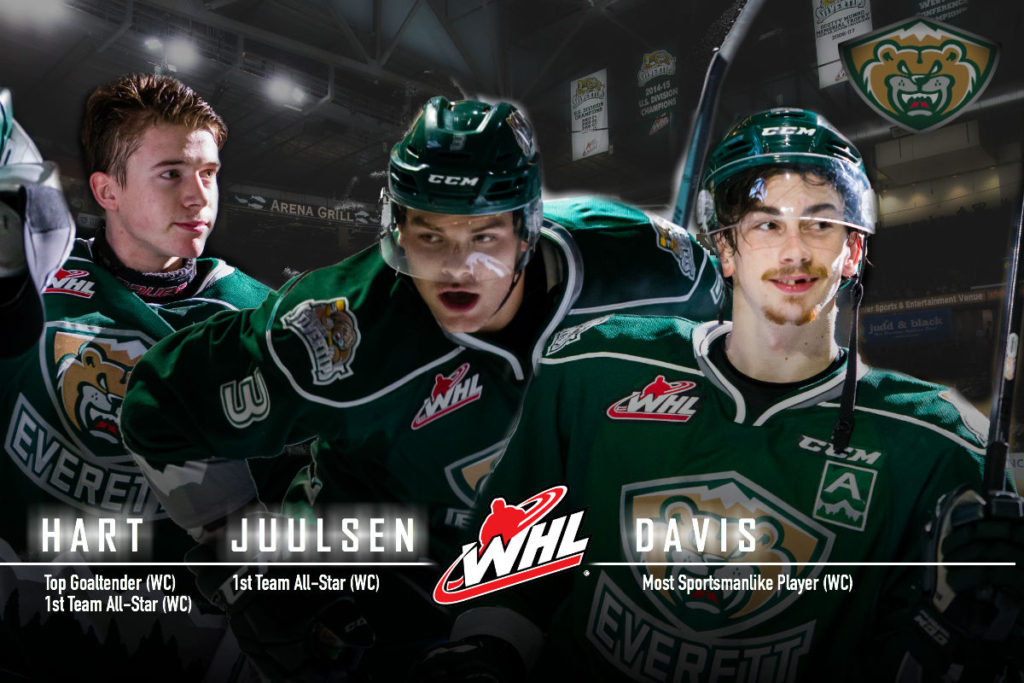 All individual conference winners are eligible for League awards, presented Wednesday, May 3 in Calgary at the 2017 WHL Awards ceremony.

Hart, eligible for back-to-back WHL Goaltender of the Year honors, led the league in shutouts (9), goals-against-average (1.99), was tied for the league lead in save percentage (.927) and went 32-11-6-2 in 54 games this season while helping guide the Silvertips to their second U.S. Division title in three years.

Hart, named Silvertips Most Valuable Player in back-to-back seasons, was the first goaltender selected in last year’s National Hockey League Entry Draft, selected by the Philadelphia Flyers in the second round (48th overall).

Juulsen, 19, also helped guide the Tips to their second division title in three seasons – this year as captain – and furnished 34 points (12g-22a), a career high 12 goals, and a +15 rating in 49 games while teaming with Hart to help guide Team Canada to the silver medal at this season’s World Junior Championships in Montreal and Toronto.

The 6-foot-3, 190 pound defenseman was named Silvertips Most Dedicated Player for the third straight year this season and was selected by the Montreal Canadiens in the first round (26th overall) of the 2015 NHL Entry Draft.

Davis, who turned 20 on Mar. 14, had just 14 penalty minutes while never missing a game this season, additionally ranking third on the Silvertips in scoring and tied for eighth among WHL defensemen with 59 points (9g-50a). His 29 power play assists were tied for the lead and 37 points were second among league defensemen.

The 6-foot, 180 pound defenseman was named recipient this season of the Silvertips Most Improved Player award and the Tips Iron Man award.

Earning the top record in the Western Conference after capturing their fifth U.S. Division title in 14 seasons, the Silvertips open the WHL Playoffs at XFINITY Arena in Game 1 of the first round against the Victoria Royals, starting at 7:35 p.m. this Friday. Doors will open at 6:00 p.m. Ticket packs are on sale at www.everettsilvertips.com/playoffs.