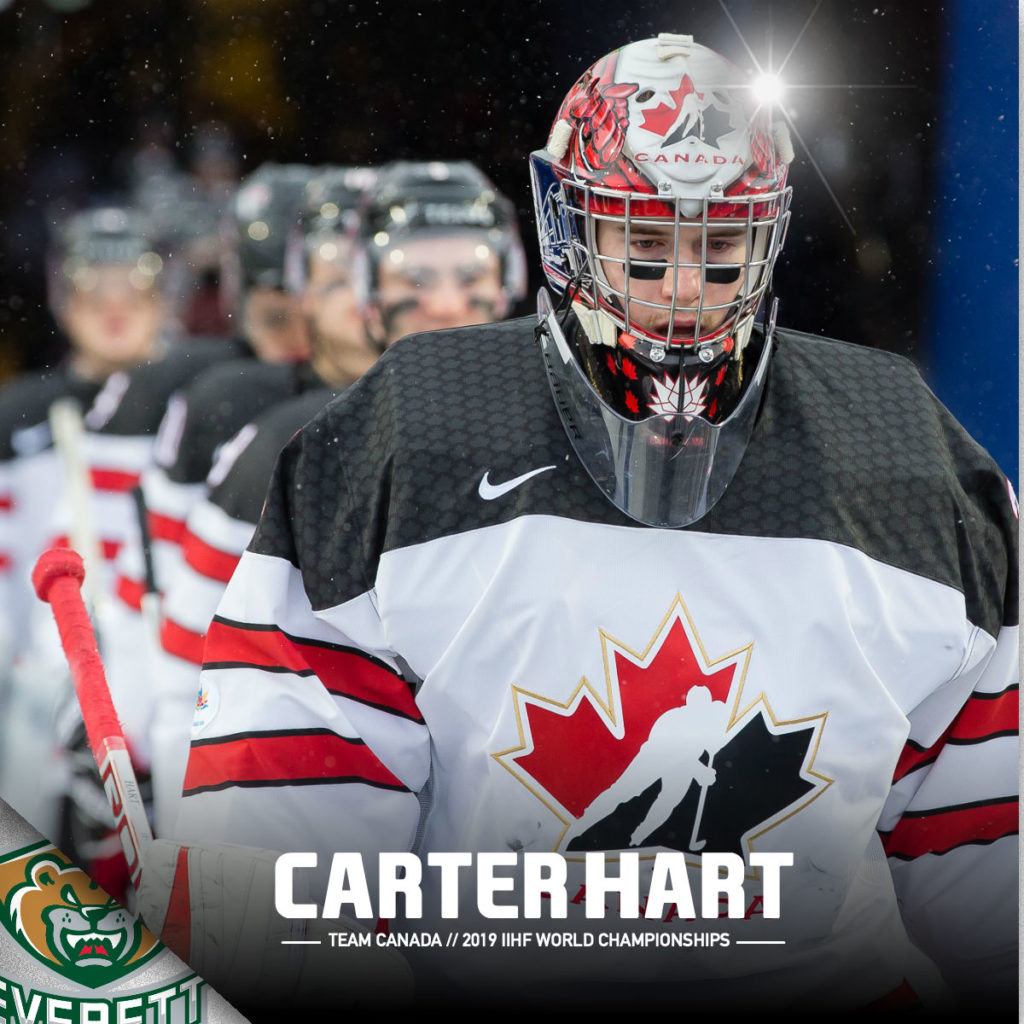 EVERETT, Wash. – The Everett Silvertips (@WHLSilvertips), proud member of the Western Hockey League and seven-time U.S. Division champions, announced today in conjunction with Hockey Canada that goaltender and Silvertips alumnus Carter Hart, who suited up in Everett for four full seasons (2014-18), has been named to Team Canada for the upcoming 2019 IIHF World Championships, May 10-26 in Slovakia.

Hart, who became the 19th player in Silvertips history to make his NHL debut this season, is one of 22 players named to Canada’s roster by the team’s management group, including Jason Botterill, Ron Francis and Ron Hextall – along with Tom Renney, chief executive officer with Hockey Canada, Scott Smith, president and chief operating officer with Hockey Canada, in consultation with the coaching staff that includes head coach Alain Vigneault and assistant coaches Dave Hakstol, Kirk Muller and Lindy Ruff. Rosters were confirmed following the conclusion of the NHL regular season and first round of the Stanley Cup Playoffs.

“It’s always a special opportunity when you get the call to represent your country on the international stage,” said Botterill. “This roster is a mix of youth and veterans who will help lead the way in this short-term competition. Our coaching staff is excited to work with these players as we get set for a competitive tournament in Slovakia starting May 10.”

Hart is one of three goaltenders (Matt Murray of Pittsburgh/NHL and Mackenzie Blackwood of New Jersey/NHL) on Team Canada’s roster, and is one of 16 players who participated in the World Junior Championships, including seven with a gold medal earned in their careers. Hart captured the gold medal with Team Canada in his final season as a Silvertip, 2017-18, going 5-0-0-1 in six tourney games with a 1.64 goals-against-average and .935 save percentage.

Before becoming the youngest goalie in Flyers history to earn a win in his NHL debut and capturing first star of the game honors on Dec. 18, the native of Sherwood Park, Alberta went 116-46-10-2 with a .927 save percentage, 2.01 goals-against-average and 26 career shutouts in 190 WHL games, all with the Silvertips. He is the franchise goaltending leader in wins (116) and is tied for the WHL all-time lead in shutouts (26).

Last season, Hart helped guide the Silvertips to their sixth U.S. Division title and second Western Conference championship, became the first goaltender in Tips history to earn the Four Broncos Memorial Trophy (WHL Player of the Year), and the first goaltender in WHL history to earn the Del Wilson Trophy (WHL Goaltender of the Year) on three consecutive occasions.

He earned the CHL Goaltender of the Year award for the second time in three seasons, named WHL First Team All-Star and was honored with his third straight Silvertips Most Valuable Player Award.

Hart and Team Canada will open training camp in Vienna, and participate in a pre-tournament game on May 7 vs. Austria.

TV COVERAGE: The World Championships will be carried on television by TSN and RDS (check local listings).