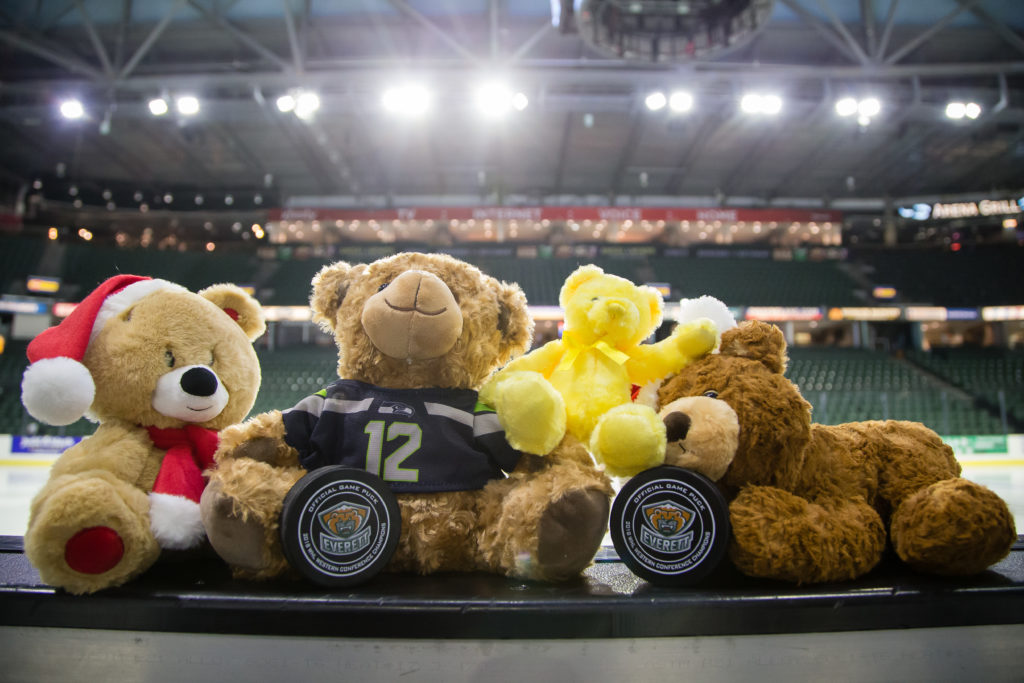 EVERETT, Wash. – The Everett Silvertips (@WHLSilvertips), seven-time U.S. Division champion and two-time Western Conference champion of the Western Hockey League, will open a four-game homestand on Saturday, Dec. 14 at Angel of the Winds Arena for Teddy Bear Toss presented by ACE Hardware, 7:05 p.m. against the Vancouver Giants and will return to play on Sunday, 4:05 p.m. against the Spokane Chiefs for Silvertips beanie giveaway presented by BECU.

Tickets are on sale with a large crowd expected for Saturday, available at the link below. Featured for Sunday’s game, is a “Now & Later” ticket offer, presenting one bonus flex ticket voucher for every two tickets purchased:

The Silvertips return Teddy Bear Toss presented by ACE Hardware, where upon the first goal scored by the Silvertips in the game, all fans in attendance are encouraged to throw new or gently used stuffed animals onto the ice to be collected and distributed with local charitable support to underprivileged families and children in the region during the holiday season. The Silvertips Teddy Bear Toss, renewed for the fifth straight season, is designed to collect new or gently used stuffed animals to donate to support the Christmas House organization and Seattle Children’s Hospital along with distribution assistance from WARM 106.9’s Teddy Bear Patrol.

Fans bringing stuffed animals to the game, for Teddy Bear Toss are strongly encouraged to wrap stuffed animals in plastic bagging for efficient ice maintenance. Wrapping stations will also be available along the concourse of Angel of the Winds Arena.

Last season, a franchise record 9,719 stuffed animals were donated through Teddy Bear Toss after Martin Fasko-Rudas scored a first period goal, 7:57 into the game in a 6-1 victory over the Seattle Thunderbirds before a sellout crowd of 8,133 in downtown Everett. The Silvertips have helped collect and donate over 34,700 stuffed animals since the return of Teddy Bear Toss to downtown Everett in 2015-16.

Teddy Bear Toss will occur at the end of the second period if the Silvertips are without a goal scored through two periods.

On Sunday, the Silvertips will host the next Smile Gen Family Fun Zone for the 4:05 p.m. game against Spokane, hosting family hockey stations at the bottom of the grand staircase of A.O.T.W. Arena (located nearby the Silvertips Team Store). Activities such as sign making, floor hockey, and additional kid-friendly attractions will be available from pre-game warm-ups until the start of the third period (approximately 3:30pm – 5:30pm).

The first 750 fans in attendance at the doors will also receive a Silvertips beanie, presented by BECU.

UP NEXT: The Tips finish their five-game road stretch against the Portland Winterhawks tonight, 7:00 p.m (KRKO / WHL Live) at Moda Center.